Congenital deficiency of any anticoagulant protein has not been recognized in domestic animals. If such a condition exists in animals, it is probably incompatible with life.

The presence of hypercoagulability is difficult to assess clinically in dogs and cats, and the importance of hypercoagulability and thromboembolic disease had not been well defined in veterinary medicine until the arrival of thromboelastography Thromboelastography (TEG) Effective hemostasis depends on an adequate number of functional platelets, an adequate concentration and activity of plasma coagulation and fibrinolytic proteins, and a normally responsive... read more (TEG). Thromboelastography enables global assessment of hemostatic function in whole blood. Advantages include the evaluation of the viscoelastic properties of the developing blood clot (including clot formation, kinetics, strength, stability, and resolution) and immediate detection of hyper- and hypocoagulable states.

Certain diseases in animals have been associated with increased risk of thrombosis. Cats with cardiomyopathy, especially those with an enlarged left atrium, can develop large thromboemboli in the aorta or brachial artery. Thrombosis has been seen in dogs with protein-losing nephropathies, hyperadrenocorticism Cushing Disease (Pituitary-dependent Hyperadrenocorticism) in Animals Cushing disease is hyperadrenocorticism caused by an ACTH-secreting tumor of the pituitary gland. Clinical signs include polyuria, polydipsia, alopecia, and muscle weakness. A low-dose dexamethasone... read more

. Thrombi and thromboemboli have been seen in horses with systemic inflammatory diseases (such as colic Overview of Colic in Horses Depiction of a horse’s GI tract as viewed from the right side. In its strictest definition, the term “colic” means abdominal pain. Throughout the years, it has become a broad term for a variety... read more

, laminitis Laminitis in Horses The horse hoof. Median section through the horse digit. Equine laminitis is a crippling disease in which there is a failure of attachment of the epidermal laminae connected to the hoof wall... read more 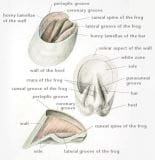 , or equine ehrlichial colitis Potomac Horse Fever Potomac horse fever (PHF) is an acute enterocolitis syndrome producing mild colic, fever, and diarrhea in horses of all ages, as well as abortion in pregnant mares. The causative agent is Neorickettsia... read more ) and in instances of prolonged jugular catheter placement and infusion of drugs that irritate the vasculature.

Neoplasia is a risk factor for hypercoagulability and likely associated complications, such as thromboembolic disease. Many of the cells and proteins involved in maintaining hemostasis are also involved in the processes of cancer growth, invasion, metastasis, and angiogenesis. Deep venous thrombosis is a significant clinical complication in human cancer patients, but whether this is true in dogs with cancer is unknown.

In protein-losing nephropathies (eg, glomerulopathies, nephrotic syndrome, renal amyloidosis), a deficiency of antithrombin has been well documented. Antithrombin has a molecular weight of 57,000 kilodaltons (kD), which is similar in size to albumin (60,000 kD); therefore, glomerular lesions sufficient to result in albumin loss also result in loss of antithrombin. Other abnormalities identified in renal disease include increased responsiveness of platelets to agonists, increased procoagulant activities, and decreased antiplasmin activity.

Hypercholesterolemia has been associated with increased risk of thromboembolism. It is hypothesized that endothelial and platelet membrane phospholipid concentrations are altered, which leads to damaged vasculature and increased platelet responsiveness to agonists, respectively. Increased production of thromboxane via the cyclooxygenase pathway in platelets has been seen. Diseases characterized by hypercholesterolemia include hyperadrenocorticism, diabetes mellitus, nephrotic syndrome, hypothyroidism, and pancreatitis. All have been associated with increased risk of thrombus formation, often pulmonary thrombosis.

In cats with cardiomyopathy,endomyocardial lesions and turbulent blood flow through the heart chambers and valves secondary to altered myocardial functioning are thought to initiate thrombus formation. Specific deficiencies of anticoagulant or fibrinolytic proteins have not been seen. Interestingly, antithrombin is markedly increased but does not provide protective benefits. Cats with cardiac disease secondary to hyperthyroidism are often treated with drugs (eg, propranolol, atenolol, or diltiazem) that abate clinical signs of cardiac dysfunction. These drugs appear to protect against increased risk of thrombosis by altering platelet responsiveness to agonists.

Horses with colic associated with endotoxemia have decreased plasminogen activity and protein C antigen concentration. These horses have increased mortality and risk of thrombus formation. Laminitis is thought to be the end result of several diverse systemic disorders. Microthrombi in the vasculature of the hoof lamina have been identified in the early stages of laminitis. One theory is that endotoxin has direct effects on the vasculature and activates contact factors in the coagulation cascade. Ischemia of the lamina secondary to edema, vascular compression, and possible blood shunting at the level of the coronet also damage endothelium. When circulation is reestablished, reperfusion injury results, and the exposed subendothelial collagen promotes thrombosis.

The most appropriate treatment of an animal with thrombi or thromboemboli is diagnosis and management of the underlying disease process, along with good supportive care, including pain management. Maintenance of adequate tissue perfusion is critical. Dissolution of clots and prevention of clot recurrence by administration of anticoagulants (eg, heparin, coumarin, and clopidogrel) has had mixed success. Unfractionated heparin is most commonly used as initial treatment. Low molecular weight heparins have been evaluated in cats with aortic thromboembolism, but cost is significantly higher and no clear benefit has been shown when compared with unfractionated heparin. Heparin facilitates the action of antithrombin, but to be effective, adequate antithrombin must be present. In dogs with protein-losing nephropathies or in horses with endotoxemia, plasma transfusion may be necessary before heparin therapy is effective. Coumarin, which requires 1–2 days to become active, has been useful for control or prevention of recurrence rather than for acute treatment.

Fibrinolytic compounds have been administered to animals to enhance dissolution of clots. Tissue plasminogen activator (TPA) has more fibrin specificity than does streptokinase or urokinase and, therefore, provides more localized fibrinolytic effects. The main deterrent to use of TPA is its high cost. One study of cats with aortic thrombosis treated with TPA found a risk of reperfusion injury and hyperkalemia after the clot dissolved. Streptokinase is more available and less expensive, but the therapeutic dose is difficult to determine. Many animals have naturally occurring antibodies to streptokinase as a result of previous streptococcal infections.

More recently, drugs have been developed that inhibit activated factor X ( eg, rivaroxaban and apixaban). These drugs can be administered orally and do not require frequent monitoring. Although effective in human patients, they have had limited use in cats or dogs. Currently, the only treatment shown to increase survival time after the initial thrombotic event in cats is clopidogrel (18.75 mg/cat PO once daily), which inhibits platelet function. It has been shown to be more potent and safer than aspirin.

Overview of Leukocyte Disorders in Animals