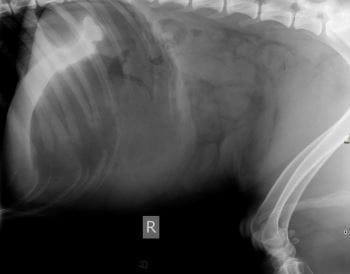 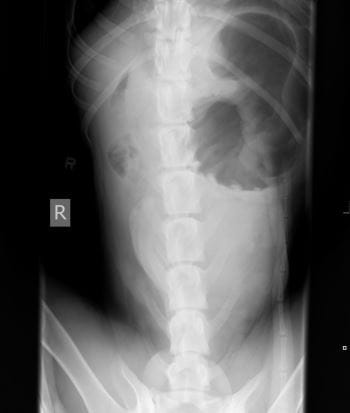 Gastric dilation and volvulus, dog, ventrodorsal view
Gastric dilation and volvulus (GDV) is an enlargement of the stomach associated with rotation on the mesenteric access. GDV is an acute, life-threatening condition that primarily affects large- and giant-breed dogs, with a mortality rate of 20%–45% in treated animals. Immediate medical and surgical intervention is required to optimize survival in patients with GDV.

Gastric dilation and volvulus (GDV) is an acute, life-threatening condition that primarily affects large- and giant-breed dogs. Immediate medical and surgical intervention is required to optimize chance of survival.

Recommendations for owners of dogs with high risk breeds include:

Prophylactic gastropexy should be considered in high-risk dogs.

It is unclear whether dilation or volvulus occurs first during the development of GDV, although it is postulated that volvulus occurs first. Dilation of the stomach results from accumulation of gas and/or fluid, and volvulus prevents the normal release of these contents. During volvulus, the pylorus and duodenum first migrate ventrally and cranially. Viewed from a caudal to cranial direction, the stomach may rotate from 90° to 360° in a clockwise fashion about the distal esophagus. This rotation displaces the pylorus to the left of midline, entrapping the duodenum between the distal esophagus and the stomach. Depending on the degree of volvulus, the spleen may vary in position from the left caudodorsal to the right craniodorsal abdomen. A volvulus of >180° causes occlusion of the distal esophagus.

After volvulus of the stomach, gas is trapped within this compartment and intragastric pressure rises. Gastric outflow obstruction may be caused by compression of the duodenum by the distending stomach against the body wall, or it may be due to the presence of neoplasia, a gastric foreign body, or pyloric stenosis. Splenic entrapment often accompanies GDV. The progressively distending stomach compromises venous return by compression of the caudal vena cava. Sequestration of blood in the dilated splanchnic, renal, and posterior muscular capillary beds results in portal hypotension, GI tract ischemia, hypovolemia, and systemic hypotension. These factors combine with the loss of fluid in the obstructed stomach and a lack of water intake to produce signs of hypovolemic shock. Dogs are at risk of endotoxemia, hypoxemia, metabolic acidosis, and disseminated intravascular coagulation.

Dogs with gastric dilation and volvulus may present with a history of nonproductive retching, hypersalivation, and restlessness. Acute or progressive abdominal distention may be noted, or the affected dog may be found recumbent and depressed with an enlarged abdomen.

Physical examination findings include an enlarged or tympanic abdomen. Abdominal pain and/or splenomegaly may be appreciated on abdominal palpation. Progression from gastric dilation to volvulus predisposes to hypovolemic shock. Signs of shock are common and can include weak peripheral pulses, tachycardia, prolonged capillary refill time, pale mucous membranes, and dyspnea. An irregular heart rate and pulse deficits indicate the presence of a cardiac arrhythmia. Additionally, the expanding stomach may compress the thoracic cavity and inhibit diaphragmatic movement, leading to respiratory distress.

Suspicion of gastric dilation and volvulus is usually high after considering the history, signalment, and clinical signs. Radiographs help distinguish simple gastric dilation from GDV. The preferred radiographic views for identification of GDV are right lateral and dorsoventral recumbency. Ventrodorsal positioning must be avoided because of the potential for aspiration of gastric contents.

The right lateral radiograph usually reveals a large, distended, gas-filled gastric shadow with the pylorus located dorsal and slightly cranial to the fundus. The gastric shadow is frequently compartmentalized or divided by a soft-tissue “shelf” between the pylorus and fundus. This shelf, or reverse "C” sign, is created by the folding of the pyloric antral wall onto the fundic wall. Splenic enlargement or malposition may be noted on radiographs. Gas within the gastric wall is suggestive of tissue compromise, whereas free gas within the abdomen indicates gastric rupture.

Prerenal azotemia is a common finding in animals with GDV and is secondary to systemic hypotension. Increased CK levels may be present due to striated muscle damage, and serum potassium levels may increase subsequent to cell membrane damage. Serum ALT and AST levels may increase secondary to hypoxic damage. Increased lactate is a common finding and is secondary to systemic hypotension and inflammation. Hyperlactatemia (>6 mmol/L) is associated with an increased likelihood of gastric necrosis and the need for partial gastric resection.

Immediate goals in treatment of GDV include restoring circulating blood volume and gastric decompression. Rapid surgical correction of the volvulus follows initial patient stabilization. Because duration of clinical signs is one of the risk factors of GDV-associated death, it is imperative to recognize and correct this condition immediately.

Correction of hypovolemia is the first treatment priority and is achieved by rapid fluid replacement with one or more large-bore (16- to 18-gauge) IV catheters placed in cranial (jugular, cephalic) veins. Shock rate (90 mL/kg/hr) fluid therapy with crystalloids should begin immediately. Fluid therapy with combinations of crystalloids, colloids (eg, hetastarch at a rate of 10–20 mL/kg, IV), or hypertonic saline (eg, 7% hypertonic saline solution with dextran 70 at a rate of 5 mL/kg over 15 min) can be considered for animals in severe shock, and the rate of crystalloid fluid infusion reduced by as much as 40% if these products are used. These fluid rates are guidelines only, and fluid resuscitation choices must be tailored to the individual patient’s needs.

Flow-by oxygen should be provided during stabilization. Electrolyte and acid-base disturbances are usually corrected by adequate fluid therapy and gastric decompression. Because of the potential risk of endotoxemia and GI translocation of bacteria, antibiotics (eg, ampicillin 22 mg/kg, three to four times daily, and continued for 2–3 days after surgery) are often given.

Gastric decompression occurs concurrently with fluid resuscitation. Initial decompression attempts should be made with an orogastric tube, which can be performed after sedation with fentanyl (2–5 mcg/kg, IV) or hydromorphone (0.05–0.1 mg/kg, IV), with or without diazepam (0.25–0.5 mg/kg, IV). Agents that cause vasodilation (eg, phenothiazines) should be avoided. A stomach tube is measured from the incisors to the last rib and marked. The tube must not be placed beyond this marking. The lubricated tube is introduced into the mouth (often held open with a roll of tape or bandage material) while the dog is in a sitting position. Some resistance is typically encountered at the esophageal-gastric sphincter. Gentle manipulation and counterclockwise movement of the tube may be necessary to allow passage of the tube into the stomach, but caution must be exercised because it is possible to perforate the esophagus with the tube. Once the tube enters the stomach, gastric gas rapidly escapes.

Successful passage of a stomach tube does not exclude the presence of volvulus. After gas and stomach contents are released from the stomach via the tube, the stomach should be lavaged with warm water to decrease the rate of redilation with gas.

If an orogastric tube cannot be readily passed, percutaneous gastrocentesis may be performed to release excess gastric gas. An area (10 cm × 10 cm) over the right abdominal wall caudal to the last rib and ventral to the transverse vertebral process is clipped and aseptically prepared. Percussion of the area should reveal tympany; this helps avoid accidental puncture of an overlying spleen. If a tympanic structure is not appreciated, the left paracostal region should be assessed. A large-bore needle or over-the-needle catheter is introduced through the skin and body wall into the stomach at the site of greatest tympany. Decompression usually allows for subsequent passage of an orogastric tube and lavage of the stomach.

Surgical correction of GDV rapidly follows the initial stabilization. Aseptic preparation of the abdomen is performed before surgery, and a cranioventral midline approach is performed. Before correcting the gastric torsion, the stomach should be decompressed with the help of an assistant placing an orogastric tube or via gastrocentesis intraoperatively. The stomach is then returned to its normal position, and the stomach and spleen are evaluated for ischemia. Any areas of ischemic gastric wall are removed, and a splenectomy is performed if necessary. Extensive gastric necrosis and necrosis of the gastric cardia are considered poor prognostic indicators. The stomach is emptied of contents, and a gastropexy is performed to decrease risk of recurrence. Several gastropexy techniques have been described and include a simple incisional pexy, a circumcostal (belt-loop) pexy, and a tube gastrotomy and pexy.

Postoperative medical management includes IV fluid therapy and analgesia. Food should be withheld for 48 hours after surgery. Antiemetic agents (metoclopramide at 0.2–0.5 mg/kg, SC, or 1–2 mg/kg/day, constant-rate IV infusion; maropitant at 1 mg/kg/day, SC) may be administered in cases of continued vomiting.

Postoperative cardiac arrhythmias are common, but treatment is often not indicated. Criteria to initiate antiarrhythmic therapy include signs of persistent tachycardia (>140 bpm), hypotension (systolic blood pressure <90 mmHg), hypoperfusion (prolonged capillary refill time, weak pulses), “R on T wave” pattern (a phenomenon that predisposes to ventricular fibrillation), or multifocal ventricular premature contractions. A bolus of 2% lidocaine (2–4 mg/kg, slowly IV) can be administered and repeated twice in a 30-minute period if necessary; a continuous IV infusion (30–80 mcg/kg/min) may be indicated to control arrhythmias. Cardiac arrhythmias associated with GDV are often difficult to control. If the arrhythmia is poorly responsive to this therapy, procainamide (6–10 mg/kg, IV over 15 min) should be given. Life-threatening arrhythmias may respond to 20% magnesium sulfate (0.15–0.3 mEq/kg, or 12.5–35 mg/kg, IV over 15–60 minutes).

Less common postoperative complications can include life-threatening conditions such as sepsis, peritonitis, and disseminated intravascular coagulation.

Overall mortality rate associated with GDV is ~25%–30%. Risk factors associated with short-term death from GDV include duration of clinical signs >6 hours before examination, performing splenectomy and a partial gastrectomy, hypotension at any time during hospitalization, peritonitis, sepsis, and disseminated intravascular coagulation. Preoperative plasma lactate concentration has been shown to be a good predictor of gastric necrosis and a negative prognostic indicator for outcome for dogs with GDV.

Owners of breeds at high risk of GDV should be educated about the risk factors for and signs of GDV, and advised to seek immediate veterinary care if clinical signs are apparent.