Miscellaneous Diseases of the Pinnain Dogs and Cats 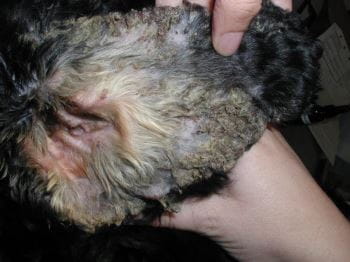 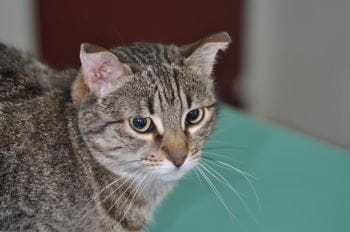 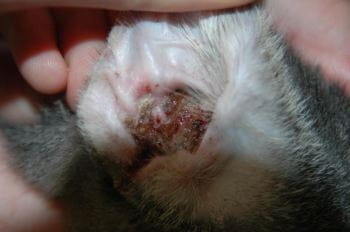 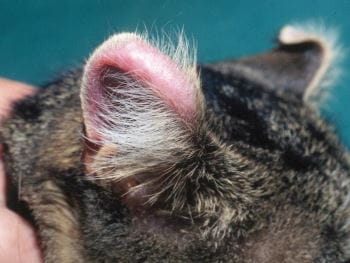 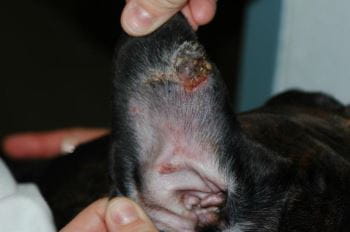 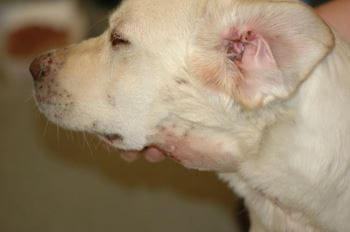 Several immune-mediated diseases may affect the pinna and the ear canal:

Other areas of the body are typically affected by pemphigus foliaceus and may include footpads, face (dorsal muzzle, periocular), nail beds in cats, mucous membranes and mucocutaneous junctions. PE can affect the face and the planum nasale, and cutaneous vasculitis can affect the tip of the tail and paw pads. The diagnosis of pemphigus foliaceus and other immune-mediated diseases are confirmed with biopsy of primary lesions (papules, vesicles, pustules) and histologic evaluation by a dermatohistopathologist.

Folded ear tips in cats are most often associated with longterm glucocorticoid therapy (eg, daily eye or otic preparations). They may also be caused by solar radiation damage. Ear folding may not be reversible.

Feline solar dermatitis, or actinic dermatitis, is seen most commonly in white cats or in cats with white pinnae that have been chronically exposed to sun. Lesions first appear as erythema and scaling on the sparsely haired tips of the ears. Crusting, exudation, and ulceration may develop as the actinic keratosis undergoes transformation into a squamous cell carcinoma. During early stages of the disease, treatment consists of limiting exposure to ultraviolet light through confinement indoors between the hours of 10 am and 4 pm and the use of topical sunscreens. Squamous cell carcinoma of the pinnae is treated with surgical excision followed by radiation therapy. If surgery and radiation therapy are not an option, topical treatment with imiquimod cream 2 to 3 times weekly has shown promising results.

Feline proliferative and necrotizing otitis externa is a rare disease of unknown cause. It can affect cats from 2 months to 12 years old, with most cases occurring before 4 years old. No breed predilection has been reported, but males appear to be overrepresented. It most commonly affects the concave aspect of the pinna and external aural orifice, but it can extend into the ear canal. The preauricular, periocular, and perioral regions may also be affected.

Lesions are characterized by thick hyperkeratotic crusts covering erythematous plaques that may erode or ulcerate. Secondary bacterial and yeast infections may aggravate the condition. Most cats appear indifferent to the lesions, but mild pruritus and discomfort may be present when ulceration develops.

Diagnosis is confirmed by the histopathologic findings, which are characterized by epidermal hyperplasia associated with scattered apoptotic-appearing keratinocytes that extend to the superficial follicular epithelium. Parakeratotic hyperkeratosis is also a feature. Spontaneous resolution has been reported to occur in some cases but only after 12–24 months.

Treatment with topical tacrolimus or oral cyclosporine at 5 mg/kg/day is reported to be efficacious.

Proliferative thrombovascular necrosis of the pinnae is rare in dogs. There are no known breed, sex, or age predilections, and the cause is unknown. Thrombo-ischaemic pinnal necrosis was associated with fenbendazole treatment in a dog. Lesions, which consist of scaly, thickened, hyperpigmented skin surrounding a necrotic ulcer, begin at the apex of the ear and spread along the concave surface. Eventually, necrosis may deform the margin of the pinna. Pentoxifylline (15–20 mg/kg, PO, every 8 to 12 hours) has been anecdotally reported to be efficacious in some cases. Topical glucocorticoids are also an option but must be used carefully because of their atrophogenic effects. If medical therapy has failed, surgical removal of diseased tissue should be considered.

Auricular chondritis has been reported rarely in cats and dogs. Clinical signs include pain, swelling, erythema, and deformation of the pinnae. Both ears are typically affected. Systemic signs may accompany some cases, and involvement of other organs such as the joints, eyes, and heart has been reported, similarly to relapsing polychondritis in humans. Histologically, lesions consist of lymphoplasmacytic infiltrates, basophilia, and loss or necrosis of cartilage. Treatment may not be required if the condition is nonpainful and no systemic signs are present. Oral prednisolone started at 3 mg/kg once a day was shown to be effective in one cat, prednisolone was slowly tapered and discounted without relapse within 18 month. Permanent deformity of the pinnae is to be expected whether or not treatment has been instituted.

Vasculitis is an uncommon disorder of dogs and cats. Lesions consist of purpura, erythema, well-demarcated ulcers, crusts, and sloughing of necrotic tissue. The pinnae, tail, and footpads are typically affected. It is usually difficult to determine the triggering cause, which may be immune-mediated, drug-induced, a concurrent infection, neoplasia, or idiopathic.

Frostbite may occur in animals poorly adapted to cold climates and is more likely in wet or windy conditions. It typically affects poorly insulated body regions, including the tips of the ears, feet, and tail. The skin may be pale or erythematous, edematous, and painful. In severe cases, necrosis and sloughing of the ear tips may follow. Treatment consists of rapid, gentle warming and supportive care. Amputation of affected regions may be required but should be delayed until the extent of viable tissue is determined, which may take some time.

Canine juvenile cellulitis is an uncommon disorder of puppies and is characterized by sterile papules, nodules, and pustules on the face and pinnae, in addition to submandibular lymphadenopathy. It is seen in puppies 3 weeks to 4 months old and rarely in older animals. A purulent otitis externa is common, along with edematous, thickened pinnae. Systemic signs such as anorexia, lethargy, and fever may be present.

Although any breed can be affected, the following breeds are at higher risk:

Diagnosis can be confirmed by biopsy, which shows a pyogranulomatous inflammatory infiltrate with no microorganisms, and by negative bacteriologic culture.

Treatment with immunosuppressive doses of prednisone or prednisolone (2 mg/kg, PO, divided twice a day) should be initiated as soon as the diagnosis is made to avoid scarring. The treatment should be tapered slowly throughout 4–6 weeks or until the disease is inactive. Antibiotics may be needed to treat secondary bacterial infection. Cyclosporine at 10 mg/kg/day has been reported to be effective in a case refractory to glucocorticoid therapy.

Canine sterile nodular granulomatous dermatitis of the pinna is a rare condition reported only anecdotally to date. Currently, existence of an age predilection is unknown, and Great Danes and Rottweilers appear to be overrepresented.

Clinical signs are characterized by multiple nodules that tend to coalesce and are primarily localized to the ear margin. Loose to adhered scales typically cover the nodules. Histopathology shows multiple dermal nodules composed primarily of histiocytes. Leishmaniasis Leishmaniosis read more is an important differential diagnosis in endemic areas. Other sterile nodular diseases that need to be excluded are sterile granuloma and pyogranuloma disease and cutaneous reactive histiocytosis; however, other body sites are commonly affected in these diseases.

Cases typically respond to oral glucocorticoids (eg, prednisone/prednisolone 1–2 mg/kg/day until remission and then tapered) or cyclosporine (5 mg/kg/day). Once the disease is in remission, a maintenance treatment regimen must be instituted.

Overview of Musculoskeletal Disorders and Diseases in Dogs

Overview of Diseases of the Spinal Column and Cord in Animals

Overview of Brucellosis in Dogs