Hypertrichosis Associated with Adenomas of the Pars Intermedia 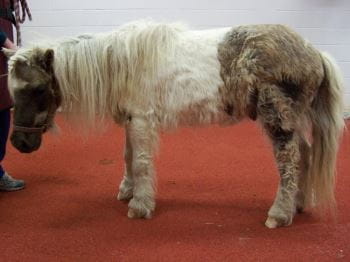 Hypertrichosis is the long, nonshedding hair coat that develops in older horses (typically ≥18 years old) and is associated with pituitary pars intermedia dysfunction (PPID) caused by an adenoma of the cells of the pars intermedia of the pituitary gland. The definition of hypertrichosis is growth of hair in excess of normal. This is in contrast to hirsutism, which is defined as increased hair growth that occurs secondary to increased blood levels of androgens. Therefore, hypertrichosis is the more correct term to describe the acquired increase in hair length and lack of shedding that occurs in horses with pituitary disease.

Horses of any breed can be born with a curly coat mutation, and Bashkir Curly breed horses have longer hair coats than those of most horses. However, the hair of those animals does not change as the animal ages. Pituitary adenomas may compress the overlying hypothalamus, which is the primary center for homeostatic regulation of body temperature, appetite, and cyclic shedding of hair. In addition, pars intermedia adenomas secrete increased amounts of alpha melanocyte-stimulating hormone (MSH), a factor in the growth of a long hair coat in winter.

Clinical Findings and Lesions of Hypertrichosis

Signs of PPID include:

If insulin resistance is also present, affected animals are at high risk for laminitis as well. Hypertrichosis often becomes evident because of failure of the cyclic seasonal shedding of hair. Before generalized hypertrichosis is observed, horses may have longer hair on the legs, ventral abdomen, and throat latch. Eventually, the hair over most of the trunk and extremities becomes long (up to 4–5 in. [10–12 cm]), abnormally thick, wavy, and often matted.

Pars intermedia adenomas are the most common pituitary tumors in horses. They are yellow to white, multinodular, and compress the pars nervosa. Horses with PPID may have hyperglycemia (insulin-resistant) and glycosuria. It is not known why some horses with PPID become insulin resistant and others do not. However, cortisol and other hormones that may be present in increased concentrations in horses with PPID are insulin antagonists.

Plasma immunoreactive adrenocorticotropin and alpha-MSH levels may range from modestly to extremely increased. Blood cortisol concentrations remain in the normal range but lack normal diurnal rhythm and escape suppression by administration of dexamethasone much more quickly than in healthy animals.

Hyperglycemia and insulin insensitivity are suggestive of pituitary adenoma in horses, but because they occur in horses with equine metabolic syndrome Equine Metabolic Syndrome read more or other insulin dysregulation syndromes, they are not diagnostic of PPID. Other nonspecific findings include an absolute or relative neutrophilia, eosinopenia, and lymphopenia; lipemia; hypercholesterolemia; and a mild, normochromic, normocytic anemia. Liver enzymes may be increased. Electrolytes are usually normal. Urinalysis is normal except for occasional glycosuria and a low to normal specific gravity.

Horses with PPID have an increase in plasma endogenous ACTH concentration 10 minutes after administration of 1 mg TRH, and the TRH stimulation test is believed to be the most sensitive means to detect a pituitary tumor. ACTH concentrations <110 pg/mL after TRH are normal, whereas those >200 pg/mL are considered positive. Values of 110–200 pg/mL are equivocal, and horses should be retested at a later time if results fall into that range.

Horses experience a seasonal rise in endogenous ACTH concentration in autumn (August through November in the northern hemisphere). Healthy horses are less likely to have a decreased cortisol concentration in response to dexamethasone administration and may demonstrate an exaggerated response to TRH in autumn as well. For this reason, only endogenous ACTH concentration should be examined between August and December and compared with season-specific normal values. Evocative testing is not recommended in autumn due to the high percentage of false-positive tests and should only be performed between January and July.

Differential diagnosis for hypertrichosis includes being of the Bashkir Curly breed or having a congenital curly coat abnormality. Some horses, particularly ponies, grow extremely long hair coats in the winter, which can be mistaken for hypertrichosis. They will shed out to normal hair coats in the spring, however. There is no other recognized condition in which adult horses acquire a long, curly hair coat besides PPID. For this reason, hypertrichosis can be considered a positive diagnostic test for PPID.

Horses with PPID are relatively fragile, with poor immune function; therefore, most require diligent attention to good husbandry. Pergolide, a dopaminergic agonist, is currently the only agent demonstrated to decrease endogenous ACTH concentrations in horses with PPID. Starting dosages are 0.006–0.01 mg/kg/day, PO. This typically results in a dose of 0.5–1 mg/day. If this amount does not result in improvement in clinical signs and endocrinologic testing, it may be increased gradually. Reported adverse effects of pergolide therapy include depression and anorexia. Often, these signs are transitory and resolve over time. If they do not, the dose may be decreased temporarily or split and given twice daily.

Although its use has not been documented to result in improvement in clinical signs when given alone, cyproheptadine at a dosage of 0.6–1.2 mg/kg/day, PO, may exert synergistic effects when combined with pergolide, and the combination may result in outcomes better than those achieved with pergolide alone. Trilostane, a competitive 3-β hydroxysteroid dehydrogenase inhibitor, has not been investigated adequately in horses, although its use has improved clinical results. Hypertrichosis can be managed by frequent body clipping. This can also decrease the increased sweating that can be present in horses with long hair coats.

Overview of Neoplasia of the Eye and Associated Structures

Overview of the Nervous System

Overview of the Adrenal Glands