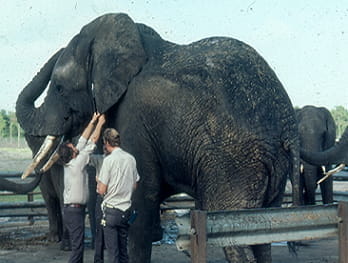 Encephalomyocarditis (EMC) is an important viral infection of feral rodents, swine, and captive zoo mammals. It is caused by members of the genus Cardiovirus in the family Picornaviridae and recognized in many parts of the world. The virus has been recovered from rats, mice, squirrels, voles, domestic and wild swine, raccoons, antelope, lions, elephants, birds, and various species of nonhuman primates. Infections in humans have also been reported.

The disease is named for its predilection for affecting the CNS and cardiovascular system in experimental studies in mice; and both encephalotropic and cardiotropic strains have been defined. However, in swine and zoo animals acute and subacute deaths are almost always attributed to the effects of the virus on the myocardium, which produces cardiac insufficiency and pulmonary edema resulting in frothy fluid in the respiratory tract. Strains of EMC viruses (EMCVs) that target the pancreas and are diabetogenic in mice studies have also been recognized; however, the importance of these finding for other mammals has not been established.

Cardioviruses are small, nonenveloped, single-stranded RNA viruses typically associated with rodents. Although EMCV isolates from various regions and countries have differed in pathogenicity and virulence, until recently all EMCVs were considered to exist as a single serotype (EMCV-1). A cardiovirus isolated from a wood mouse in Germany in 2012 was distinguished from EMCV-1 by means of serologic and molecular testing and has been designated EMCV-2. Although EMCV-1 infects a wide variety of hosts, the host range and pathogenicity of EMCV-2 remain to be determined.

EMC in nonrodent mammalian species has often been attributed to spillover from populations of wild mice and rats. These, and presumably other rodent species, shed the viruses in feces and urine, which may contaminate food and water supplies of larger mammals. Ingestion of rodents dead or dying of EMCV may be another means of infection. Pigs shed virus in nasal secretions and feces during the first 3 days of experimental infection. During this short period, the virus may be transmitted to other pigs by direct contact. Cardioviruses are resistant to adverse environmental conditions and may remain infectious for weeks to months.

Infected swine may die acutely at any age due to myocardial failure or may have abortions in late pregnancy, fetal mummification, and apparent reproductive failure. Mortality approaching 100% has been described in suckling swine; however, it becomes progressively lower in older animals. Type A strains cause porcine reproductive problems, whereas type B strains cause heart failure. With the recognition of porcine reproductive and respiratory syndrome Porcine Reproductive and Respiratory Syndrome Porcine reproductive and respiratory syndrome is a viral disease first reported in 1987 in the USA and now found throughout North and South America, Asia, Africa, and Europe. There are two distinct... read more (PRRS) in 1987, however, the overall importance of EMCV-1 as a cause of reproductive disease in swine has been questioned. The high mutation rate of the PRRS arterivirus complicates the maintenance of reliable diagnostic PCR assays for that virus, whereas a concurrent EMCV infection may be readily detected via virus isolation.

Most outbreaks of EMCV infection have been associated with captive animals in swine production units, primate research centers, and zoos. Sudden death is often the first indication of infection. Clinical signs may include fever, anorexia, listlessness, trembling, staggering, dyspnea, and paralysis. EMCVs are known to cross the placenta in swine and have been recovered from fetuses in cases of reproductive failure due to abortions in the later stages of pregnancy (107–111 days of gestation); stillbirths, and mummification may also occur. Reproductive problems have been reported to involve sows of all parities, often persisting in affected herds for 2–3 months.

A variety of exotic mammals have been fatally afflicted with EMC in zoologic parks in the US, Australia, and other parts of the world, anecdotally including African elephants, rhinoceroses, hippopotamuses, sloths, llamas, various antelope species, and many types of nonhuman primates (e.g., chimpanzees, orangutans, baboons, monkeys, lemurs). An episode of lion deaths at a zoo in the US was associated with feeding of an African elephant carcass that had died of EMC; and a spontaneous outbreak of fatal EMC was reported in free-ranging African elephants at Kruger National Park in South Africa in 1995. Reports of outbreaks of disease due to EMCV are solicited and recorded at the Pirbright Institute in the UK.

In typical cases of EMCV infection, on gross examination multiple circular to linear pale or hemorrhagic foci can be detected in the myocardium, particularly in the right ventricle. Some lesions may be necrotic, particularly in cases of acute death. However changes can be subtle and obscured by postmortem autolysis. Pulmonary edema with excessive pleural, pericardial, and peritoneal fluid is typical. During histologic examination, these lesions are evident as necrosis and lysis of the sarcoplasm with variable mineralization and lymphocytic infiltration. Microscopic lesions of the CNS include meningeal inflammation, perivascular cuffing of the cerebral cortices and hippocampi, and neuronal degeneration with gliosis.

Because the pale necrotic heart muscle lesions that may occur in fatal EMCV infections are also evident in septic infarction or vitamin E/selenium deficiency, a definitive diagnosis requires virus isolation. Heart, liver, kidney, and spleen tissue samples collected from acutely dead animals or aborted fetuses are the specimens of choice for virus isolation. This can often be readily accomplished by means of inoculation of specimens into monolayers of the baby hamster kidney (BHK) cell line. Because EMCVs are very stable, they may be recovered from frozen tissues. EMCV has been identified in porcine heart tissue with conventional, gel-based PCR assays.

Serologic diagnosis via virus neutralization, hemagglutination inhibition, or ELISA testing is possible if acute and convalescent sera are collected; however, the frequency of subclinical EMCV infections makes testing of single serum samples of little value in aborting sows. Detection of antibodies against EMCVs in stillborn or large, mummified fetuses is important for detection of fetal infection; however, because maternal immunoglobulins do not cross the placenta in swine.

Treatment, Control, and Prevention of Encephalomyocarditis Virus Infection in Animals

There is no specific treatment for EMCV infection; however, morbidity and mortality may be minimized by avoiding stress and excitement in animals at risk. EMCVs appear to cyclically infect rodents and are most likely to affect swine and zoo animals when rodent populations are high. Rodent control is thus critical to minimize exposure of susceptible species. Prompt and proper disposal of infected animals that have died is also recommended. EMCVs are inactivated by the judicious use of many disinfectants labeled for use on production animals. The virus is destroyed by heat treatment at 60°C for 30 minutes or by use of disinfectants containing chlorine, iodine, or mercuric chloride.

Killed vaccines for the prevention of myocarditis in weaned swine have been patented but are no longer commercially available in the US, except as autogenous products. The current impetus for vaccine development has come largely from zoos and amusement parks where EMCV infection has been problematic. Success with use of a genetically engineered attenuated virus vaccine has been reported in primates, pigs, and various zoo hoofstock species. Commercial EMCV vaccine production has been limited by the apparent lack of need in most domestic production-animal situations.

EMCVs have rarely been recognized as the cause of human illness, with the severe myocarditis and acute fatal infections observed in many animal species not typical for human infection. Nevertheless, serologic survey data indicate that EMCV infections in humans are common in many parts of the world; most are asymptomatic or not recognized. Symptoms and signs of EMCV infection in humans include fever, chills, nausea, headache, nuchal rigidity, delirium, delusions, vomiting, photophobia, and pleocytosis.