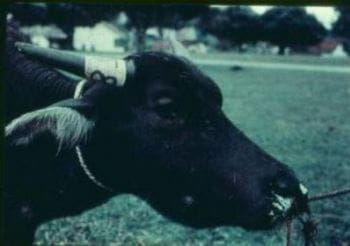 Hemorrhagic septicemia (HS) is an acute, highly fatal form of pasteurellosis that affects mainly water buffalo, cattle, and bison. It is a World Organization for Animal Health (OIE)–listed animal disease and is considered the most economically important bacterial disease of water buffalo and cattle in tropical areas of Asia, particularly in India and other parts of southeast Asia where water buffalo populations are high. Disease is most devastating to smallholder farmers where husbandry and preventive practices are poor and free-range management is common. HS is also an important disease in Africa and the Middle East, with sporadic outbreaks occurring in southern Europe. The only confirmed outbreaks of HS in the Americas occurred in bison in Yellowstone National Park, most recently from 1965–1967. Natural HS occurs infrequently in pigs, sheep, and goats and has been reported in camels, elephants, rhinoceros, horses, donkeys, yaks, and various species of deer and other wild ruminants.

Classical hemorrhagic septicemia as defined by the OIE is caused by Pasteurella multocida serotypes B:2 and E:2 (Carter and Heddleston classification system), which correspond to serotypes 6:B and 6:E of the Namioka-Carter classification system. Serotype B:2 has been identified in most areas where the disease is endemic, whereas serotype E:2 has been found only in Africa. Septicemic pasteurellosis that is clinically similar to HS is caused by a wide variety of other P multocida serotypes. Septicemic pasteurellosis has been reported most commonly in wild ruminants and occurs in geographic areas not affected by HS, such as the US, Europe, the UK, Australia, and Canada.

It has been estimated that up to 5% of healthy water buffalo and cattle are colonized by small numbers of P multocida serotype B:2 or E:2, which can be shed during periods of stress. Common stressors associated with outbreaks of hemorrhagic septicemia include high temperature and humidity, concurrent infection (blood parasites Blood Parasites read more or foot and mouth disease Foot-and-Mouth Disease in Animals Foot-and-mouth disease is one of the world's most economically important viral diseases of livestock. The virus infects cattle, pigs, and sheep and many cloven-hoofed wildlife species. The infection... read more

), poor nutrition, or work stress. Although outbreaks can occur at any time, disease is most prevalent during the rainy season. Increased outbreaks associated with high rainfall are most likely due to the multiple stressors present during this time and the moist conditions, which prolong the survival time of the organism in the environment.

Infection occurs by contact with infected oral or nasal secretions from either healthy carrier animals or animals with clinical disease, or by ingestion of contaminated feed or water. Infection begins in the tonsil and adjacent nasopharyngeal tissues. Subsequently, bacteremia leads to dissemination and rapid growth of bacteria in various locations, tissue injury, a host cytokine response, and release of lipopolysaccharides that results in a rapidly progressing endotoxemia. Clinical signs can appear 1–3 days after infection, and death can occur within 8–24 hours after the first clinical signs develop.

In endemic areas, HS affects older calves and young adults, and morbidity and mortality are variable. In nonendemic areas, epizootics can occur with high morbidity and mortality that can reach 100%. Water buffalo tend to have higher morbidity with more severe clinical disease than cattle. Recovery can stimulate acquired immunity to homologous and often heterologous strains of P multocida, and some of these animals become healthy carriers that can be a source of infection for future outbreaks.

In peracute cases of hemorrhagic septicemia that result in death within 8–24 hours, animals often have fever, hypersalivation, nasal discharge, and labored respiration; however, because of the short duration of disease, these clinical signs may easily be overlooked. Acute disease can persist for up to 3 days, and less often up to 5 days, and is characterized by fever of 104°–106°F (40°–41.1°C), apathy or restlessness and reluctance to move, hypersalivation, lacrimation, nasal discharge that begins as serous and progresses to mucopurulent. Subcutaneous swelling in the pharyngeal region that extends to the ventral neck and brisket (and sometimes the forelimbs), progressive respiratory distress, cyanosis, terminal recumbency, and sometimes abdominal pain with diarrhea are also seen.

The characteristic lesion of hemorrhagic septicemia is swelling of the subcutis and muscle of the submandibular region, neck, and brisket by clear to blood-tinged edema fluid. Serous to serofibrinous fluid may also be present in the thorax, pericardium, and abdominal cavity. There is typically widespread congestion with petechiae and ecchymoses in tissues and on serosal surfaces, particularly in the respiratory, GI, and urinary systems. Hemorrhages are often most prominent in the pharyngeal and cervical lymph nodes. Pulmonary congestion and edema, sometimes with interstitial pneumonia, and gastroenteritis may occur in some cases.

Clinical diagnosis of hemorrhagic septicemia in endemic areas is based on history, lapses in vaccination, environmental conditions, and the characteristic clinical signs and lesions of disease. Although typical outbreaks of HS are not difficult to recognize in endemic regions, acute salmonellosis Salmonellosisin Animals Salmonellosis is infection with Salmonella spp bacteria. It affects most animal species as well as humans and is a major public health concern. The clinical presentation can range from a healthy... read more

, and noninfectious toxicities should also be considered. Sporadic cases are more difficult to diagnose clinically and could be confused with blackleg Blackleg in Animals Blackleg is an acute, highly fatal disease of cattle and sheep caused by Clostridium chauvoei. In cattle, characteristic lesions of emphysematous swelling of the musculature often develop without... read more

, or snakebite Overview of Snakebite Venomous snakes of North America are members of either of two families: 1) the Elapidae or coral snakes (Micrurus spp); or 2) the Crotalidae, or pit vipers (rattlesnakes [Crotalus spp], cottonmouth... read more .

A definitive diagnosis of HS is based on isolation of P multocida serotype B:2 or E:2 (or other less common serotypes recognized by the OIE as causing HS) from the blood and tissues of a patient with typical clinical signs. Various other P multocida serotypes can cause HS-like disease in cattle and water buffalo, which must be differentiated from classical HS. The passive mouse protection test using specific B:2 and E:2 immune rabbit sera has been used in Asia and Africa to identify these serotypes. More precise tests, such as indirect hemagglutination, coagglutination, counter immunoelectrophoresis, and immunodiffusion tests have also been used in some laboratories. More recently, molecular techniques, including pulsed field gel electrophoresis, Southern blots, loop-mediated isothermal amplification, and PCR-based protocols, have been used to differentiate between capsular and somatic serotypes. The PCR array techniques are most feasible for use in endemic areas and can be used with various samples, including blood, tissues, or bacteria from broth or plate cultures.

Treatment and Prevention of Hemorrhagic Septicemia

Antimicrobials are effective against hemorrhagic septicemia if administered very early in the disease. However, because HS progresses rapidly, treatment is often unsuccessful. During outbreaks, any patient with a fever should be treated with intravenous antimicrobials as soon as possible to quickly obtain systemic bactericidal antimicrobial concentrations. Various sulfonamides, tetracyclines, penicillin, gentamicin, kanamycin, ceftiofur, enrofloxacin, tilmicosin, and chloramphenicol have been used effectively to treat HS. However, plasmid- and chromosomal-mediated multidrug resistance seems to be increasing for some strains of P multocida, and resistance to tetracyclines and penicillin has been reported for serotype B:2.

Killed vaccines are most commonly used for prevention and include bacterins, alum-precipitated and aluminum hydroxide gel vaccines, and oil-adjuvant vaccines. In patients >3 years old, an initial two doses, 1–3 months apart, are recommended, followed by booster vaccinations once or twice yearly. The oil-adjuvant vaccine provides protection for 9–12 months and is administered annually. It is most effective when administered 1 month before the monsoon or rainy season. Although it provides the strongest immunity, it is unpopular in the field because of its viscosity and difficulty of administration. Oil-based vaccines combined with polysorbate 80 or saponin have also been used in attempts to increase the ease of administration or immune protection.

The commonly used alum-precipitated and aluminum hydroxide gel vaccines have shorter durations of immunity (approximately 4–5 months with variable protective efficacy), and twice yearly booster vaccinations are recommended. It is important that the vaccines are made from the strains of P multocida circulating in the regions of intended use to obtain maximal effectiveness. Maternal immunity can interfere with vaccine efficacy in calves.

Attenuated or modified-live vaccines have been used with some success. A live, avirulent, intranasal vaccine prepared from a P multocida serotype B:3(4) of fallow deer origin seems generally effective; however, this vaccine has been associated with sporadic outbreaks and virulence in young animals. Various modified-live and subunit vaccines made from either purified or recombinant bacterial components have also been investigated experimentally but are not widely available.

Failure of vaccination to control HS is common due to inadequate vaccine coverage (<70%), mostly due to variable management systems that make annual vaccination difficult. In many cases, vaccination is practiced only in the face of an outbreak using a bacterin (broth or gel) vaccine for rapid coverage in the affected area, followed by ring vaccination using the oil-adjuvant vaccine. The OIE has recommended the establishment of disease-free zones (absence of disease for 3 years), so that vaccination can be focused on areas where infection is common. Use of intranasal live-attenuated vaccines has also been suggested as a means to increase vaccine coverage via self-vaccination of those animals in contact with vaccinated animals.

The P multocida serotypes that cause hemorrhagic septicemia have not been recovered from infections in humans. However, because many serotypes of P multocida have the potential to infect humans, appropriate precautions should be taken when dealing with suspected cases of HS or HS-like disease.