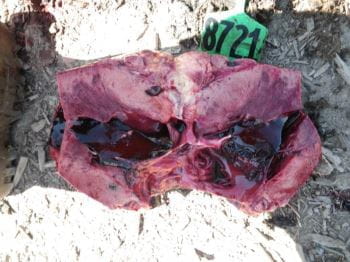 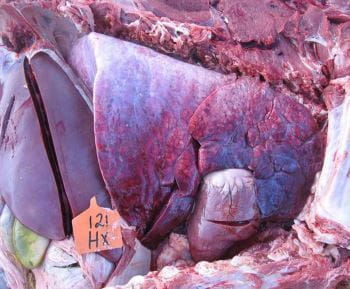 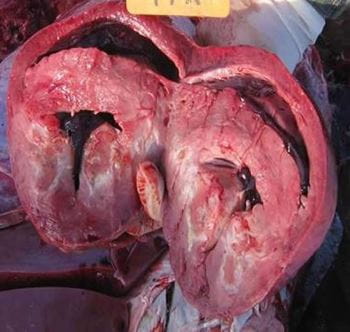 Myocardial necrotic sequestrum
Infection by Histophilus somni is common in North American cattle and sporadic in other locations worldwide. Sudden death, or a variety of clinical signs dependent on the system affected, may be observed. Diagnosis is based on histopathology, bacterial isolation, and PCR. Because identification of infected animals is difficult early in the course of the disease, antibiotic treatment may not be successful. Multivalent bacterins may help reduce morbidity and mortality.

Histophilosis, or Histophilus somni–associated disease, is a common disease in North American cattle. It also has been reported to occur sporadically in beef and dairy cattle worldwide. H somni predominantly causes an acute, often fatal, septicemia that can involve the respiratory, cardiovascular, musculoskeletal, or nervous systems, either singly or together in confined cattle. The reproductive system is often affected without clinical signs or other systemic involvement; however, herd infertility has been reported to occur more frequently and is probably uncommonly considered or pursued as a differential diagnosis.

H somni is a gram-negative, nonmotile, nonsporeforming, nonencapsulated, pleomorphic coccobacillus that requires an enriched medium and a microaerophilic atmosphere for culture. Hemolysis on blood agar occurs within 48 hours due to an exotoxin produced by most disease-causing isolates. Pathogenic and nonpathogenic strains have been differentiated. Ongoing research effort has demonstrated that the virulence of the organism may vary by region and age group. It may also vary by strain-specific capabilities to subvert bovine immunologic mechanisms.

H somni is considered a commensal of bovine mucous membranes. Pathogenic and nonpathogenic strains of H somni can be isolated from prepuce of males, the vagina of females, and in the nasal passages of both sexes. Genomic examination of such locations easily reveals the presence of H somni in the microbiome. Nasal and urogenital secretions are believed to be sources of the organism. The organism may colonize the respiratory tract, presumably after inhalation, and gain access to the bloodstream via that route. Colonization of the male and female reproductive tracts may involve venereal spread.

Recently weaned calves are at higher risk of infection and death from histophilosis than are previously weaned older calves, yearlings, or mature animals. The risk of infection and disease with H somni is highest early in the feeding period, with “high-risk” calves in confinement establishing peak titers to H somni at ~21–23 days after arrival, suggesting exposure likely occurs post-arrival at the feedlot from resident cattle. There is considerable evidence that high titers do not confer immunity in all cases. Although calves are generally exposed to H somni earlier in the feeding period, the average time on feed for calves that die of histophilosis has been reported to be 30–60 days. Sudden death due to peracute septicemia usually occurs within 21 days after arrival, although mortality due to other manifestations may occur throughout the feeding period. Reproductive disease manifestations, including granular vulvovaginitis, abortion, and mastitis, can affect individual beef and dairy cattle or more of the herd.

Initially, septicemia is likely required for most forms of histophilosis. Strains of H somni that cause disease adhere to the endothelium of vessels, resulting in contraction, exposure of collagen, platelet adhesion, and thrombus formation. The primary disease mechanism likely involves a thrombus, rather than a thromboembolism as once thought. Some bacterial strains may adhere to the endothelium in vessels of the pleura, myocardium, pericardium, synovium, or a variety of other tissues (eg, brain, larynx). This leads to interruption of the blood supply in those areas and results in the formation of an infarction, destruction of tissue, and the formation of a necrotic sequestrum. The development of clinical signs is associated with the extent of organ system involvement. The susceptibility of individual animals and variations in the preference of strains of the organism for vessels in different tissues may be important in the development of the different forms of the disease, but these have not been extensively studied.

The apparent preference of H somni for different organ systems has defined the changing character of histophilosis. Initially, the disease presented primarily as an encephalitic syndrome that changed to one in which pleuritic and myocardial forms have predominated. Anecdotal observations suggest that the organism may be changing again (eg, from a focal to a more generalized myocarditis). Recent microbiologic examinations of the organism have identified a variety of mechanisms that contribute to its diverse virulence and ability to withstand treatment.

Reproductive disease has not been associated with systemic infection; the inflammation appears to be more local, even though the pathogenesis in these situations is not well understood.

Sudden death is usually the first indication of H somni infection in a group of confined animals and is often mistaken by the stock attendants as evidence of a digestive tract upset such as bloat. Antibiotic treatment may change the progression of the disease, resulting in more chronicity. A profound depression has been described as the most noticeable clinical sign of encephalitic histophilosis. Other findings are determined by the system(s) involved and may include rapid respiration, stiffness, muscle weakness, ataxia, lameness, and severe behavioral changes.

Animals affected with pleuritic histophilosis are usually found dead without any treatment history; if alive, they may exhibit extreme dyspnea. Animals with myocarditis display very poor exercise tolerance and may collapse and die when movement to a handling facility is attempted. Animals with the encephalitic form and early depression rapidly proceed to recumbency, with occasional signs of hyperesthesia before death. Animals found dead and confirmed with H somni infection often have a history of treatment for undifferentiated fever or depression in the previous 14 days.

Closer individual examination usually reveals a febrile animal. Polypnea and/or dyspnea may be evident overtly and are easily confirmed by auscultation. Hypoxemia associated with a malfunctioning pulmonary or cardiovascular system can be easily confused with other clinical CNS signs such as ataxia, depression, or even blindness. A sterile blood sample obtained from an untreated animal at this time tests positive for H somni in a high percentage of cases. Because the disease is often peracute, animal welfare concerns can lead to euthanasia, so an extensive clinical work-up is rarely performed.

Feedlot cattle, or even calves on range, that die of possible histophilosis should be examined at necropsy. These animals may exhibit an array of postmortem findings, including:

Less common gross postmortem lesions include polyserositis, fibrinous gonitis, and a fibrinopurulent meningitis. Probably the most common lesion seen in feedyard cattle is that of an acute left heart failure, grossly visible as a distinctive discoloration of the myocardium that is often restricted to the papillary muscle.

In animals that survive long enough to allow the pathology to progress, the fibrinous portion of the lesions becomes fibrotic, and the infarctions become surrounded by scar tissue. Lesions in both the heart and larynx may liquefy and wall off to become an abscess. This process is often associated with a marked necrotic sequestrum in the papillary muscle. Another grossly visible pathologic process resulting in left-side heart failure is a proliferative endocarditis.

Lesions of the reproductive tract may include suppurative vaginitis, cervicitis, orchitis, and endometritis, but those findings are rarely documented because they may not be fatal. Necropsies are rarely requested for signs of infertility.

A definitive diagnosis of histophilosis is based on sampling and examination of affected tissues collected during a necropsy or clinical examination. A diagnosis at necropsy of left-side heart failure with a concomitant myocardial lesion or a carcass in which the thoracic space is filled with fluid and fibrin with little pneumonia is considered definitive for histophilosis.

Historically, isolation of the organism from CSF, brain, blood, urine, joint fluid, or other sterile, internal organs or fluids has been used to confirm the diagnosis. Because H somni is a commensal of the mucous membranes of cattle, the bacterium should be isolated in predominant or pure culture from the respiratory or urogenital tract to be considered a significant etiologic agent. This may be difficult, because antimicrobial treatment often interferes with recovery of the organism. The characteristic early histologic lesion is suppurative with heavy infiltrations of neutrophils in all tissues where localization of the bacteria occurs. Bacteria may be microscopically visible in the lesion. Currently, the diagnosis is usually confirmed with molecular techniques such as immunohistochemical staining of H&E-stained tissues or a fresh lesion swab subjected to a specific PCR test.

A major hindrance to successful treatment of individual histophilosis cases is the difficulty in identifying affected animals early in the course of disease because of its often rapidly fatal nature. Antimicrobial treatment is most effective in the early stages of disease. Florfenicol (20 mg/kg, IM, repeated in 48 hours, or 40 mg/kg, SC, once) may be the antimicrobial of choice if histophilosis is the tentative diagnosis in an individual animal.

Evidence supporting the use of prophylactic or metaphylactic treatment with a sustained-action antimicrobial or an oral antimicrobial supplement in the feed on arrival at the feedlot or in the face of occurring cases to reduce further histophilosis morbidity and mortality is scant. This sharply contrasts with the evidence that H somni is susceptible in vitro to a wide range of antimicrobials, including florfenicol, tilmicosin, tulathromycin, tetracyclines, trimethoprim-sulfadoxine, fluoroquinolones, and ceftiofur. Historically, the precise mechanism by which the organism is able to avoid systemic antimicrobial blood levels has not been well understood. It has been postulated that as H somni proliferates, it forms biofilms that allow it to adhere to the endothelium and to withstand an otherwise adequate level of an antimicrobial.

Bacterins containing different strains of the organism have been used to immunize cattle against H somni. Currently, many multivalent clostridial bacterins also are available with an H somni component, which may be an explanation for the anecdotal observation that the incidence of histophilosis in preweaned calves has declined. A favorable humoral response generated by a single immunization with a commercial vaccine has been shown to be improved when boosted with a second immunization. Calves initially immunized before “turn out” (estimated age to be 2 months) will respond to a second immunization anamnestically at preweaning processing or on their arrival at the feedlot after weaning.

Although protection with current bacterins and immunogens against histophilosis morbidity and mortality has been reported, the ability of immunization to consistently spare cattle from the disease is compromised when immunization and challenge occur at the same time (ie, arrival at the feedlot). Additionally, recent reports in the literature have suggested that the same process of biofilm production by the fulminating bacteria may also prevent any immunoglobulins from actually contacting the organism.

Meningitis, Encephalitis, and Encephalomyelitis in Animals