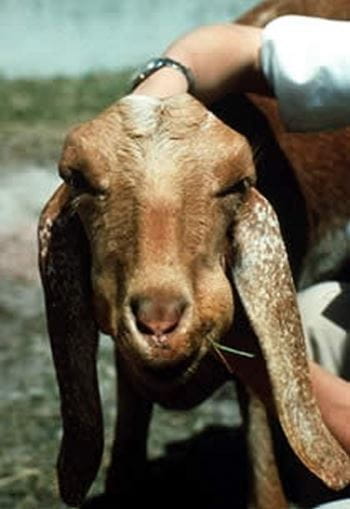 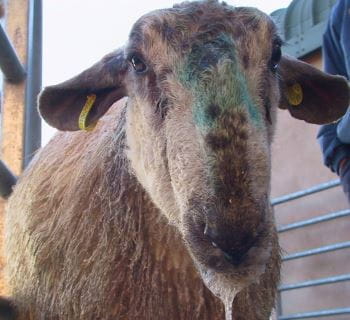 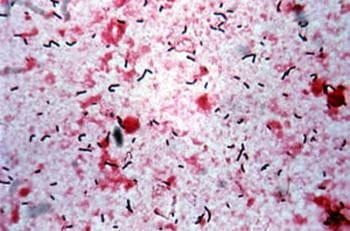 Listeria monocytogenes, photomicrograph of brain stem post-mortem...
The most common clinical manifestation of listeriosis is a localized ascending asymmetric infection of the brain stem of ruminants by Listeria monocytogenes. The resultant meningoencephalitis damages the origins of cranial nerves V, VII, and VIII in the brain stem, resulting in unilateral facial paresis or paralysis, head tilt, loss of sensation, depression, and recumbency. Diagnosis in ruminants is based on typical neurologic clinical signs. Treatment with high dosages of antimicrobials may be effective if given early in the course of infection.

Listeriosis is a sporadic bacterial infection that affects a wide range of animals, including humans and birds. Encephalitis or meningoencephalitis in adult ruminants is the most frequently recognized form. Listeriosis is seen worldwide, more frequently in temperate and colder climates. There is a high incidence of intestinal carriers.

Etiology and Epidemiology of Listeriosis in Animals

Listeria monocytogenes is a small, motile, gram-positive, nonspore-forming, extremely resistant, diphtheroid coccobacillus that grows in a wide temperature range 4°–44°C (39°–111°F). Its ability to grow at 4°C is an important diagnostic aid (the “cold enrichment” method) for isolation of the organism from brain tissue but not from placental or fetal tissues. Primary isolation is enhanced under microaerophilic conditions. It is a ubiquitous saprophyte that lives in a plant-soil environment and has been isolated from at least 42 species of domestic and wild mammals and 22 species of birds, as well as fish, crustaceans, insects, sewage, water, silage and other feedstuffs, milk, cheese, meconium, feces, and soil.

Pathogenesis of Listeriosis in Animals

Listeria organisms that are ingested or inhaled tend to cause septicemia, abortion, and latent infection. Those that gain entry to tissues have a predilection to localize in the intestinal wall, medulla oblongata, and placenta or to cause encephalitis via minute wounds in buccal mucosa.

The various manifestations of listeriosis occur in all susceptible species and are associated with characteristic clinical syndromes: encephalitis or meningoencephalitis in adult ruminants, abortion and perinatal mortality in all species, septicemia in neonatal ruminants and monogastric animals, and septicemia with myocardial or hepatic necrosis (or both) in poultry Listeriosis read more .

Septicemic or visceral listeriosis is most common in monogastric animals, including pigs, dogs, cats, domestic and wild rabbits, and many other small mammals. These animals may play a role in transmission of L monocytogenes. This form of disease is also found in young ruminants before the rumen is functional. Although rare, septicemia has been reported in older domestic ruminants and deer. The septicemic form affects organs other than the brain, the principal lesion being focal hepatic necrosis.

The uterus of all domestic animals, especially ruminants, is susceptible to infection with L monocytogenes at all stages of pregnancy, which can result in placentitis, fetal infection and death, abortion, stillbirths, neonatal deaths, metritis, and possibly viable carriers. The metritis has little or no effect on subsequent reproduction; however, Listeria may be shed for 1 month or longer via the vagina and milk.

Infections acquired via ingestion tend to localize in the intestinal wall and result in prolonged fecal excretion. It has been postulated that contaminated silage results in latent infections, often approaching 100% of the exposed herd or flock; however, clinical signs of listeriosis may be seen in only a few animals.

Clinical Findings of Listeriosis in Animals

Encephalitis is the most readily recognized form of listeriosis in ruminants. It affects all ages and both sexes, sometimes as an epidemic in feedlot cattle or sheep. The disease course in sheep and goats is rapid, and death may occur 24–48 hours after onset of clinical signs; however, the recovery rate can be up to 30% with prompt, aggressive treatment. In cattle, the disease course is less acute, and the recovery rate approaches 50%. Lesions are localized to the brain stem, and the clinical signs indicate dysfunction of nerve nuclei, including those of the third to seventh cranial nerves.

Initially, affected animals are anorectic, depressed, and disoriented. They may propel themselves into corners, lean against stationary objects, or circle toward the affected side. Facial paralysis with a drooping ear, deviated muzzle, flaccid lip, and lowered eyelid often develops on the affected side, as well as lack of a menace response and profuse, almost continuous, salivation; food material often becomes impacted in the cheek because of paralysis of the masticatory muscles. Terminally affected animals fall and, unable to rise, lie on the same side; involuntary running movements are common.

Listeric encephalitis may recur on the same premises in successive years. The number of animals clinically affected in an outbreak usually is <2%; however, in exceptional circumstances 10%–30% of sheep in a flock may be affected.

Listeric abortion usually occurs in the last trimester without prior clinical signs. Fetuses usually die in utero, but stillbirths and neonatal deaths also occur. The abortion rate varies and may reach 20% in sheep flocks. Fatal septicemia of the dam secondary to metritis is rare. Encephalitis and abortion usually do not occur simultaneously in the same herd or flock. However, the clinical pattern in affected sheep in the UK has been changing; abortions, encephalitis, and diarrhea are increasing, and outbreaks of abortions and encephalitis occur together in the same flock.

Listeriosis is relatively uncommon in pigs, with septicemia occurring in those <1 month old and encephalitis in older pigs; it has a rapid, fatal course of 3–4 days.

In listeric encephalitis, there are few gross lesions except for some congestion of meninges. Histopathologic lesions are confined primarily to the pons, medulla oblongata, and ventral spinal cord.

In septicemic listeriosis, small necrotic foci may be found in any organ, especially the liver. In calves that die at age <3 weeks, in addition to focal hepatic necrosis, there is frequently marked hemorrhagic gastroenteritis.

Gross findings in aborted fetuses typically include slight to marked autolysis, clear to blood-tinged fluid in serous cavities, and numerous small necrotic foci in the liver. Necrotic foci may be found in other viscera such as the lung and spleen. Shallow erosions, 1–3 mm in diameter, may be evident in abomasal mucosa; however, autolytic changes may mask these lesions. Gram-stained smears of abomasal contents reveal numerous gram-positive, pleomorphic coccobacilli.

Diagnosis of Listeriosis in Animals

Samples of lumbosacral CSF can be collected with the patient under local anesthesia. In cases of listeriosis, the CSF has an increased protein concentration (0.6–2 g/L [normal 0.3 g/L]) and a mild pleocytosis composed of large mononuclear cells.

Listeriosis is confirmed only by isolation and identification of L monocytogenes. Specimens of choice are brain tissue from animals with CNS involvement and aborted placenta and fetus. If primary isolation attempts fail, ground brain tissue should be held at 4°C (39°F) for several weeks and recultured weekly. Occasionally, L monocytogenes has been isolated from spinal fluid, nasal discharge, urine, feces, and milk of clinically ill ruminants. Serology analysis is not used routinely for diagnosis, because many healthy animals have high Listeria titers. Immunofluorescence assay testing is effective to rapidly identify L monocytogenes in smears of samples obtained from dead animals or aborted fetuses and from samples of milk, meat, and other sources.

Treatment and Control of Listeriosis in Animals

Recovery from listeriosis depends on early, aggressive antimicrobial treatment. The survival rate with treatment is lower in cattle exhibiting recumbency, excitement, and a weak or absent menace reflex. L monocytogenes is susceptible in vitro to penicillin (the drug of choice), ceftiofur, oxytetracycline, erythromycin, and trimethoprim/sulfonamide. High doses are required because of the difficulty in achieving minimum bactericidal concentrations in the brain.

Penicillin should be administered at a dosage of 22,000 U/kg wt every 12 hours for 1-2 weeks. The treatment should be initiated with potassium penicillin IV and followed with procaine penicillin G given IM. Intravenous oxytetracycline (16.5 mg/kg per day) is also effective and results in high plasma oxytetracycline concentrations that facilitate attaining effective antimicrobial concentrations in the brain stem. Supportive therapy, including fluids and electrolytes, is required for animals having difficulty eating and drinking. Administration of high-dose dexamethasone (1 mg/kg, IV) at first examination is considered beneficial by some veterinarians; however, it is controversial because it may depress cell-mediated immunity and will cause abortion during the last two trimesters in cattle and after day 135 in sheep.

Results with vaccines have been equivocal, which together with the sporadic nature of the disease, lead to questions about the cost versus benefit of vaccination. In an outbreak, affected animals should be segregated. If silage is being fed, use of the particular silage should be discontinued on a trial basis. Spoiled silage should be avoided. Corn ensiled before being too mature and grass silage containing additives are likely to have a more acidic pH, which discourages multiplication of L monocytogenes.

All material from suspected clinical cases of listeriosis carries the risk of zoonotic infection and should be handled with caution. Aborted fetuses and necropsy of septicemic animals present the greatest hazard. Humans have developed fatal meningitis, sepsis, and papular exanthema on the arms after handling aborted material. Pregnant animals and women should be protected from infection because of danger to the fetus, with possible abortion, stillbirth, and infection of neonates. Although listeriosis in humans is rare (upper estimate of 12 cases per million population per year), mortality can reach 50%. Most human cases involve older patients, pregnant women, or immunocompromised individuals. In ruminants with meningoencephalitis, L monocytogenes is usually confined to the brain and presents little risk of transmission, unless the brain is handled during necropsy.

L monocytogenes can be isolated from milk of mastitic, aborting, and apparently healthy cows. Excretion in milk is usually intermittent but may persist for many months. Infected milk is a hazard, because the organism may survive certain forms of pasteurization. Listeria also have been isolated from the milk, as well as cheeses, from sheep and goats.

Otitis Media and Interna in Animals