Cutaneous Manifestations of Multisystemic and Metabolic Defects in Animals 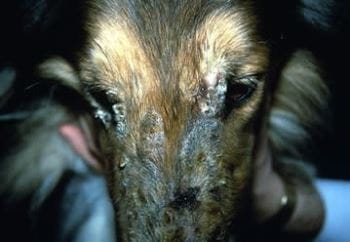 Baldy calf syndrome of female Holsteins, as the name implies, is associated with hypotrichosis. This autosomal recessive trait is lethal to male fetuses. Affected calves appear normal at birth but lose condition and patches of hair beginning 1–2 months later. The skin then becomes thickened and wrinkled, and the tips of the ears may curl. Calves salivate profusely and become emaciated, and affected female calves die by 6–8 months of age. The underlying metabolic defect is not known. A similar appearing syndrome, known as congenital anemia, dyskeratosis, and progressive alopecia, is described in polled Hereford calves of either sex. Anemia and small size are noted at birth and become progressively more severe. Alopecia, abnormal curly hair, and hyperkeratosis begin around the muzzle and ear margins and become more extensive as the calves mature. Later, the skin becomes markedly wrinkled, and neurologic abnormalities develop. Calves have diarrhea and die before 6 months of age.

Familial vasculopathy has been described in German Shepherds and Parson Russell Terriers. In these dogs, the skin lesions develop shortly after the first set of puppy vaccinations and seem to be exacerbated after subsequent vaccinations. The main cutaneous signs are footpad swelling and depigmentation that may progress to ulceration; all footpads are typically affected. Crusting and ulceration of the ear and tail tips and depigmentation of the planum nasale are also features. As the dogs mature, the disease may resolve, but pad lesions may be so severe that euthanasia is warranted. No known treatment is uniformly effective, although some dogs appear to respond to high dosages of corticosteroids. A severe form of neutrophilic vasculitis recently described in young Chinese Shar-Pei may be familial.

Familial dermatomyositis is an idiopathic inflammatory disease of the skin and muscles of young Collies and Shetland Sheepdogs. The mode of inheritance is reported to be autosomal dominant in Collies, but there is some evidence of a role for an unidentified infectious agent in the pathogenesis. A vasculopathy is associated with the early inflammatory stages of the disease in the skin and muscle; in both tissues, the eventual sequela is atrophy. The onset is typically at <6 months of age, although onset in adulthood has been recorded. Progression of lesions is variable, and individual pups within a litter may be affected mildly to severely. Skin lesions appear in areas of increased trauma and are seen on the face, ear tips, tail tips, and lateral surfaces of the extremities. Skin lesions, which consist of erosion, crusting, and alopecia, are exacerbated by heat and sun exposure. The muscles affected most severely are on the head and extremities.

Diagnosis is established by evaluation of littermates and family history, skin biopsy, electromyography, and muscle biopsy, which must be performed early in the course of the disease. There is no treatment, although there are anecdotal reports of benefit from corticosteroids, vitamin E, and omega-3 fatty acids. Severely affected dogs rarely respond satisfactorily to these treatments, however. Pentoxifylline (10 mg/kg, PO, twice daily) has been helpful in many dogs, anecdotally.

Hereditary lupoid dermatosis of German Shorthaired Pointers is first noted when the dog is ~6 months old. It begins with scaling and crusting on the head and dorsum and quickly progresses to generalized scaling with erythema. The dermatopathy appears to be either painful or pruritic. Affected dogs become febrile and develop lymphadenopathy. Some develop a poorly characterized enteropathy; most lose condition. As the name implies, skin biopsy specimens reveal features of a lupus-like dermatitis. The disease is progressive and ultimately fatal. No successful treatment has been reported.

Hereditary zinc deficiency syndromes are best known in cattle and have also been described in dogs. In cattle, these syndromes include hereditary parakeratosis, lethal trait A46, edema disease, and hereditary thymic hypoplasia. Affected breeds include Friesian, Shorthorn, Angus, and Black Pied. These syndromes all become apparent within days to weeks of birth and are characterized by symmetric, mostly acral, hyperkeratosis; crusting and unthriftiness; susceptibility to infection; and early death. Affected calves exhibit conjunctivitis, ptyalism, rhinitis, and diarrhea and often succumb to pneumonia.

In most breeds of cattle, the trait appears to be autosomal recessive and associated with intestinal malabsorption of dietary zinc, which is more or less responsive to dietary zinc supplementation. In some breeds, the defect in absorption is absolute, and parenteral administration of zinc is needed to achieve remission. Because such treatment is rarely feasible in production animals, these are lethal traits.

Diagnosis is established by excluding dermatophilosis Dermatophilosis read more and by skin biopsy (showing mostly parakeratosis), by measuring serum zinc levels, and by necropsy findings that include hypoplasia of thymus and lymph nodes.

In dogs, there are two familial zinc deficiency syndromes. In white Bull Terriers, lethal acrodermatitis is characterized by retarded growth; progressive, acral, hyperkeratotic dermatitis; and pustular dermatitis around mucocutaneous junctions. These signs are apparent by 10 weeks of age and are later accompanied by diarrhea, pneumonia, and death before 2 years of age. In older dogs, footpad hyperkeratosis and paronychia contribute significantly to morbidity. The severity of the cutaneous disease can be ameliorated somewhat by control of secondary bacterial and Malassezia infections and, with aggressive medical treatment, the lives of affected dogs can be prolonged. These dogs do not respond to oral zinc therapy.

A familial zinc-responsive dermatopathy that is manifest mostly by cutaneous lesions and is responsive to supplemental oral zinc is seen in Alaskan Malamutes, Huskies, and German Shorthaired Pointers. Signs develop at weaning or later in life and consist of crusting and hyperkeratosis of the extremities and mucocutaneous junctions. Often, bitches will develop signs associated with estrus or whelping and lactation. Secondary Malassezia infections are common. Diagnosis is established by skin biopsy and response to oral zinc supplementation.

Tyrosinemia has been described in a German Shepherd puppy. It was compared to a type of tyrosinemia in people and thus thought to be hereditary. Clinical manifestations included erosions and ulcerations of the footpads and nose and bullous lesions and depigmentation of the skin, loss of claws, and eye lesions. It must be differentiated from the familial vasculopathy of German Shepherds described above. In the puppy, serum tyrosine levels were 20–30 times above normal levels, and urine specimens contained similar high concentrations.

Porphyria is an inherited defect in the metabolism of hemoglobin and its byproducts. In cattle, accumulation of aberrant porphyrins in the skin increases sensitivity to ultraviolet light. (Porphyria has been described in cats and swine but does not result in photosensitivity.) In cattle, there are two types of inherited porphyries. Bovine protoporphyria has been reported in crossbred Limousin cattle and is inherited as an autosomal recessive trait. Clinical signs include photodermatitis and photophobia. Affected calves may die, but mature animals may be less severely affected.

Bovine erythropoietic porphyria Congenital Erythropoietic Porphyria read more is more common and more severe. It is reported in several breeds (including Shorthorn, Holstein-Friesian, and Hereford) as an autosomal recessive trait. In addition to severe photosensitivity, signs include red-brown discoloration of teeth, bones, and urine; regenerative anemia; and stunted growth. Teeth and urine from affected animals fluoresce orange under a Wood’s lamp. Skin biopsy is also useful in diagnosis.

Leukocyte adhesion deficiency in Holstein cattle is an inherited disease (autosomal recessive) with many manifestations. It is fatal before adulthood. Skin lesions are frequently seen in affected calves and include dermatitis and vasculitis. This disease can be diagnosed by molecular methods with PCR analysis of fresh or fixed tissue providing identification of affected, carrier, and normal cattle.

Also see pet health content regarding multisystem disorders that affect the skin in dogs Multisystem Disorders that Affect the Skin Dogs can be born with or may inherit any of several different kinds of skin abnormalities. Most of these conditions are uncommon to rare. Some occur with greater frequency in particular breeds... read more .

Overview of Disorders of Potassium Metabolism in Animals

Overview of Disorders of Magnesium Metabolism