Defects of Structural Integrity in Animals 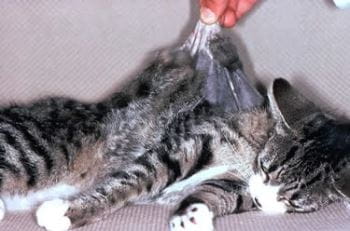 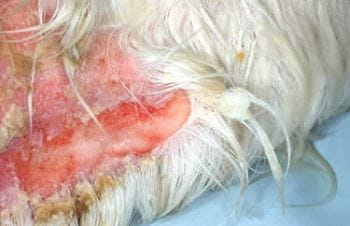 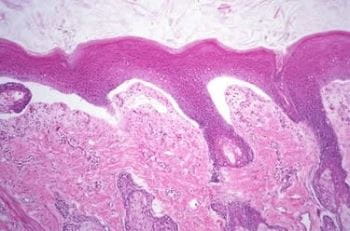 This category includes genetic defects in structural elements responsible for the integrity of the epidermis and dermal-epidermal junction, as well as some dermal structural anomalies.

Cutaneous asthenia (dermatosparaxis, Ehlers-Danlos syndrome) is a group of syndromes characterized by defects in collagen production. This results in a variety of clinical signs including loose, hyperextensible, fragile skin; joint laxity; and other connective tissue dysfunctions.

These collagen defects have been described in:

Clinical features include fragile skin from the time of birth, wounds that heal with thin scars, delayed wound healing, pendulous skin, and hematoma and hygroma formation. In lambs, rupture of the GI tract and arterial aneurysms are features, and the disease is fatal in lambs and calves. In horses, the onset is later and the lesions are well circumscribed, consisting of hyperextensible and somewhat fragile skin. In dogs and cats, the disease is not fatal, and older animals develop hanging folds of skin and exhibit extensive scarring; some have joint laxity or ocular anomalies.

Diagnosis is based on clinical signs and histopathologic studies of the collagen structure, which require age and breed-matched controls. For diagnosis in cats and dogs, a skin extensibility index has been developed. There are anecdotal reports of improvement of affected dogs with vitamin C supplementation. The major differential diagnosis in adult cats is feline hyperadrenocorticism with acquired skin fragility.

The epidermolysis bullosa syndromes are a group of congenital and hereditary diseases that result from defects in the dermal-epidermal attachment structures. These are known as mechanobullous diseases, because minor cutaneous trauma results in dermal-epidermal separation with formation of flaccid bullae that soon rupture, leaving glistening, flat erosions. Syndromes are classified according to the ultrastructural location of the epidermal-dermal defect: simplex, in the epidermal basal cell layer; junctional, within the basement membrane; and dystrophic, below the basement membrane in the subepidermal anchoring fibrils.

In large animals, lesions are most common on the gingivae, palate, lips, tongue, and feet. Some forms of epidermolysis bullosa are scarring, and most are fatal. In large animals, epidermolysis bullosa syndromes are known in calves (Simmental, Brangus), domestic buffalo, lambs (Suffolk, South Dorset Down, Scottish Blackface, Weisses Alpenschaf, Welsh Mountain), and Belgian foals.

Canine benign familial chronic pemphigus is a mechanobullous disorder that is caused by a defect in cell-to-cell adhesion in the epidermis. This disorder has been described in a family of English Setters. It develops within a few weeks of birth and causes crusting alopecic lesions on the pressure points of the skin that slowly enlarge as the puppies grow. The disease is benign, and no treatment is reported. Familial acantholysis, reported in New Zealand Angus calves, is a similar syndrome. This fatal syndrome is reported to be an autosomal recessive trait. Affected calves develop erosions, with collarettes and crusts, in areas subjected to trauma. Some show partial separation of the hooves. Diagnosis in both puppies and calves is established by skin biopsy of newly forming lesions.

Cutaneous mucinosis is thought to be a familial problem in some lines of Chinese Shar-Peis. Normal Shar-Peis have more cutaneous mucin than other dogs, but in some young dogs, cutaneous mucin formation in the dermis is so excessive that the skin exhibits pronounced folding and mucinous vesiculation. Diagnosis is by skin prick of the vesicles and observation of the strings of mucus that have the same appearance as normal joint fluid or, alternatively, by skin biopsy. The syndrome is partially responsive to corticosteroids, but they are contraindicated because of the young age of the affected dogs. As these dogs mature, the severity of the syndrome may abate, but it can be exaggerated by the development of allergic skin disease, which is common in the breed. The major differential diagnosis is hypothyroidism.

Other Disorders of the Bile Ducts in Small Animals

The Gonads and Tubular Genital Tract in Animals