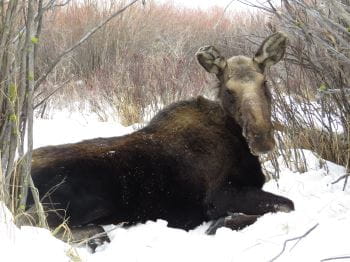 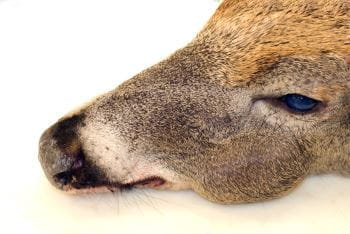 Elaeophora infection, jaw impaction, deer
Infection by Elaeophora schneideri, the arterial worm, is found in a variety of wild and domestic ruminants. Signs result from obstructed blood flow in the carotid and cephalic arterial systems. Diagnosis is by histopathology of necropsy specimens and PCR. There is no effective treatment, so restricting movement of susceptible wildlife from endemic areas may help limit spread of the disease.

Elaeophora schneideri, commonly referred to as the arterial worm, is a filarial nematode and the etiologic agent of elaeophorosis. Adult E schneideri are stout, white worms frequently found within the common carotid or maxillary artery. Adult females measure 60-120 mm long by 0.6-0.9 mm wide, and males are slightly smaller at 55-85 mm long by 0.4-0.7 mm wide. Microfilariae, which reside within the dermal capillary beds of the forehead and poll region, are 239-279 mcm long by 11-15 mcm wide, with a rounded anterior end and with a posterior end tapering to a blunt point.

Transmission of E schneideri occurs via the bite by an infected horse fly of the genera Tabanus andHybomitra. As the fly feeds, infectious larvae migrate to the leptomeningeal arteries, where the nematodes develop into immature adults in approximately 3 weeks. The immature adults migrate against blood flow to establish in larger arteries of the head and neck, where they reach sexual maturity approximately 6 months later, mate, and release microfilariae into the bloodstream. Adult E schneideri are relatively long lived, with an estimated lifespan of 3–4 years.

E schneideri infections have been reported in a variety of domestic, wild, and exotic game species. Mule deer and black-tailed deer are considered to be definitive hosts and may have minimal clinical disease. However, infection of atypical hosts, including domestic and wild sheep, moose, elk, sika deer, Sambar deer, and white-tailed deer, can result in the development of clinical elaeophorosis.

Elaeophorosis is characterized by obstructed blood flow, endothelial damage, thrombosis, and infarction due to the presence of nematodes in the carotid and cephalic arterial system. Parasite-mediated disruption of arterial circulation can lead to blindness, to ischemic necrosis of the brain, ears, muzzle, and other cephalic tissues, and to poor antler development, oral impactions, and sudden death. Elaeophorosis in sheep commonly manifests as a dermatitis of the head in reaction to microfilariae dwelling in the skin, often referred to as “sore head.”

Diagnosis of elaeophorosis is made during necropsy by the identification of parasites in animal tissues. E schneideri adults or larval forms are found within the carotid, internal maxillary, cerebral, and leptomeningeal arteries. Molecular identification of nematodes in tissues may be done by PCR to support the diagnosis of elaeophorosis. Additionally, histopathology may be used to observe arterial surface lesions produced by previous parasite infections. Recovery of microfilariae from skin lesion biopsies is used to confirm suspected elaeophorosis in sheep.

Due to the complex nature of the E schneideri life cycle and the potential for multiple ruminants to serve as competent hosts, the possibility of transporting E schneideri to new locations via cervid translocation, especially mule deer and black-tailed deer, must be considered. Movement of atypical hosts such as elk, white-tailed deer, moose, and sheep from enzootic areas to nonendemic locations could pose a risk for the introduction of elaeophorosis into naïve populations due to the ability of E schneideri to produce patent infections in these host species.

Overview of Pharyngitis in Animals

Overview of Lameness in Sheep

Overview of Lameness in Pigs