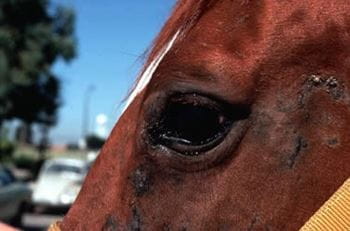 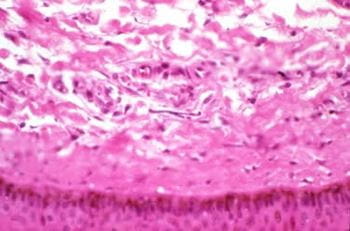 Onchocerca-associated dermatitis, histopathology, horse
Onchocerciasis is a dermatitis in equines and ruminants caused by microfilariae produced by adult Onchocerca. The parasites are transmitted by various biting flies, and prevention is by topical repellent. Diagnosis can be performed by histology or skin scraping to identify the microfilariae.

The taxonomic status of the three species of Onchocerca currently recognized in the USA, and other previously recognized species, is under debate. O cervicalis is found in the ligamentum nuchae and possibly other sites in Equidae. In cattle, O gutturosa locates in the ligamentum nuchae, and O lienalis in the gastrosplenic ligament. Adults are associated with connective tissues; they are very thin and 3–60 cm long. Microfilariae are found in the dermis and on rare occasions circulating in peripheral blood. The microfilariae lack a sheath and are 200–250 mcm long, with a short, sharply pointed tail. Culicoides spp Biting Midges Culicoides sensitivity in a horse. The biting midges, “no-see-ums,” or punkies belong to the family Ceratopogonidae. The most common biting midges are Culicoides spp. They are associated with... read more

are the intermediate hosts for O cervicalis, and Simulium spp for O gutturosa and O lienalis.

O cervicalis has been associated with fistulous withers, poll evil, dermatitis, and uveitis in horses. However, because O cervicalis in large numbers is common in horses without these diseases, there is some debate about its role in the pathogenesis of these conditions.

Adults in the ligamentum nuchae induce inflammatory reactions ranging from acute edematous necrosis to chronic granulomatous changes, resulting in marked fibrosis and mineralization. Mineralized nodules are more common in older horses. Although lesions are found in these areas, presumably associated with dead parasites, it is generally agreed that fistulous withers and poll evil are not caused by O cervicalis infections.

Microfilariae concentrate in the skin of the ventral midline. Large numbers can be found in horses without dermatitis as well as in horses with dermatitis of the face, neck, chest, withers, forelegs, and abdomen. These lesions may be pruritic and often include areas of scale, crusts, ulceration, alopecia, and depigmentation. The dermatitis may be associated with an immunologic reaction to dead and dying microfilariae. Although the pathogenesis of these lesions is unclear, treatment with microfilaricidal drugs may result in dramatic improvement. Allergic reactions to the bites of small flies may produce similar lesions or exacerbate microfilaria-associated dermatitis. Thus, diagnosis of Onchocerca-associated dermatitis may be based on responsiveness to microfilaricidal treatment.

Microfilariae also accumulate in the eyes of horses, but not all agree that a clear association has been made between microfilariae and equine uveitis Equine Recurrent Uveitis read more or other ocular lesions in horses.

The most effective method of diagnosis of onchocerciasis is by skin biopsy, preferably a full-thickness biopsy ≥6 mm. The tissue is minced and macerated in isotonic saline for several hours. Microfilariae are concentrated and stained with new methylene blue after removal of skin pieces. The microfilariae can be differentiated microscopically from Setaria spp, found in the blood of cattle, and Equidae by the presence of a sheath around Setaria.

No treatment is effective against adult Onchocerca. Ivermectin (200 mcg/kg) and moxidectin (400 mcg/kg) are efficacious (>99%) against microfilariae and produce marked clinical improvement in horses with onchocercal dermatitis. A small portion of horses infected with O cervicalis react to the treatment with a marked, edematous ventral midline swelling 1–3 days after treatment. Ocular lesions have also been reported. These reactions usually resolve spontaneously, but symptomatic treatment may be necessary.

Parasitic Worms of the Skin in Horses

Disorders of the Retina, Choroid, and Optic Disk (Ocular Fundus) in Horses