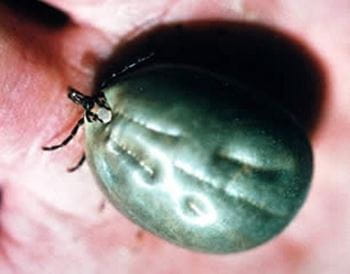 More than half of the approximately 135 known Amblyomma species are endemic to the New World. Amblyomma ticks are large, three-host parasites. They have eyes and long, robust mouthparts. They are more or less brightly ornamented and generally confined to the tropics and subtropics. Adults and immatures of 37 species in this genus parasitize reptiles. Reptiles and ground-feeding birds can also host immatures of Amblyomma spp adapted to parasitizing mammals in the adult stage. Their long mouthparts make Amblyomma ticks especially difficult to remove manually and frequently cause serious wounds that may become secondarily infected by bacteria or screwworms and other myiasis flies.

A americanum, the lone star tick, is abundant in the southern USA from Texas and Missouri to the Atlantic Coast and ranges northward into Maine. Southward, its distribution extends into northern Mexico. Because of the changing climate, the geographic range of this species continues to expand.

The scutum is distinctive because of pale ornamentation in males and a conspicuous, silvery spot (“star”) near the posterior margin in females. Larvae, nymphs, and adults are indiscriminate in host choice and parasitize a variety of livestock, pets, and wildlife as well as people. Activity in the USA continues from early spring to late fall. Feeding sites on domestic and wild mammals are usually skin areas with sparse hair; wounds at these sites predispose livestock to attack by the screwworm fly Cochliomyia hominivorax. The lone star tick may cause tick paralysis in people and dogs Overview of Tick Paralysis Tick paralysis (toxicity) is an acute, progressive, symmetrical, ascending motor paralysis caused by salivary neurotoxin(s) produced by certain species of ticks. With some species, other signs... read more .

A americanum is a vector of Francisella tularensis, the etiologic agent of tularemia; Ehrlichia chaffeensis, which causes monocytic ehrlichiosis in people; E ewingii, which causes granulocytic ehrlichiosis in dogs and people; and a Panola Mountain Ehrlichia closely related to the agent of heartwater, which is pathogenic to at least goats and people. This tick also transmits Rickettsia amblyommatis,(R amblyomii),R parkeri, R rickettsii; and carries endosymbiotic (presumably nonpathogenic) Borrelia lonestari and a Coxiella sp bacteria, both of which have been identified only by molecular methods but not isolated in culture. A americanum may cause tick paralysis in people and dogs. In addition, A americanum is the vector of several tickborne viruses including Bourbon virus (Togaviridae), Heartland virus (Phenuiviridae), and lone star virus (Bunyaviridae).

Amblyomma aureolatum is an important vector of R rickettsii – the agent of Rocky Mountain spotted fever (Brazilian spotted fever in Brazil) in the rainforest region of eastern South America. It is present from Uruguay to Suriname, including eastern and southern Brazil, French Guiana, eastern Argentina, and Paraguay. In natural settings, adults feed mainly on wild carnivores, while larvae and nymphs infest passerine birds and rodents. Domestic dogs are infested with adult A aureolatum in the forest and bring ticks home with them.

Six closely related tick species belonging to theA cajennense complex, the Cayenne ticks range from southern Texas (USA) to South America. Amixtum is found from the USA to Ecuador. A cajennense is distributed throughout the Amazon region of South America from Venezuela to Brazil. A patinoi andA interandinum occur in Cordillera of Colombia and Inter-Andean valley of Peru, respectively.A sculptum is present in the humid environs of southern Brazil, Bolivia, Paraguay, and northern Argentina, and A tonelliae occupies dry areas of the Chaco region spanning central-northern Argentina to Bolivia and Paraguay.

Ticks of this species complex are indiscriminate in host choice: livestock and a large variety of avian and mammalian wildlife serve as hosts. Dense infestations on cattle and horses lead to anemia, weight loss, and production losses. People are severely irritated by clusters of larvae (“seed ticks”) in wooded and high-grass areas. Most adults attach on the lower body surface, especially between the legs; some feed elsewhere on the body. In general, activity of different life stages continues throughout the year. However, because A cajennense complex has been only recently divided into six individual species, vertebrate host preferences, natural life cycles, and seasonal dynamics for each of the newly delimited species are yet to be described.

Ticks of the A cajennense complex have been variably described as vectors of Rickettsia parkeri and Rickettsia rickettsii as well as experimentally shown to transmit Ehrlichia ruminantium. Wad Medani virus (an Orbivirus, Reoviridae), an African virus transported to Caribbean islands by A variegatum-infested cattle from Senegal, has been isolated from A mixtum in Jamaica.

A maculatum, the Gulf Coast tick, is an important pest of livestock, particularly cattle, from South America to the southern USA. Optimal habitats are warm areas with high rainfall, near seacoasts. However, in the USA, this tick has expanded from the Gulf Coast to Midwestern states and along the Atlantic seaboard from Florida to Virginia. The northward expansion is believed to be due to dispersal of immature ticks carried by migratory birds as well as climate change, which allows tick survival at higher latitudes. Immatures usually parasitize birds and small mammals; adults parasitize deer, cattle, horses, sheep, pigs, and dogs. Adult feeding activity is chiefly in late summer and early fall but may begin later after a dry summer. Most adults infest the ears, where the feeding wounds are initial sites of screwworm infestations. Clustered feeding adults also cause much irritation to the upper parts of the neck of cattle and to the humps of Brahman cattle. A maculatum is the primary vector of R parkeri, and in some tick populations as many as 50% of individual ticks may be infected with this pathogen. It is also the principal vector of the canine pathogen Hepatozoon americanum.

A imitator parasitizes livestock from Central America to southern Texas; it has been shown to transmit R rickettsii in Mexico. Occasional pests of livestock in tropical America are A neumanni (Argentina), A ovale and A parvum (Argentina to Mexico), A tigrinum (much of South America), and A tapirellum (Colombia to Mexico).

A ovale is a frequent and abundant parasite of roaming (unrestrained) dogs in rural areas from central Mexico to northeastern Argentina, however, occasional findings have been reported as far north as Iowa, in the USA. Under natural conditions, A ovale adults parasitize wild carnivores, whereas rodents are preferred hosts for larval and nymphal stages. A ovale is an important vector of R parkeri (Atlantic rainforest Rickettsia) in Brazil.

A testudinarium inhabits Asian tropical wooded environments from Sri Lanka and India to Malaysia and Vietnam, Indonesia, Borneo, Philippines, Taiwan, and southern Japan. Adults are particularly abundant on wild and domestic pigs and also infest deer, cattle, other livestock, and people. Immatures parasitize birds and small mammals as well as people. In India and Sri Lanka, adult A integrum and A mudlairi also parasitize livestock, wild ungulates, and people.

A variegatum, the tropical African bont tick, is an easily visible, brightly colored parasite found throughout sub-Saharan savannas southward to the range of A hebraeum, and also in southern Arabia and several islands in the Indian and Atlantic Oceans and the Caribbean. An eradication program is in progress in the Caribbean; St. Kitts, St. Lucia, Montserrat, Anguilla, Barbados, and Dominica qualified for "provisionally free" certification by 2002, although St. Kitts was reinfested in 2004. Host preferences are similar to those of A hebraeum but also include camels. The bites of the tropical bont tick are severe. They may result in septic wounds and abscesses, inflammation of the teats of cows, and considerable damage to hides and skins. Adults feed chiefly during rainy seasons, immatures during dry seasons. Most adults attach to the underside of the host body, on the genitalia, and under the tail.

A variegatum injuries to hosts and transmission of E ruminantium are similar to those of A hebraeum but also include the spread of acute bovine dermatophilosis Dermatophilosis read more . This tick is not considered to be an effective vector of Nairobi sheep disease virus but is a secondary vector of Crimean-Congo hemorrhagic fever virus. Dugbe virus has been isolated from A variegatum in six countries north of the equator; the Thogoto and Bhanja viruses are also associated with this tick in various areas north of the equator. Notably, yellow fever virus has been isolated from A variegatum collected from cattle in the Central African Republic and has been demonstrated to be transovarially transmitted to the progeny of infected females. Jos virus infects A variegatum from Ethiopia to Senegal and has been transported in this tick to Jamaica.

A lepidum, the East African bont tick, inhabits xeric savanna environments from northern Tanzania to central Sudan. A gemma, the gem-like bont tick, occurs in similar environments of Tanzania, Somalia, Kenya, and Ethiopia. A small variety of the buffalo bont tick, A cohaerens, is abundant on cattle in Ethiopian highlands, but from Zaire to Tanzania the larger variety of A cohaerens parasitizes chiefly Cape buffalo. Other African Amblyomma ticks of Cape buffalo and various other large mammals, including livestock, are A pomposum of humid highland forests in Angola, Zaire, Uganda, southern Sudan, Kenya, and Zimbabwe, and A astrion of West Africa and Zaire. These five tick species are vectors of Ehrlichia ruminantium (heartwater) and Theileria mutans (benign African theileriosis).

In Central and South America, numerous Amblyomma spp parasitize livestock and dogs, often in large numbers. Among those, Amblyomma and A ovale adults feed primarily on carnivores and A parvum on carnivores and armadillos. A auricularium has been found on wild hosts of the families Myrmecophagidae and occasionally Didelphidae, Caviidae, Chinchillidae, Hydrochaeridae, Muridae, Canidae, Mustelidae, and Procyonidae; it transmits R rickettsii in Brazil. A pseudoconcolor has been found occasionally on wild hosts of the family Didelphidae. A naponense is common on peccaries, and A oblongoguttatum has been found on a variety of hosts in several South and Central American countries. Capybaras are the main host for all stages of A dubitatum, although its geographical range is smaller than that of the principal host. The South American tapir (Tapirus terrestris) seems to be the primary host for the adult stage of A latepunctatum, A scalpturatum, and A incisum. A dissimile is a common parasite of reptiles and true toads of the genus Bufo, from Argentina northward to southern Mexico, the Caribbean islands, and southern Florida.