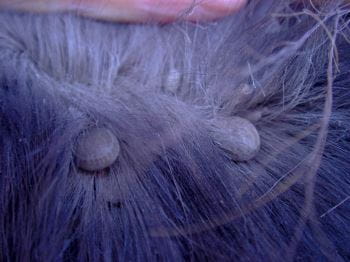 Of the 35 currently recognized Dermacentor spp, 19 inhabit temperate zones and 13 are found exclusively in the palearctic region. Among the tropical species, D nitens is of major veterinary importance, although others may transmit zoonotic infections, and adults may be common on wildlife such as pigs, deer, and antelope. Immatures infest chiefly rodents and lagomorphs. Dermacentor spp in cold areas and D nitens in tropical America have specialized life cycles and seasonal dynamics of activity, each of which must be considered separately. Except for D nitens, D albipictus, and D dissimilis, the Dermacentor life cycle is of the typical three-host pattern.

D nitens, the one-host tropical horse tick, is of considerable veterinary importance. It originally parasitized deer (Mazama) in the forests of northern South America. With the introduction of Equidae and other livestock into its habitat, it adapted to these animals. Spending its entire parasitic life deep in the hosts’ ears, this parasite was easily spread by human activities to other areas of the Americas, including Florida and Texas. In addition to ear cavities, each active stage may infest nasal passages and the mane, ventral abdomen, and perianal area. D nitens transmits Babesia caballi transovarially to successive generations and is important in the horse-racing industry. It also is an experimental vector of Anaplasma marginale to cattle.

Another American one-host species, D albipictus, the winter or moose tick, ranges from Canada and northern USA into western USA and Mexico. A brownish form, sometimes called D nigrolineatus, is distributed from New Mexico to southern and eastern USA and may merit subspecies, if not full-species, rank. The larval-nymphal-adult feeding period on a single host (moose, deer, elk, or domestic cattle or horses) extends from fall to spring. Heavy infestation with D albipictus causes the often fatal "phantom moose disease” when an animal is so irritated by ticks that it rubs off most of its hair, exposing bare skin. D albipictus is a secondary vector of Colorado tick fever virus, and is an experimental vector of B caballi; it is a natural vector of A marginale in Oklahoma.

In Mexico and central America, D dissimilis parasitizes a variety of equine and ruminant hosts and may be a one-host tick on horses.

The Rocky Mountain wood tick, D andersoni, is found from Nebraska westward to the western mountains (Cascades and Sierra Nevadas), to western Canada, and southward to northern New Mexico and Arizona.

The American dog tick, D variabilis, is found west of the Cascades and Sierra Nevada, along the Gulf Coast in Mexico, from Montana to Texas and east to the Atlantic in the USA, and in southeastern Canada. There is also an isolated population of D variabilis along the west coast of the USA, concentrated in California.

Both D andersoni and D variabilis ticks usually prefer brushy field habitat. Adults of both species parasitize livestock and wildlife, including deer, bison, and elk, but adult D variabilis prefer skunk, raccoon, puma, etc, and domestic dogs. Immatures feed on rodents and other small wild mammals. Both species may cause tick paralysis in livestock, wildlife, and people. D andersoni and D variabilis are the primary vectors of Rickettsia rickettsii, the agent of Rocky Mountain spotted fever Rocky Mountain Spotted Fever in Dogs Spotted fevers are diseases caused by a set of related bacteria in the Rickettsia genus, of which Rocky Mountain spotted fever is the most severe. After transmission of the pathogen through... read more . D andersoni is also the chief vector of Colorado tick fever virus and transmits Powassan virus, A marginale, A ovis, and the agents of tularemia Tularemiain Animals Tularemia is a bacterial septicemia that infects >250 species of wild and domestic mammals, birds, reptiles, fish, and people. It is listed as a category A bioterrorism agent because of the... read more

and coxiellosis Overview of Coxiellosis Coxiellosis is a zoonotic bacterial infection associated primarily with parturient ruminants, although domestic animals such as cats and a variety of wild animals have been identified as sources... read more /Q fever. D variabilis is an experimental vector of A marginale, B caballi, and B equi. In addition, sawgrass virus, Ehrlichia chaffeensis, and E ewingii have been occasionally detected in questing D variabilis adults.

A related, biologically similar species, D occidentalis, is restricted to the Pacific lowlands and foothills from Oregon to Baja California and is a natural vector of A marginale.

In western USA and Mexico, D parumapterus, D hunteri, and D halli parasitize various hares and rabbits, mountain sheep, and peccaries, respectively. These ticks seldom make contact with livestock. D hunteri is an experimental vector of A marginale and A ovis. D parumapertus is a vector of a unique strain of Rickettsia parkeri in the western United States. In Costa Rica and Panama, D latus infests tapirs.

In Eurasian steppes, forests, and mountains, D marginatus, D reticulatus, and D silvarum, collectively, are vectors of Rickettsia slovaca and R raoultii (the causative agents of tickborne lymphadenopathy), R sibirica (the agent of Siberian tick typhus), Babesia bovis, B caballi, B equi, B canis, Theileria ovis, and A ovis, together with the agents of tularemia and coxiellosis/Q fever, and Russian spring-summer encephalitis. Brucella melitensis and B abortus have been identified in progeny of D marginatus females collected from sheep and cattle, respectively, demonstrating the tick's ability for transovarial transmission of those pathogens.

D marginatus is found in forests, marshes, semideserts, and alpine zones from France to southwestern Siberia, Kazakhstan, Xinjiang Uygur Autonomous Region of China, Iran, and northern Afghanistan. D reticulatus ranges from Ireland and Britain to northwestern Siberia and Xinjiang, China, in meadows, floodplains, and deciduous and deciduous-conifer forests. D silvarum ranges from central Siberia and northeastern China to Japan in marshes, meadows, shrubby and secondary forests, and farmlands in taiga forest areas. Some males in populations of each of these three species remain attached to the host during winter. Adults and immatures may overwinter on the ground. Greatest adult activity is from early spring to summer with a lower peak in fall. Larvae and nymphs are active from spring through fall. The life cycle may be completed in 1 year or extended by one or more summer or winter diapauses to 2–4 years.

Approximately 12 other Dermacentor spp inhabit certain lowland, mountain steppe, and semidesert areas of temperate Asia. Their adults are commonly taken from camels, cattle, horses, sheep, and goats. In tropical Asia, the several species of the Dermacentor subgenus Indocentor are parasites of wild pigs; they also infest larger wildlife but seldom if ever feed on livestock.