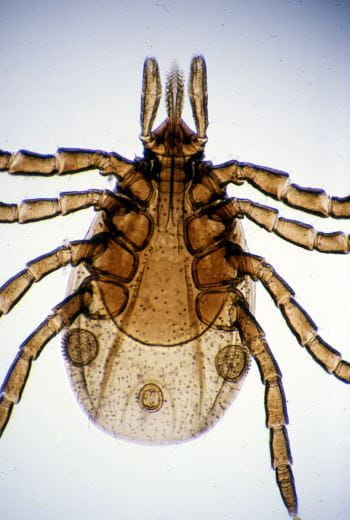 Ixodes spp, the largest genus of the family Ixodidae, contains approximately 245 species and is highly specialized both structurally and biologically. So far as is known, all Ixodes spp have a three-host life cycle. Almost all inhabit temperate or tropical forest zones or wooded or shrubby grasslands; fewer are adapted to humid areas in semideserts or to arctic or sub-Antarctic nesting colonies of marine birds. Hosts are a wide variety of birds and mammals and a few reptiles. Most Ixodes species parasitize burrowing hosts or those that return regularly to caves, dens, or terrestrial or arboreal nesting colonies. The few Ixodes spp that parasitize wandering artiodactyls or perissodactyls are exceptionally adaptable; they also parasitize livestock and are important pests or vectors of agents that infect livestock and people.

The I ricinus group of Eurasia, northwestern Africa, and North and South America is especially important as primary vectors of the agents of Lyme disease, anaplasmosis, babesiosis, and viral encephalitis throughout the northern hemisphere. I ricinus, the so-called sheep tick and prototype of this group, inhabits relatively humid, cool, shrubby and wooded pastures, gardens, windbreaks, floodplains, and forest through much of Europe to the Caspian Sea and northern Iran. Its life cycle is 2–4 years, depending on environmental temperature.

I ricinus larvae feed on small reptiles, birds, and mammals. Nymphs feed on small and medium-sized vertebrates, and adults feed chiefly on herbivores and livestock. All stages, especially nymphs and adults, parasitize people. Male I ricinus take little or no food and can mate either on or off the host. Unfed adults often mate while on vegetation. Adult activity peaks in spring; in some populations, there is a lower peak of adult activity in the fall. Among arboviral diseases transmitted by I ricinus are louping ill Louping Ill in Animals Louping ill, caused by louping ill virus and transmitted by ticks, causes a frequently fatal encephalitis that results in highly variable neurologic signs and has no specific treatment or available... read more , tickborne encephalitis, and Crimean-Congo hemorrhagic fever Crimean-Congo Hemorrhagic Feverin Animals Crimean-Congo hemorrhagic fever (CCHF) is a severe hemorrhagic disease affecting humans caused by the zoonotic CCHF virus. Many animal species and some birds can be infected without signs of... read more . Other agents transmitted to livestock are Coxiella burnetii, Anaplasma marginale, Babesia divergens, andA phagocytophilum , various strains of which cause bovine, ovine, and human granulocytic anaplasmoses.

In drier, warmer, eastern Mediterranean biotopes, I ricinus is replaced by I gibbosus, which completes its life cycle in 1 year. The recently describedI inopinatus has been found in Spain, Portugal, Morocco, Tunisia, Rumania, and Germany. It may have been historically confused with and erroneously reported as I ricinus in parts of Spain, Portugal, and northern Africa. In south Germany, Iinopinatus and I ricinus can occur sympatrically and even on the same hosts (sheep and foxes). There are no data regarding the life cycle of I inopinatus, its seasonal activity, the range of vertebrate hosts affected, and the potential role as a vector of pathogens.

I persulcatus, the taiga tick, is closely related to I ricinus and has similar host preferences. It ranges from the central and eastern mountains of Europe through the lowland forests from the Baltic Sea and Karelia eastward through the Siberian taiga to the Seas of Japan and Okhotsk and the northern islands of Japan. The life cycle can be completed in 3–4 years but can last up to 7 years in regions with a short summer season. It is one of the main vectors of Russian spring-summer encephalitis virus and Borrelia burgdorferi. In addition, it transmits Babesia spp, Ehrlichia muris, and the agents of human and ovine anaplasmoses and tularemia.

Other Asian representatives of the I ricinus group are I sinensis of China; I kashmiricus of mountainous northern India, Pakistan, and Kyrgyzstan; I pavlovskyi of the southern Siberian mountains of Russia; and I kazakstani of mountain taiga and deciduous forest in Kazakhstan, Kyrgyzstan, and Turkmenistan.

In the Americas, representatives of the I ricinus group include I scapularis, I pacificus, I affinus, I jellisoni, I minor, and I muris. The blacklegged tick, I scapularis, is distributed throughout the eastern and northcentral USA and southern Canada. It is a vector of Borrelia burgdorferi, the agent of Lyme disease Lyme Borreliosis in Animals Lyme borreliosis is a vector-borne zoonotic disease transmitted by ticks infected with spirochetal bacteria belonging to the genus Borrelia. Affected dogs typically present with intermittent... read more

in people, horses, and dogs. It also transmits Babesia microti, the agent of human babesiosis in coastal areas from Rhode Island to Virginia, andE muris eauclairensis , which causes granulocytic ehrlichiosis Ehrlichiosis, Anaplasmosis, and Related Infectionsin Animals Ehrlichiosis is a tick-transmitted disease that infects blood cells and can cause a variety of signs from none to fever and generalized achiness to possible fatality. Several species of bacteria... read more in people and rodents in the midwestern USA. The chief hosts of adult I scapularis are deer; livestock seldom graze in the wooded zones inhabited by this tick. Immature blacklegged ticks feed on a wide range of vertebrate hosts in April to July (nymphs) and June to August (larvae).

A related species, I affinis, ranges from South Carolina and Florida to Argentina. It is recorded chiefly from wildlife and has not been shown to be a vector. It is undergoing a northward range expansion, becoming established in the coastal plains of North Carolina and Virginia. Adults are active during the hot summer months. I affinis is recorded chiefly from wildlife but can infest domestic dogs. It is known to be a competent vector for the agent of Lyme disease.

In Africa, only four Ixodes spp have adapted to livestock. Chief among these is the South African paralysis tick, I rubicundus, of humid hill and mountain karoo vegetation in South Africa. Its salivary toxins cause a flaccid tetraplegia in livestock, people, dogs, and jackals. Immatures parasitize the rock hare, other hares, and elephant shrews. The life cycle of the tick is ~2 years. The ticks can often be found along the lower line of the neck, chest, and belly. The active period for adult ticks usually begins in late summer and reaches peak levels in autumn and early winter (April/May) and declines thereafter. The paralysis commonly occurs from February and reaches a peak in April and May. Other parasites of livestock in African highlands are I drakenbergensis (Natal), I lewisi (Kenya), and I cavipalpus (southern Sudan to Zimbabwe and Angola).

I holocyclus, the Australian paralysis tick, is considered the most medically important of the Australian tick fauna. Although most cases of tick bite are uneventful, some can result in life-threatening illnesses, including paralysis, tick typhus, and severe allergic reactions. The species is found throughout the year in a variety of habitats, particularly wet sclerophyll forests and temperate rainforest areas, across the humid coastal regions of eastern Australia.

Adults are more abundant in the spring and early summer, larvae in mid to late summer, and nymphs during winter. Natural hosts include bandicoots, kangaroos, possums, birds, and sometimes even reptiles, but it regularly attaches to domestic animals, including dogs, cats, cattle, and horses, and occasionally people. The tick injects a neurotoxin that causes progressive motor paralysis, respiratory depression, and death in animals that have no immunity to the toxin.

Most cases of tick paralysis seen by veterinarians are in dogs and cats, but other species can be affected. The condition has been recorded in sheep, cattle, goats, llamas, and Muscovy ducks. Fatal cases have occurred in people. In the larger species, the younger and smaller animals are likely to be affected.

I rubicundus, the karoo paralysis tick, may cause paralysis in sheep and goats in southern Africa. The immature stages of I rubicundus can be found on scrub hares and elephant shrews. The life cycle of the tick is ~2 years. The ticks can often be found along the lower line of the neck, chest, and belly. The active period for adult ticks begins usually late in summer and reaches peak levels in autumn and early winter (April/May) and declines thereafter. The paralysis commonly occurs from February and reaches a peak in April and May.