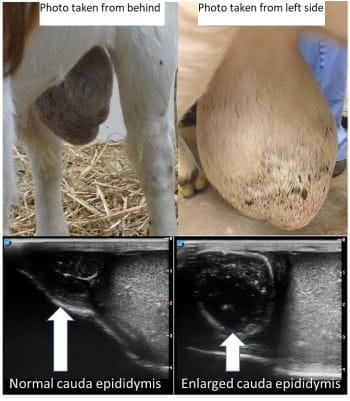 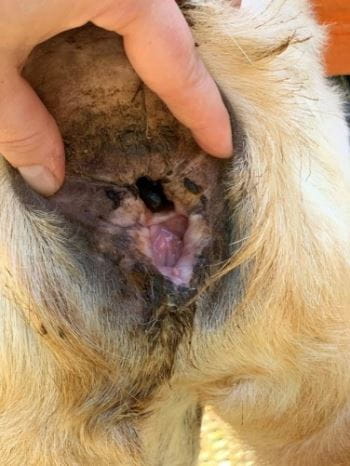 Does and bucks should be examined before the breeding season to optimize the likelihood of reproductive success. Does should be in marginal body condition (2–3 out of 5) to maximize response to focused feeding programs Nutrition in Goats Although goats and sheep have several similarities, their nutrient requirements differ in several ways. Goats are predominantly browsing animals but will graze. Still, many of the principles... read more and to minimize the risk of developing pregnancy toxemia Gestation length in goats is 145–155 days (average 150 days) and can be affected by breed, litter weight, environment, and parity. Generally, first-kidding does have one or two kids, and in... read more in the last trimester. Bucks should be in moderate body condition (3–4 out of 5) because they can lose more than 10% of their body condition throughout the breeding season.

Breeding animals should be in overall good health. Anemia Anemia in Animals Anemia is an absolute decrease in RBC numbers, hemoglobin concentration, or PCV. Signs include pale mucous membranes, increased heart rate, and hypotension. Diagnosis can be made by CBC, but... read more

due to heavy parasite infections and chronic debilitating diseases, such as pneumonia, can lead to loss of libido and/or infertility. Foot abnormalities, from overgrown hooves to severe laminitis Laminitis in Goats Laminitis in goats is seen worldwide, but the incidence is lower than that in dairy cattle and horses. Predisposing causes include overeating or sudden access to concentrates, high-grain and... read more , should be treated appropriately to ensure the ability of bucks to mount and does to be mounted. Bucks with caprine arthritis and encephalitis Caprine Arthritis and Encephalitis read more (CAE) virus infection may have painful, enlarged stifles, and, if they are even able to mount, are usually reluctant to ejaculate because of pain. Does infected with CAE may have mastitis Mastitis in Goats The organisms that infect the udder of does are similar to those in cows. Coagulase-negative staphylococci are generally the most prevalent and can cause persistent infections that result in... read more and should be culled. A complete assessment of the reproductive organs and of semen quality should be performed routinely on all bucks before the breeding season, whereas does may be assessed only if they do not conceive.

Palpation of the penis and prepuce of bucks during a physical examination is performed to ensure there are no masses or lesions that may prevent protrusion, intromission, or ejaculation. The penis can be assessed during electroejaculation or via manual exteriorization. The buck may be placed on its rump or laid on its side with pressure applied to the sigmoid flexure by an assistant while the prepuce is stabilized for penis exteriorization. Shearing wounds (especially in Angoras), prior balanoposthitis, and old fly-strike wounds and scarring around the prepuce may make protrusion of the penis impossible, and animals should be culled if severely affected. Persistent penile frenulum may also prevent exteriorization in young bucks and should be surgically corrected before breeding. Prior amputation of the urethral process to prevent obstruction by a calculus is common and has no apparent deleterious effect on breeding ability.

Although cryptorchidism is rare, a thorough reproductive examination in young breeding bucks should include confirmation that both testicles have descended completely. The testicles should be evaluated for size (scrotal circumference), consistency, and symmetry. Testicular hypoplasia occurs in only ~2% of intact bucks and is mostly associated with intersex condition; however, it may also be a manifestation of chronic malnutrition. Scrotal circumference is positively correlated with semen production capacity and should be >25 cm in mature bucks (>14 months). Scrotal circumference can vary by season and decrease by as many as 3 cm outside the breeding season.

The testicles and epididymides should be symmetric and slightly firm on palpation. Any asymmetry or changes in tone may indicate infection or injury and can adversely affect fertility. Orchitis and epididymitis are both rare, occurring in ~1% of breeding bucks, and affected bucks should be tested for Brucella melitensis, because bred does are at risk of stillbirths and abortions. Other causes of orchitis and epididymitis in bucks are of minimal concerns for transmission; however, treatments are generally unrewarding. Caseous lymphadenitis Lymphadenitis and Lymphangitis read more , spermatic granuloma, and calcification of the testicles (which also may be due to Corynebacterium pseudotuberculosis infection) all reduce or eliminate the buck’s fertility, and infected bucks should be culled. In extreme cases, ultrasound may be used to determine whether one or both testicles are affected and if hemi-castration is an option to preserve breeding potential.

Buck semen can be collected either via use of an artificial vagina or an electroejaculator. The former yields a higher quality sample; however, it requires the presence of a doe in heat to perform. Electroejaculation is more convenient and, thus, used more commonly. Once semen is obtained, it should be maintained at 37°C (98.6°F) and evaluated as quickly as possible. Grossly, the semen should be cloudy, white, and free of urine, blood, pus, or dirt. Occasionally, semen will be an off-yellow color and may be normal, though semen this color should be examined more closely for urine contamination.

Semen should be evaluated microscopically for motility, morphology, and presence of WBCs. Gross motility can be measured by placing a drop of undiluted semen on a warmed slide and evaluating microscopically on low-magnification (typically 100X). A satisfactory sample should exhibit anywhere from general oscillation to vigorous swirling. Sporadic oscillation usually indicates poor semen viability, though it may also be due to low concentration. Individual and progressive motility should also be assessed at higher magnification (400X) by diluting the semen with prewarmed isotonic diluent (eg, 0.9% saline) or extender. Sperm cells should be counted to determine a percentage of progressively motile sperm, with a minimum of 30% considered acceptable.

Sperm morphology should also be assessed microscopically at 1,000X to assess percentage of normal cells versus those with head, midpiece, or tail defects. Morphologic analyses can be performed with light microscopy by preparing a slide with eosin-nigrosin staining of sperm cells, or with a phase-contrast microscope, by preparing a wet-mount slide of formalin-killed sperm. Parameters for morphologic assessment are extrapolated from those used in bulls, with a minimum of 70% normal being acceptable. (Also see Breeding Soundness Examination of the Male Breeding Soundness Examination of the Male read more .) Recently, sperm with distal droplets have been reclassified as normal sperm cells in bulls and may be considered normal in bucks too, because these defects do not appear to affect fertility in ruminants. Bucks with questionable sperm morphology may be deferred and rechecked in 7 weeks, after a full spermatogenic cycle has passed. Notably, semen quality can be affected by photoperiod, so bucks evaluated outside the breeding season should always be deferred and rechecked in the fall.

Breeding soundness examinations in does are typically performed only after discovering the doe did not become pregnant during the breeding season. The external genitalia of doelings should be examined for abnormalities such as an enlarged clitoris, hypotrophic vulva, or increased urogenital distance that suggest intersex, a condition common in homozygous polled females, especially in Alpine, Saanen, and Toggenburg breeds. Intersex goats are sterile and should be culled. Examination of the external genitalia may also help to detect adhesions or rectovaginal fistulas in multiparous does that had a previous dystocia. These conditions may be surgically corrected in valuable does; however, does are more commonly culled because treatment may be unrewarding.

A speculum can be used to examine the walls of the vagina, vestibules, and cervix to search for lesions in does with fertility issues. Transabdominal and/or transrectal ultrasonography can be used to examine the uterus and ovaries for cysts, hydrometra (pseudopregnancy), or other abnormalities. Occasionally, a doeling may have a shortened vagina and no cervix, and segmental aplasia of various parts of the tract that warrant culling. In valuable breeding does, surgical laparoscopy or laparotomy may be performed to check for causes of infertility such as oviductal blockage, tumors, adhesions, or segmental aplasia that may not be visible on speculum examination or via ultrasonography.

Caseous Lymphadenitis of Sheep and Goats

Overview of Prepurchase Examination of Ruminants and Swine