Puberty and Estrus in Goats 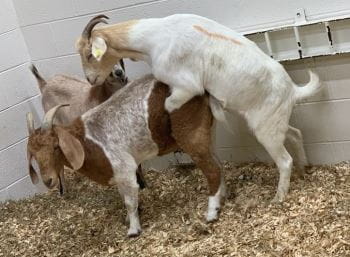 Goats are spontaneously ovulating, seasonally polyestrous animals with peak breeding activity occurring in the fall when day length is shortening . As day length decreases, melatonin secretion from the pineal gland increases which activates pulsatile GnRH release from the hypothalamus. Hypothalamic GnRH secretion stimulates release of luteinizing hormone (LH) and follicle-stimulating hormone (FSH) from the anterior pituitary and promotes the growth of follicles, stimulating the onset of the hypothalamic-pituitary-gonadal axis in short-day breeders.

Factors that affect onset and length of the breeding season include geographic location (ie, latitude and climate), breed, herd social structure, and photoperiod. In temperate regions, the natural breeding season is mostly restricted to the fall and winter to allow for kidding in the spring and summer, when nutritional resources are adequate. Under tropical and subtropical conditions, where temperature and photoperiod are less variable, an extended breeding period can be seen in certain breeds if appropriate resources are available to allow for kidding year-round.

The onset of puberty in goats typically occurs at 6–8 months of age in does and 4–6 months in bucks. Age at onset can vary between breeds and is influenced by environmental factors, such as the season of birth, breed, and nutritional status. In temperate regions, spring-born animals will undergo puberty at a younger age simply because physiologic maturity coincides with periods of decreased day length. Though some breeds, such as Pygmy goats, may reach puberty as early as 3 months of age, breeding should be delayed until the animal has reached at least 60% of its mature body weight to achieve higher conception rates and safer parturition. Larger goat breeds (eg, Nubian, LaMancha, Boer, and Saanen) can be safely bred when ~70 lb (32 kg). Angora kids should weigh a minimum of 27 kg and are frequently not bred until they are 1½–2½ years old. Veterinarians should inform owners of the potential for earlier puberty to prevent unintentional breeding within the herd.

The estrous cycle in goats is 21 days, on average, but can vary with different breeds or environmental conditions. A relatively high frequency of short cycles is characteristic of goats and tends to occur in young does and earlier in the breeding season. Longer cycles may be observed later in the season when does are transitioning into anestrus.

The mean duration of standing estrus has been reported to be 36 hours, although it can range from 24–48 hours depending on age, breed, season, and presence of a male. Breed-specific mean estrus duration has been reported for Mossi (20 hours), Angora (22 hours), Creole (27 hours), French Alpine (31 hours), Boer (37 hours), Nubian (42 hours) and Matou (58 hours) goats. Estrus detection is based on behavioral signs, bleating, flagging of the tail, reddened vulva, vaginal discharge (which causes the tail hairs to stick together), and occasional “riding” by other does. These behaviors are more pronounced in the presence of an intact male.

Ovulation can occur anywhere from 9–72 hours after the onset of estrus, typically toward the end of standing estrus. The ovulation rate varies based on breed, season, and nutritional status. Angora goats typically experience a single ovulation period; however, they may have two if sufficient nutrition is available. The mean ovulation rate has been reported to be 1.7 eggs per doe in Boer goats and 1.5 in Maure goats.

"Flushing," or "focused feeding," is a strategy in which a nutritional boost is supplied in a short period of time to enhance reproductive efficiency in ruminants without affecting body condition. This practice leads to a positive energy balance, which increases leptin and insulin concentrations, enhances glucose uptake, and is associated with increased folliculogenesis and ovulation rate. Dietary supplementation with beta-carotene, a vitamin A and retinoid precursor, at 50 mg/goat/day has reportedly produced this effect in does. Another strategy involves supplementing the diet of does with up to 0.45 kg/head/day of a 10%–12% crude protein grain for ~2 weeks before and after breeding.

Overview of Hormonal Control of Estrus

Overview of Musculoskeletal Disorders and Diseases in Dogs