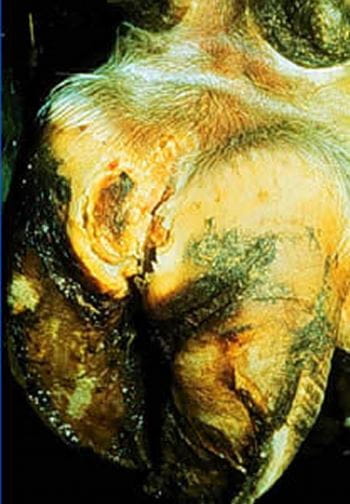 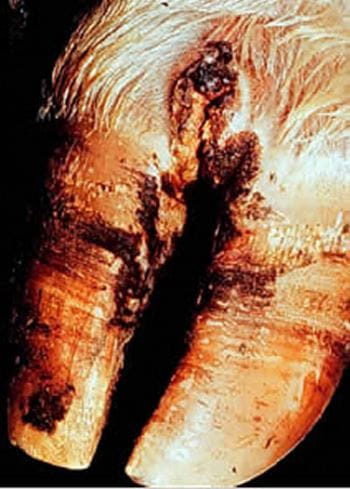 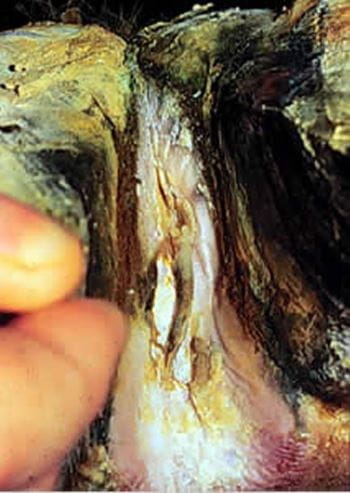 Interdigital dermatitis is caused by a mixed bacterial infection, but Dichelobacter nodosus has been considered to be the most active component. D nodosus is an anaerobe and exceptionally proteolytic. The source of the infection is the cow itself, and the infection spreads from infected to noninfected cows through the environment. D nodosus cannot survive for >4 days on the ground but can persist in filth caked onto the claws, creating an anaerobic environment. The bacteria first invade the epidermis of the skin between the claws but do not penetrate to the dermal layers. As the condition progresses, the border between the skin and soft heel horn at the posterior commisure disintegrates, producing lesions similar to ulcers or erosions. At this stage, the lesions cause discomfort. In tied systems, the hindlimbs are affected more often than the forelimbs. In loose housing systems, the distribution between fore- and hindlimbs is about equal. Animals on slatted floors are affected less often than animals on solid floors.

The early stages of the condition appear as an exudative dermatitis. The exudate oozes to the commissures of the interdigital space and forms a crust or scab, which may be observed occasionally on the dorsal surface of the digits. As the condition progresses, the animal shows discomfort by “paddling,” or constantly moving from one foot to the other. If the heels of the hind feet are especially painful, the limbs are held further back than normal. True lameness does not develop until a complicating lesion is present. After a prolonged period, during which the animal has avoided bearing weight on the heel, the horn beneath the heel increases in thickness and some aberrations of gait result. In dairy cows, interdigital hyperplasia (corns, fibroma) may be caused by the chronic irritation of the interdigital space. Often, the fibroma develops on one side of the interdigital space.

Foot-and-mouth disease can be confused with interdigital dermatitis if the interdigital space is not always examined carefully.

Systemic therapy, including the use of antibiotics, is not cost effective. In severe cases, the lesions should be cleaned and dried, after which a topical bacteriostatic agent is applied, eg, a 50% mixture of sulfamethazine powder and anhydrous copper sulfate. Alternatively, an animal can be confined in a footbath for 1 hr, bid for 3 days.

Good management and housing systems that keep claws dry and clean are most important. Regular foot trimming helps avoid complications. Footbathing, beginning in late fall and before clinical cases can be identified during high-risk periods, is essential in herds known to be infected. Weekly footbathing may be sufficient in the late fall, but the frequency may have to be increased in late winter.

© 2022 Merck & Co., Inc., Rahway, NJ, USA and its affiliates. All rights reserved.
Other Disorders of the Interdigital Space in Cattle

Other Disorders of the Interdigital Space in Cattle