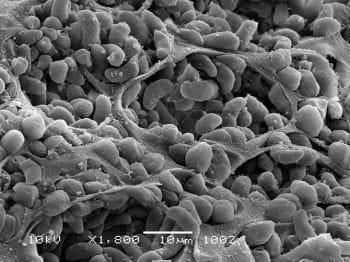 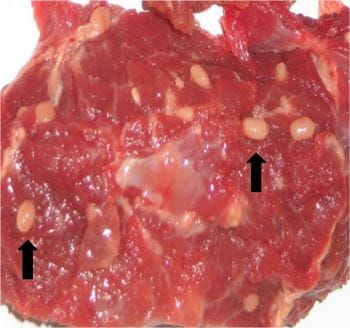 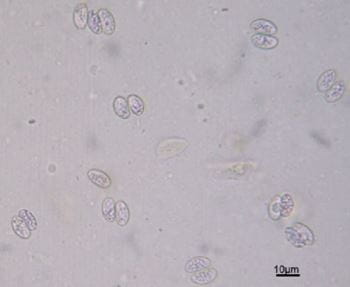 Sarcocystis spp oocysts and sporocysts observed by sugar flotation
Sarcocystosis is an intracellular protozoan infection that is generally asymptomatic but can cause mild gastrointestinal signs, including diarrhea, in cattle, sheep, pigs, horses, dogs, cats, and people. Typical control strategies are to prevent ingestion of prey or raw tissues and to reduce contamination of grass and water with feces of intermediate hosts.

Sarcocystosis is an intracellular infection that generally is chronic and asymptomatic, produced by Apicomplexan protozoans of the genus Sarcocystis (from the Greek sarkon for muscle and kystis for cysts). The main finding is the presence of muscle cysts (sarcocysts), which could be microscopic or macroscopic, in several intermediate hosts. Occasionally, eosinophilic myositis related to sarcocysts could arise. The presence of macroscopic sarcocysts and zoonotic species (Sarcocystis hominis and S suihominis) could cause meat condemnation. There is no effective treatment reported for the intracellular chronic stage (sarcocysts). By microscopy, the cysts are septate and contain thousands to millions of banana-shaped bradyzoites.

Approximately 1–2 weeks after ingesting muscle tissue that contains Sarcocystis spp cysts, the final host sheds infective oocysts and sporocysts in the feces for several months. Intestinal infections in most final hosts are asymptomatic, but occasionally, mild abdominal signs and symptoms, and diarrhea may occur in people and dogs. Diagnosis can be achieved by fecal flotation techniques.

After ingestion of sporocysts by a suitable intermediate host, sporozoites are liberated and initiate development of schizonts in vascular endothelia of mesenteric arterioles and lymph nodes. A second generation of endothelial schizonts is produced in capillaries from several organs. Merozoites released from these schizonts invade the muscle fibers and develop into the typical sarcocysts. Initially, the sporocyst contains only a few metrocytes (round cells), which give rise to the banana-shaped infective bradyzoites found in mature cysts (2–3 months after infection). Sarcocysts of some species are macroscopic (S aucheniae, S hirsuta, S gigantea), though most species are microscopic, even with great numbers of cysts present in the muscles.

S cruzi produce microscopic cysts, principally in myocardium, and can affect 100% of some cattle populations. S hirsuta has been primarily responsible for cattle condemnation for visible sarcocysts. S meischeriana is the most important species affecting pigs and may affect meat quality. Macroscopic cysts of S aucheniae are an important cause of condemnation of llama, alpaca, and guanaco meat.

Natural infections are usually asymptomatic. However, experimental infections with S cruzi sporocysts cause acute disease in calves; eosinophilic myositis in cattle; and abortions, stillbirths, and deaths in pregnant cows. Cases of necrotic encephalitis and fatal myocarditis in heifers have been reported. Similar pathogenicity has been demonstrated for S tenella in lambs and ewes and for S miescheriana in pigs. An outbreak of myositis affecting 20 ewes with flaccid paralysis was a result of heavy Sarcocystis infection.

Immune status of the host and the dose of sporocysts may be the most important factors for development of clinical disease. Natural infections are assumed to occur frequently with low numbers of sporocysts, leading to chronic and asymptomatic infections. Pathologic changes in myocardium and skeletal muscles were more pronounced in cows with lymphatic leukemia. “Immunization” using small doses of sporocysts appears to prevent development or reduce severity of clinical disease in sheep when challenged with large doses later (premunitive immunity). In dogs, a longer prepatent period and shortened patent period resulted after repeated infection.

People may also serve as intermediate hosts and suffer myositis and vasculitis. There are reports of tourists in Malaysia who apparently ingested S nesbitti sporocysts (monkey-snake life cycle) from food or water contaminated with snake feces. Human intestinal illness, with clinical signs and symptoms of abdominal pain, loss of appetite, nausea, vomiting, and diarrhea that lasted as long as 48 hours, has followed ingestion of raw or undercooked pork or beef containing sarcocysts of S suihominis and S hominis, respectively. Morphologic and molecular differentiation between S hominis and S suihominis cysts from those of nonzoonotic species is extremely important to avoid unjustified rejections. Different species can be identified by molecular studies and cyst wall morphology (mainly ultrastructure by transmission electron microscopy).

Sarcocystis spp infections are quite prevalent in farm animals (higher than 70% in some herbivore populations); however, there have been few outbreaks of clinical disease. Most animals are asymptomatic, and the tissue cysts (chronic stage) are discovered only at slaughter.

. After recovery from acute illness, calves failed to grow well and eventually died in a cachectic state.

Anemia Anemia in Animals Anemia is an absolute decrease in RBC numbers, hemoglobin concentration, or PCV. Signs include pale mucous membranes, increased heart rate, and hypotension. Diagnosis can be made by CBC, but... read more

, hepatitis, and myocarditis were the primary lesions in acute infection in sheep after experimental challenge with S tenella sporocysts. After recovery from acute illness, some sheep may lose their wool. S tenella may also induce abortion in sheep. At necropsy, acutely affected animals have hemorrhage of the serous membranes of the viscera and myocardium.

Sarcocystis spp infections are probably most important in growing ruminants and swine, in which they can result in subclinical anemia and reduced weight gain.

Sarcocystosis in dogs and cats is usually asymptomatic, but acute to chronic diarrhea may occur. Recently, S caninum and S svanai infections were associated with severe myositis and hepatitis syndrome in dogs.

Equine protozoal myeloencephalitis Equine Protozoal Myeloencephalitis read more (EPM) is caused principally by S neurona in American horses. Only asexual stages of this parasite have been found in horses, and they may be located in neurons and leukocytes of the brain and spinal cord. Opossums (Didelphis virginiana and D albiventris) are its definitive hosts. Clinical signs in horses include gait abnormalities such as ataxia, knuckling, and crossing over. Muscle atrophy of the hindlimb, which is usually unilateral, is frequent. The lesions are typically multifocal, and brain-stem involvement is common. Depression, weakness, head tilt, and dysphagia are other possible signs. EPM can mimic many neurologic diseases. Horses may also develop a myopathy. Multifocal myositis has been reported and is possibly due to another Sarcocystis species, S fayeri, with horses as the intermediate host. PCR is an important diagnostic method.

S calchasi can produce protozoal encephalitis in pigeons with severe brain lesions and muscle cysts at the same time.

Amprolium (100 mg/kg/day for 30 days), fed prophylactically, reduced illness in cattle inoculated with S cruzi. Prophylactic administration of amprolium or salinomycin also protected experimentally infected sheep. Vaccines are not available. Experimental work demonstrated that infected pork and beef could be made safe for consumption by cooking at 70°C (158°F) for 15 minutes or by freezing at –4°C (24.8°F) for 2 days or –20°C (-4°F) for 1 day.

Pyrimethamine and sulfadiazine (1 mg/kg/day and 20 mg/kg/day, respectively, for 40 days or longer) is the traditional therapy to treat horses with EPM. Diclazuril and toltrazuril (5 mg/kg) are potentially useful prophylactic agents against S neurona.

In dogs and cats, potentiated sulfonamides can be used to eliminate the intestinal infection.

Overview of Arthropathies in Large Animals