, DVM, PhD, The University of Melbourne 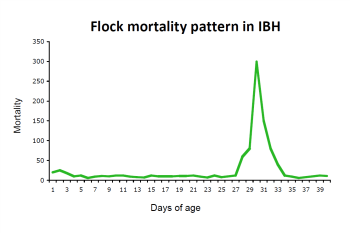 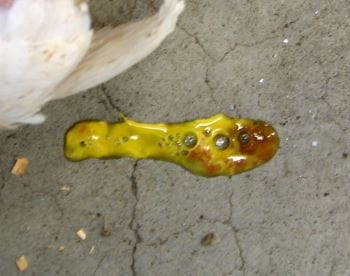 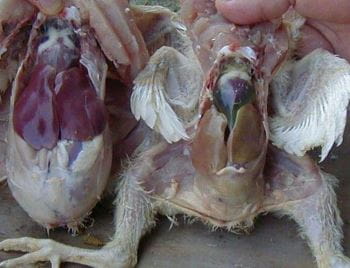 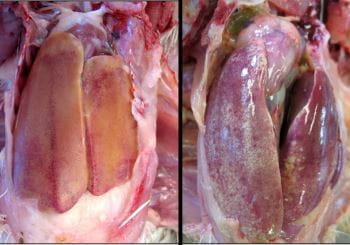 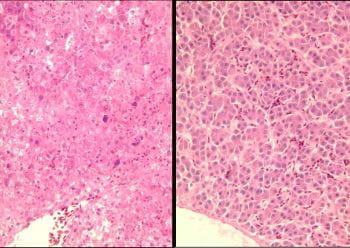 Microscopic hepatic lesions, IBH and HHS
Inclusion body hepatitis and hepatitis hydropericardium syndrome are diseases of young broilers caused by fowl adenoviruses. Clinical signs are nonspecific but often include a sudden increase in mortality. Gross lesions include a swollen liver containing multiple pale or hemorrhagic foci and hydropericardium. Definitive diagnosis is usually made by histopathology or PCR. There is no treatment, but prevention is achieved by vaccination.

Adenoviruses are widespread throughout all avian species. Adenoviruses or their antibodies may be found in healthy birds. Despite their widespread distribution, most adenoviruses cause no or only mild disease; however, some are associated with specific clinical conditions. Fowl adenoviruses (FAdV) in chickens are the etiologic agents of two important diseases known as inclusion body hepatitis (IBH) and hepatitis hydropericardium syndrome (HHS). A syndrome referred to as gizzard erosion has also been linked to FAdV (especially FAdV-1) in several countries around the globe.

Based on virus neutralisation assay, FAdVs responsible for IBH and HHP have been classified into 13 serotypes (1-7, 8a, 8b, and 9-11). Based on molecular techniques, however, FAdVs have been classified into five species (A-E). Variable levels of cross protection have been reported between viruses belonging to different serotypes or genotypes. Recent analyses of the whole genome sequence from a large number of FAdVs have revealed recombination events between FAdV strains, which reflects a complex cross-protection relationship between them.

Sudden mortality usually is seen in chickens <6 weeks old and as young as 4 days of age. Mortality normally ranges between 2% and 40% in IBH and between 20% and 80% in HHS. Mortality rates also vary depending on the pathogenicity of the virus and infection with other viral or bacterial agents. Signs associated with diseases caused by other pathogens (eg, bacteria, fungi, or viruses) commonly occur if birds are immunosuppressed.

Flocks affected with IBH/HHS often have abrupt onset of mortality, and individual chickens may show nonspecific clinical signs such as lethargy huddling, ruffled feathers, and yellow, mucoid droppings due to excess bile acids. Mortality usually lasts for 5 days in IBH and longer in HHS.

In IBH and HHP, the liver is often swollen and enlarged and has yellowish discoloration and multiple pale and/or red (hemorrhagic) foci. In cases of HHS, there may be as much as 10 mL of a straw-colored transudate in the pericardial sac. Histopathologic lesions in the liver include acute hepatocytic degeneration, necrosis, mononuclear cell infiltration and rare to widespread basophilic intranuclear inclusion bodies. Lesions in the heart include myocardial edema and necrosis.

A tentative diagnosis is usually based on a pattern of spiking mortality and typical gross lesions. The diagnosis is confirmed by microscopic examination of the affected tissues and detection of typical lesions, especially intranuclear inclusion bodies or by PCR. The latter can also be used in combination with nucleotide sequencing or high-resolution melt curve analysis of the amplified DNA for the classification of the viruses. This information is useful for epidemiologic investigations and for the development of an effective vaccination strategy.

As with many other viral diseases, there is no treatment. Antibiotics may help prevent secondary bacterial infections.

Both live and inactivated vaccines are used to control IBH and HHS in many countries. The FAdV most frequently used to prepare commercial vaccines belong to serotypes 4 and 8. Primary breeders with stringent biosecurity practices sometimes use autogenous inactivated vaccines to ensure the transfer of maternal immunity from breeding flocks to their progeny. In Australia, a live vaccine is given via drinking water to breeders between 10–14 weeks of age. In other countries, including Mexico, Pakistan, and many countries in South America, inactivated vaccines are routinely used to vaccinate breeders and broilers. When breeders are properly vaccinated, antibodies generated by the vaccine are transmitted to the progeny, providing protection against field infections and clinical disease. In some countries, broilers are occasionally vaccinated at <10 days of age when their parents either do not have serotype-specific adenovirus antibodies or maternal antibody transmission is erratic because of improper vaccination procedures that result in a substantial number of unvaccinated birds.