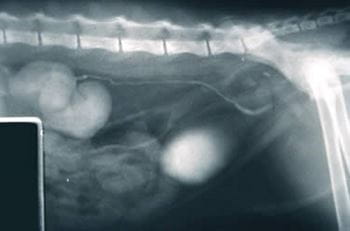 This defect is most commonly reported in 3- to 6-mo-old dogs, with female dogs affected 8 times more frequently than male dogs. In dogs, ectopic ureter has a reported incidence of 0.016%–0.045%. In horses, ectopic ureter is the most common congenital anomaly affecting the urinary tract; as in dogs, it is significantly more common in fillies than in colts. Ectopic ureters are infrequently identified as a clinical problem in cattle, sheep, or pigs. Other anomalies frequently associated with ectopic ureter include hydroureter, hydronephrosis, renal hypoplasia, bladder hypoplasia, and urethral sphincter incompetence. Continual dripping of urine is the classic sign, although animals with unilateral ectopic ureter may void normally; the inability to void normally suggests bilateral ectopic ureters. A low-grade vaginitis or vulvitis may also be present due to urine scalding. Involved ureters may open into the urethra, the uterus, or the vagina. Unilateral ectopic ureter is seen with equal frequency on right and left sides, and involvement is bilateral in ~25% of cases. Ectopic ureters generally result from disruption of development of the mesonephric and metanephric duct systems. A genetic component is suspected on the basis of identifying high-risk breeds (West Highland White Terriers, Fox Terriers, and Miniature and Toy Poodles) and a familial occurrence in Siberian Huskies and Labrador Retrievers. Diagnosis is confirmed by IV urography that traces the course of the ureter.

Successful surgical treatments usually involve transplantation of affected ureters into the bladder, or ureteronephrectomy. A recent review of surgically repaired ectopic ureters in female dogs indicated that factors including left- or right-sided ectopic ureter, unilateral or bilateral ectopic ureter, presence of hydroureter, or presence of urinary tract infections were not significant to influencing postoperative incontinence. Another study showed that female dogs with ectopic ureters treated by cystoscopic-guided laser ablation had a 47% postoperative success rate based on their maintaining urinary continence. Additional medical management further improved the urinary continence rate to 77%. Indications for ureteronephrectomy may include severe ipsilateral renal disease such as hypoplasia, hydronephrosis, or pyelonephritis in the presence of a normally functioning contralateral kidney. Important postoperative complications are persistent incontinence, hydronephrosis, and dysuria. Incontinence occurs most often in cases of bilateral ectopic ureters and may be due to abnormal development of the bladder neck and urethra. An adrenergic agent such as phenylpropanolamine (0.5–1.5 mg/kg, PO, bid-tid) may help minimize the incontinence.

Less frequently recognized ureteral anomalies include aplasia, duplication, and ureterocele. Ureteroceles are characterized by dilation of the submucosal ureter segment within the bladder. Diagnosis is by excretory urography. Appropriate therapy is ureteronephrectomy if the lesion is unilateral with secondary hydronephrosis and hydroureter. If the proximal ureter and kidney are normal, excision or incision of the ureterocele, in addition to ligation of any ectopic distal channel, has been successful.