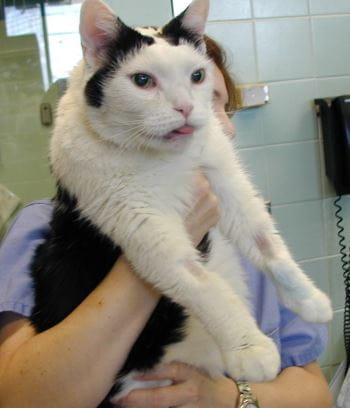 Acromegaly, cat
Acromegaly is caused by excess secretion of growth hormone (GH) in adult animals. In cats, it is due to GH-secreting tumors of the anterior pituitary. Signs related to diabetes mellitus are typically the first clinical signs noticed. Growth of the extremities, skull, and muscles occur in some cats. Cardiomegaly and azotemia develop late in the disease. Diagnosis can be made by measuring insulin-like growth factor 1 or by CT scan of the pituitary. Treatments include medication, radiation, or hypophysectomy, along with high doses of insulin to control insulin resistance.

Acromegaly, or hypersomatotropism, results from chronic, excessive secretion of growth hormone in the adult animal. Acromegaly in cats is caused by a growth hormone–secreting tumor of the anterior pituitary. In cats, these tumors grow slowly and may be present for a long time before clinical signs appear.

Feline acromegaly occurs in older cats (8–14 years old) and appears to be more common in males. Clinical signs of uncontrolled diabetes mellitus are often the first sign of acromegaly in cats; therefore, polydipsia, polyuria, and polyphagia are the most common presenting signs. Net weight gain of lean body mass in cats with uncontrolled diabetes mellitus is a key sign of acromegaly. Organomegaly, including renomegaly, hepatomegaly, and enlargement of endocrine organs, is also seen. Some, but not all, cats show the classic enlargement of extremities, body size, jaw, tongue, and forehead that is characteristic of acromegaly in people. Some of the most striking manifestations are seen in the musculoskeletal system and include an increase in muscle mass and growth of the acral segments of the body, including the paws, chin, and skull. Stridor may be detected as a result of increased soft-tissue enlargement of the epiglottis and surrounding tissues. Cardiovascular abnormalities such as cardiomegaly (radiographic and echocardiographic), systolic murmurs, and congestive heart failure develop late in the disease course. Azotemia also develops late in the course of the disease in ~50% of acromegalic cats. Neurologic signs of acromegaly in people, such as peripheral neuropathies (paresthesias, carpal tunnel syndrome, sensory and motor defects) and parasellar manifestations (headache and visual field defects), are not generally detected in acromegalic cats.

Impaired glucose tolerance and insulin resistance resulting in diabetes mellitus are seen in all cats with acromegaly. Measurement of endogenous insulin reveals dramatically increased serum insulin concentrations. Despite severe insulin resistance and hyperglycemia, ketosis is rare. Hypercholesterolemia and mild increases in liver enzymes are attributed to the diabetic state. Hyperphosphatemia without azotemia is also a common clinicopathologic finding. Urinalysis is unremarkable except for persistent proteinuria. In a recent study, acromegaly was the most common (25%) underlying cause of non-insulin–dependent diabetes mellitus in cats, and it should be suspected in any cat that does not respond to standard therapy for type 2 diabetes mellitus (high-protein, low-carbohydrate diet and glargine insulin) within 4 months of initiating therapy.

Gross necropsy findings in acromegalic cats may include:

A definitive diagnosis requires measurement of increased plasma growth hormone or insulin-like growth factor 1 (IGF-1) concentrations in suspected cases. Unfortunately, feline growth hormone assays are no longer available. Serum IGF-1 concentrations are often dramatically increased in acromegalic cats (as in affected people). Currently, the most definitive diagnostic test is CT of the pituitary region. Results of CT, coupled with the exclusion of other disorders that cause insulin resistance (hyperthyroidism, hyperadrenocorticism) and clinical signs and laboratory abnormalities, support a diagnosis of acromegaly.

Medical therapy in people includes the use of dopamine agonists, such as bromocriptine, and somatostatin analogues.. Recently, treatment with the novel somatostatin analog pasireotide has been shown to be successful in acromegalic cats; however, the dosing requires further study and the drug is relatively expensive. Radiation therapy probably offers the greatest chance for success with low rates of morbidity and mortality. The disadvantages include the slow rate of tumor shrinkage (>3 years) and the occurrence of hypopituitarism, cranial and optic nerve damage, and radiation injury to the hypothalamus. Hypophysectomy is available on a limited basis, but is a viable treatment for acromegalic cats. As in Cushing disease, hypophysectomy may be associated with a rapid drop in hormone levels, resulting in a remission in clinical signs; however, side effects such as transient diabetes insipidus are commonly observed.

The short-term prognosis in cats with untreated acromegaly is fair to good. Insulin resistance is generally controlled satisfactorily by using large doses of insulin divided into several daily doses. Mild cardiac disease can be managed with diuretics and vasodilators. The longterm prognosis is relatively poor, however, and most cats die of congestive heart failure, chronic renal failure, or signs of an expanding pituitary mass. The longterm prognosis may improve with early diagnosis and treatment.

Also see Pet Health content regarding feline acromegaly Feline Acromegaly The pituitary gland is located near the center and bottom of the brain. It produces a number of critical hormones that control many parts of the body, including several other endocrine glands... read more .

Disorders of the Pituitary Gland in Cats