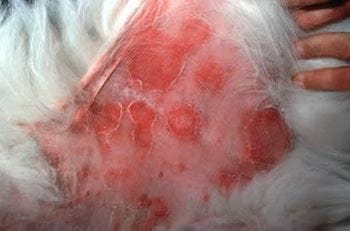 Superficial pyoderma, dog
Superficial pyoderma is a bacterial infection confined to the upper layers of the skin and hair follicle. The infection is usually secondary to local trauma, keratinization disorders, parasitic infestation, hormonal factors, or allergies. In dogs, superficial pyoderma is the most common form of pyoderma, and it is also the most common reason for antimicrobial use in small animal practice. Performing skin cytology is key for the identification of bacteria and inflammatory cells, with cocci and neutrophils being the most common findings. Management of pyoderma has become, unfortunately, progressively more difficult due to the presence of methicillin- and multidrug-resistant bacteria. Identifying and controlling the underlying cause is critical to avoid recurrence.

Pyoderma literally means “pus in the skin” and can be caused by infectious, inflammatory, and/or neoplastic etiologies; any condition that results in the accumulation of neutrophilic exudate can be termed a pyoderma. Most commonly, however, pyoderma refers to bacterial infections of the skin. Pyodermas are common in dogs and less common in cats.

Bacterial pyodermas are either simple or complex infections. Simple infections are those occurring in young animals that are triggered by one-time or simple events, eg, flea infestation Fleas in Dogs and Cats Ctenocephalides felis (cat flea) on a severely flea-infested and anemic cat. Larva of Ctenocephalides spp (larvae are 1–5 mm in length, with hairs projecting laterally from each segment). Ctenocephalides... read more

. Complex infections are recurrent and are associated with underlying diseases, such as:

Either simple or complex infections can be superficial or deep. Bacterial pyodermas limited to the epidermis and hair follicles are referred to as superficial, whereas those that involve the dermis, deep dermis, or cause furunculosis are referred to as deep. Etiologic classification refers to the pathogenic organism involved in the infection (eg, staphylococci, streptococci, etc). Infections are superficial and secondary to a variety of other conditions.

Bacterial pyoderma is usually triggered by an overgrowth/overcolonization of normal resident or transient flora. The primary pathogen of dogs is Staphylococcus pseudintermedius.

Pyoderma can be classified based on the depth of infection: surface, superficial, or deep. Surface pyoderma includes acute moist dermatitis (hot spots), fold pyoderma (intertrigo), and bacterial overgrowth syndrome (erythema with large numbers of bacteria but no other clinical signs). Superficial pyoderma or bacterial folliculitis extends into the follicular ostium and epidermal tissue. Deep pyoderma is less common but more serious because it expands into the dermis, with a higher risk of bacteremia. Deep pyoderma can be seen with any underlying trigger or acquired immunodeficiency, and it is commonly associated with demodicosis Mange in Dogs and Cats Sarcoptes scabiei. Sarcoptes scabiei var canis infestation is a highly contagious disease of dogs found worldwide. The mites are fairly host specific, but animals (including people) that come... read more

The most important factor in superficial pyodermas that allows a bacteria to colonize the skin surface is bacterial adherence, or “stickiness,” to the keratinocytes. Warm, moist areas on the skin, such as lip folds, facial folds, neck folds, axillary areas, dorsal or plantar interdigital areas, vulvar folds, and tail folds, often have higher bacterial counts than other areas of skin and are at an increased risk of infection. Pressure points, such as elbows and hocks, are prone to infections, possibly because of follicular irritation and rupture due to chronic repeated pressure. Any skin disease that changes the normally dry, desert-like environment to a more humid environment can predispose the host to overcolonization of the skin with resident and transient bacteria.

The hallmarks of deep pyoderma in dogs are pain, crusting, odor, and exudation of blood and pus. Erythema, swelling, ulcerations, hemorrhagic crusts and bullae, hair loss, and draining tracts with serohemorrhagic or purulent exudate may also be seen. The bridge of the muzzle, chin, elbows, hocks, interdigital areas, and lateral stifles are more prone to deep infections, but any area may be involved. Acral lick granulomas and areas of pyotraumatic dermatitis are also clinical manifestations of deep pyoderma. Interdigital furunculosis Interdigital Furunculosis read more is another manifestation of deep pyoderma.

Superficial pyoderma in cats is usually due to Staphylococcus spp. It is often overlooked and underdiagnosed. Feline pyoderma is most common in allergic skin diseases, parasitic diseases, and feline chin acne.

Skin cytology is one of the most valuable tools for the diagnosis of pyoderma, allowing the identification of inflammatory cells and bacteria. Skin cytology can also help identify Malassezia dermatitis, which is a common coinfection. Bacterial culture and susceptibility testing are particularly important in cases of recurrent pyoderma due to the increased incidence of resistant infections and are essential in the selection of systemic antimicrobial therapy.

Skin cytology Cytology Cytology is a useful clinical tool for investigation of disease processes, and the techniques and their interpretation have developed into an entire discipline. This discussion is a brief guide... read more

Because pyodermas are triggered by underlying problems, appropriate diagnostic testing and treatment of underlying triggers is necessary. The most common causes of recurrent bacterial pyoderma include failure to identify an underlying trigger, antibiotic undertreatment (dosage too low or duration of therapy too short), concurrent use of glucocorticoids or other immunosuppressive therapy, wrong antibiotic choice, or incorrect dosage.

The most common underlying triggers of superficial pyoderma include:

With the spread of methicillin-resistant (MRS), multidrug-resistant (MDRS) Staphylococcus, the treatment of pyoderma has become more challenging. Empirical selection of systemic antibiotics is increasingly more difficult, and it should be based on the results of bacterial culture and susceptibility results for cases of superficial pyoderma not responding to empirical therapy, in animals with a history of MRS, and all cases of deep pyoderma. Systemic therapy is required for deep pyoderma and for widespread or severe superficial infections; localized, mild cases of superficial pyoderma can be treated with topical treatments alone. Topical therapy can also be used as an adjunctive treatment for both superficial and deep pyodermas, to decrease the need for systemic therapy.

Because Staphylococcus pseudintermedius, the most common pathogen associated with pyoderma, produces beta-lactamase, empirical use of these antibiotics should be avoided:

Most strains are also resistant to tetracycline and streptomycin.

As a consideration for systemic therapy, antimicrobial agents can be classified into first- and second-tier drugs, depending on the likelihood that they will be effective against staphylococci and on their spectrum of activity against gram-negative pathogens. First-tier drugs can be used empirically in animals with no history of MRS. Treatment with second-tier agents, such as fluoroquinolones, should always be based on bacterial culture and sensitivity results. Duration of therapy is important for successful management.

There is good evidence that topical therapy can be effective as the sole treatment in superficial pyoderma, including cases with MRS. The best formulation to use will vary depending on the extent of the lesions, type of coat, and ease of application. Shampoos, creams, gels, ointments, and mousses are available. Active ingredients in antibacterial shampoos include:

Bacterins are defined as suspensions typically of lysed or attenuated bacteria used as vaccines to increase immunity to particular pathogens or a disease and have been used sporadically in dogs for recurrent pyoderma. The mechanism of action is poorly understood. Improvement is determined by a decrease in frequency or severity of signs. When using bacterins, it is important to control the infection first by giving concurrent antimicrobial therapy for the first 4–6 weeks. The usual dosage is 0.5 mL given subcutaneously twice weekly for 10–12 weeks. If efficacious, the frequency can be decreased to once a week or less, but in most cases, lifelong therapy is needed.

Mange in Dogs and Cats