Congenital and Inherited Anomalies of the Musculoskeletal System in Horses 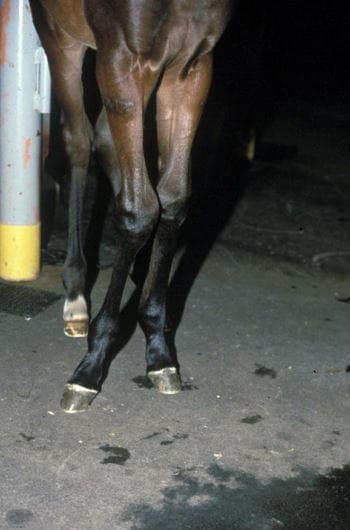 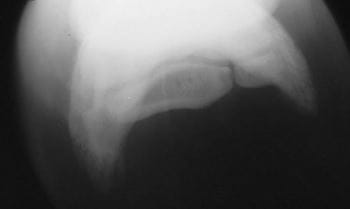 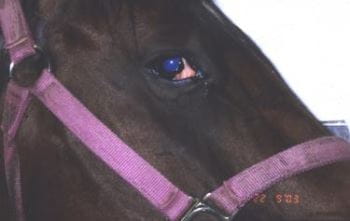 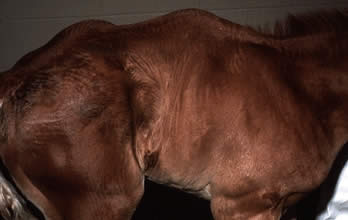 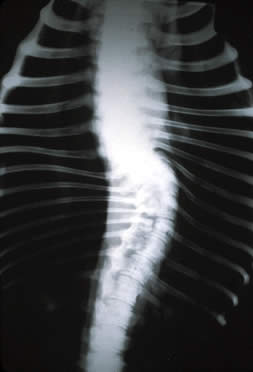 In angular limb deformities, which are congenital or acquired skeletal defects, the distal portion of a limb deviates laterally or medially early in neonatal life. In utero malposition, hypothyroidism, trauma, poor conformation, excessive joint laxity, and defective endochondral ossification of the carpal or tarsal and long bones have been implicated. One to four limbs may be affected, depending on the severity of the condition.

The carpus is affected most frequently, but the tarsus and fetlocks are occasionally involved. The deviation is obvious but varies in severity. A lateral deviation (valgus) of up to 6° of the distal portion of a limb may be regarded as normal. Most foals are asymptomatic, but lameness and soft-tissue swelling can accompany severe deviations. Outward rotation of the fetlocks invariably accompanies carpal valgus. Foals with defective ossification of the carpal cuboidal bones or excessive joint laxity are frequently lame, as the legs become progressively deviated. Affected limbs must be palpated carefully to detect ligament laxity and specific areas that may be painful.

Diagnosis should include a precise determination of the site and cause for the deviation. The distal radial metaphysis, physis, epiphysis, or cuboidal bones may be the site of deviation. Radiography helps detect physeal flaring, epiphyseal wedging, and deformation of carpal bones. Mildly affected foals frequently improve spontaneously.

Treatment depends on the severity of the condition and tissues affected. Excessive joint laxity, with or without cuboidal carpal bone involvement, requires tube casts or splints. The fetlock and phalangeal region should not be included in the casts, which should protect the weak joint from trauma but allow restricted exercise to maintain tendon and ligament tone. Such limb support may be required for as long as 6 weeks.

Physeal and epiphyseal growth disturbances are also amenable to surgical correction through hemicircumferential transection and periosteal elevation of the distal radius on the concave side of the defect or through transphyseal bridging of the physis on the convex side. These surgeries must be performed before the physeal growth plates close (as early as 2–4 months of age for fetlocks), and success depends on continued growth and development of the bones. Sequential examinations and radiographs are necessary to follow spontaneous improvement or to establish a need for surgery.

Without treatment, the prognosis for severe carpal valgus is poor. The conformational anomaly leads to early degenerative joint disease. Likewise, deformity of the cuboidal carpal bones contributes to a poor prognosis. However, with early detection, careful evaluation, and proper surgical treatment, most foals respond favorably.

Dwarfism is the lack of appropriate growth, resulting in a smaller horse. A dwarf horse can be proportionate or disproportionate. Proportionate dwarfs are a result of a deficiency in growth hormone, whereas disproportionate dwarfs are a result of abnormal thyroid hormone levels. The latter results in a foal with musculoskeletal immaturity, characterized by delayed cuboidal bone development, a large head, silky hair coat, floppy ears, and mandibular brachygnathia. Determination and interpretation of either growth hormone assays or thyroid hormone function is not entirely developed or understood in horses, hence the importance of clinical diagnosis. Efforts toward characterizing thyroid function and growth hormone levels should be undertaken to prevent overdiagnosis of this condition. A nitrate toxicity theory has been confirmed in certain foals born with "congenital hypothyroid syndrome."

Glycogen branching enzyme (GBE) deficiency may be a common cause of neonatal mortality in Quarter horses and related breeds that is obscured by the variety of clinical signs that resemble other equine neonatal diseases. Affected foals lack the enzyme necessary to store glycogen in its branched form and therefore cannot store sugar molecules. The disease is fatal; heart muscle, brain, and skeletal muscles are unable to function.

Clinical signs of GBE deficiency may include transient flexural limb deformities, stillbirth, seizures, respiratory or cardiac failure, and persistent recumbency. Leukopenia, high serum CK, AST, and γ-glutamyl transferase are present in most affected foals. Gross postmortem lesions are inconclusive. Muscle, heart, or liver samples contain abnormal periodic acid-Schiff–positive globular or crystalline intracellular inclusions in amounts proportional to the foal’s age at death. Accumulation of an unbranched polysaccharide in tissues is suggested by a shift in the iodine absorption spectra of polysaccharide isolated from the liver and muscle of affected foals. Skeletal muscle total polysaccharide concentrations are reduced, but liver and cardiac muscle glycogen concentrations are normal. Several glycolytic enzyme activities are normal, whereas GBE activity is virtually absent in cardiac and skeletal muscle, as well as in liver and peripheral blood cells. GBE activities in peripheral blood cells of dams of affected foals and several of their half-siblings or full siblings are ~50% of controls. GBE protein in liver is markedly reduced to absent in affected foals. Pedigree analysis supports an autosomal recessive mode of inheritance.

Hernias are defects in the muscle wall that permit intestines/organs to move into an abnormal location. An umbilical hernia is the incomplete closure of the abdominal wall at the umbilicus. Larger umbilical hernias should be surgically repaired to prevent incarceration of bowel. A congenital diaphragmatic hernia is an opening in the thoracic diaphragm, permitting the displacement of abdominal organs into the thorax. These hernias usually go undetected until the horse is presented for GI signs (colic) rather than respiratory issues. Inguinal hernias are commonly seen in certain breeds, particularly Standardbred and draft horses. They are most common in male foals, and a large scrotal sac is seen. Affected horses rarely present with signs of colic. The hernia should be reduced on a daily basis, and most cases will resolve in 4–6 months. In cases presented with signs of colic or when there is edema in the inguinal/ventral area (ruptured hernia), surgical repair is advised.

Hyperkalemic periodic paralysis (HYPP) is marked by sudden attacks of paralysis which, in severe cases, may lead to collapse and sudden death. It is an inherited mis-sense mutation in the gene encoding the alpha chain of the adult skeletal muscle sodium channel, resulting in increased sodium permeability across the skeletal muscle cell membrane. Quarter horse, Paint horse, and Appaloosa progeny tracing back to the Quarter horse sire "Impressive" can be affected with this disease and must be eliminated from any reproductive program. Most affected horses are heterozygotes. A sequela of HYPP in horses that undergo general anesthesia is malignant hyperthermia syndrome Malignant Hyperthermia read more .

Spine defects and skeletal malformations include scoliosis (lateral deviation of the back), synostosis (fusion of vertebrae), lordosis (ventral dorsal deviation of the back), kyphosis (dorsal deviation of the back), torticollis (twisted neck), and wry nose (twisted nose). Although all of these conditions are uncommon in foals, congenital scoliosis is encountered most frequently. On clinical examination, it is often difficult to assess the severity. A better appreciation of the condition can be obtained by radiographic examination. In mild cases, improvement is spontaneous and may be complete. Even in the more severe cases, there is rarely any obvious abnormality in gait or maneuverability. However, these foals frequently are not raised because they appear unlikely to be able to withstand being ridden or worked.

Another occasional congenital deformity is that of synostosis (fusion of vertebrae), which may be associated with secondary scoliosis. Radiography is necessary for confirmation.

Congenital lordosis (swayback) is associated with hypoplasia of the intervertebral articular processes. In adult horses, degrees of acquired lordosis and kyphosis (roachback) are occasionally seen, which contribute to back weakness. Diagnosis is based on the clinical appearance and can be confirmed by radiography, which reveals an undue curvature of the vertebral column, usually in the cranial thoracic region (T5–10) in lordosis and in the cranial lumbar region (L1–3) in kyphosis.

Other, less common skeletal malformations include incomplete closures of the bony spinal canal (cervical meningomyelocele, spina bifida) and hydrocephalus (abnormal accumulation of fluid in the cranial vault with resultant enlargement of the head).

Tying-up syndrome in Thoroughbreds is an inherited abnormality in the way calcium is regulated by membrane systems in the skeletal muscle. The narrow genetic origin of Thoroughbreds and the common lineage of the pedigrees of horses with tying-up would support the possibility of an inherited trait. The disease might lie dormant unless specific factors trigger the calcium regulatory system to malfunction. Initiating events include stress, excitement, lameness, high-grain diets, and exercise at submaximal speeds. Also see Exertional Myopathies in Horses Exertional Myopathies in Horses Exertional myopathy in horses is a syndrome of muscle fatigue, pain, or cramping associated with exercise. Less common exertional myopathies that cause exercise intolerance without muscle necrosis... read more .

A different form of tying-up is polysaccharide storage myopathy (PSSM). It is characterized by the accumulation of glycogen polysaccharides in skeletal muscle. The recent identification of a genetic mutation for PSSM revealed that there are actually no less than two forms of this disease.

A form of PSSM called type 1 PSSM is caused by a mutation in the glycogen synthase gene. Type 1 PSSM occurs in many Quarter horses and related breeds, draft breeds, some Warmblood breeds, and several other breeds. It has not been identified in Thoroughbreds to date. This mutation causes the muscle to continually make glycogen. Consequently, when beginning exercise, horses have trouble switching over to burn glycogen for energy rather than storing glycogen in their muscles. Affected horses develop stiffness, muscle cramping, and soreness with light exercise probably due to a deficit of energy generation in their muscles. Some horses with this disorder also have an increased sensitivity to insulin, further increasing storage of glycogen in the muscle. PSSM type 1 horses are often calm, sedate horses that tie-up after a lay-up, especially when fed grain. They tend to be found in disciplines such as halter and pleasure horse performance and do not usually perform well at speed.

Type 2 PSSM has a slightly different microscopic appearance, and the genetic cause is yet unknown. It occurs in Quarter horse–related breeds, Warmbloods, and likely other light horse breeds, possibly including Thoroughbreds. Whereas type 1 PSSM can be diagnosed by a DNA-based blood or hair root test, type 2 PSSM requires examination of a muscle biopsy. Treatment of both forms of PSSM involves supplying horses with an alternative source of energy such as fat rather than sugar. Eliminating grain and sweet feed completely and feeding fats such as rice bran or vegetable oils stabilizes blood sugar and provides fat for energy metabolism. It is essential that horses with PSSM be turned out as much as possible and exercised often, even if only for 10 minutes/day. Horses with mild to moderate clinical signs might be able to return to full athletic performance with careful dietary and management changes, which include regular daily exercise without extended periods of inactivity. Breeding horses with PSSM have at least a 50% chance of passing the trait on to offspring.

Congenital and Inherited Anomalies of the Musculoskeletal System in Multiple Species

Diseases of Llamas and Alpacas