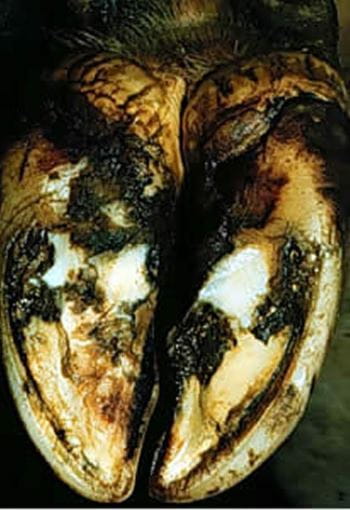 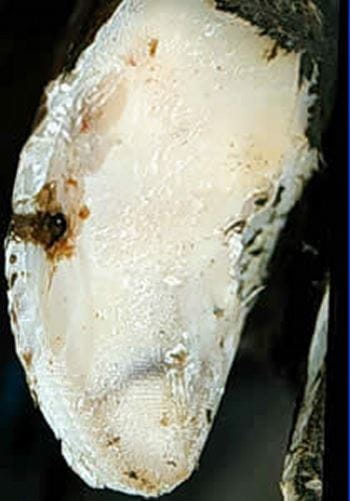 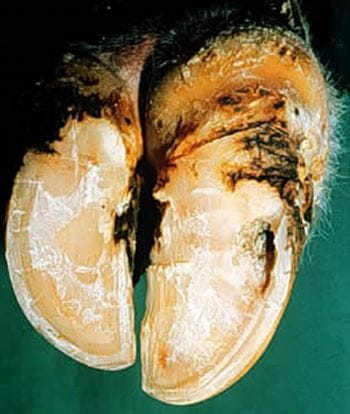 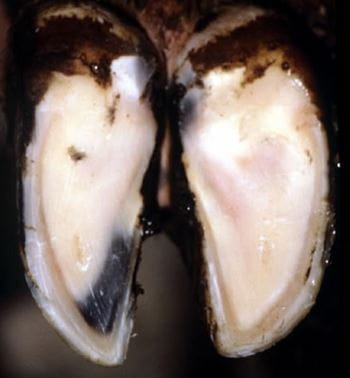 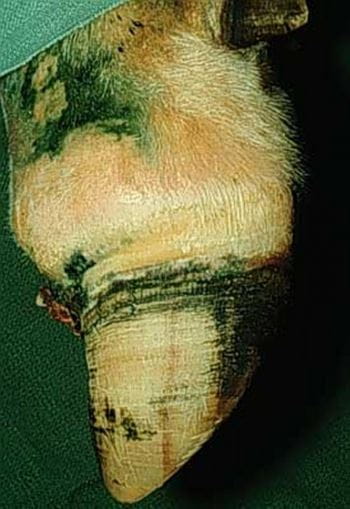 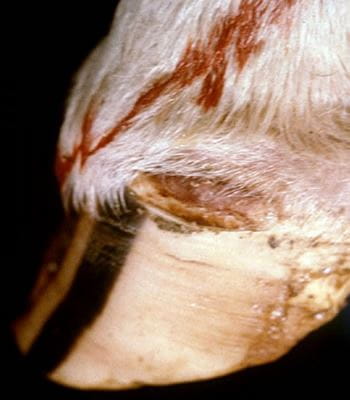 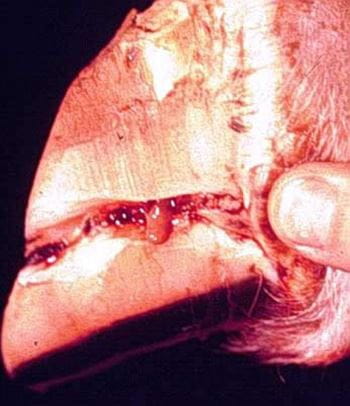 White line disease is almost as prevalent as sole ulcer and can be just as difficult to treat satisfactorily. Together with sole ulcers, white line disease commonly affects one or both lateral hind claws, predominantly in heavy, high-yielding dairy cattle kept under confined conditions. White line disease is characterized by hemorrhage into or separation (avulsion) of the abaxial wall, most commonly at the heel-sole junction. The corium becomes infected through this lesion.

White line disease is often referred to as also being present in the apical region. Technically, this is true, but this type of lesion will be described as a component of the toe necrosis syndrome (see Toe Necrosis Syndrome in Cattle Toe Necrosis Syndrome in Cattle The axial surface of the claw (left side of image) showing the axial groove, which is the most vulnerable area of the bovine claw wall. Radiograph of toe necrosis syndrome, distal phalanx necrosis... read more 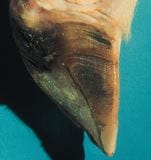 The affected cow may adduct its hindlimb(s). The abaxial wall may seem a little longer than normal, and occasionally there may be slight swelling and erythema of the coronary band above the heels.

The lateral claw of the hind foot (often both) is usually involved. If bilateral, the disease may remain unnoticed until lameness is more pronounced in one limb than the other. Because the outer hind claw is affected, the limb is swung away from the body during each stride. The cow may stand with the medial claw bearing weight. White line separation without complications is frequently seen at claw trimming. The degree of pain and lameness depends on the rate of development and extent of the subsolar abscess. Routine examination of the sole must include the complete exploration of the abaxial white line region. Black marks must be explored with the tip of a hoof knife as potential sites for track formation. Discharge of pus from the skin/horn junction above the abaxial wall is always reason to suspect a white line lesion. In these cases, the white line must always be examined very carefully.

The lamellar/laminar arrangement is longest behind the wall on the dorsal side of the hoof. This arrangement gets shorter toward the heel and more or less disappears at the abaxial groove. That is not to say that the collagenous fibers cease to exist in the other regions of the dermis; it can be postulated that adhesion between wall and corium could be less intense. At the same time, beneath the bulbar region is the structure known as the digital cushion. During locomotion, the digital cushion is compressed and expands toward the abaxial wall. Thus, this region is not only structurally weaker than more dorsal areas but is also subjected to a different set of pressure and mechanical stresses. The white line is composed of very soft horn, which fills the spaces between the lamella at the most distal extremity of the wall. It is postulated that stretching of collagen fibers, combined with sinking of the pedal bone, accounts for the hemorrhage into the white line so frequently seen.

Solid foreign bodies may lodge in the softened, widened white zone. They may push through to the corium beneath and introduce infection; however, the presence of a foreign body is not essential for the lesion to develop.

There are three possible sequelae of localized infection: 1) a localized abscess may develop; 2) infection may be forced proximally to form a track that may discharge at the coronary band; and 3) the infected track may, as it forces its way proximally, infect other structures, depending on the site of the initial infection. An anterior track can infect the distal interphalangeal joint directly. Tracks forming closer to the heel are likely to cause infection of the bursa of the deep flexor tendon. Invariably, the bursa ruptures into the retroarticular space, and an abscess develops in this location. Infection of the distal interphalangeal joint and the tendon sheath of the deep flexor tendon may follow. Necrosis and avulsion of the insertion of the deep flexor tendon into the distal phalanx are frequent complications. These cases are easily detected as the apex of the pedal bone unrestricted by the flexor tendon tips up.

Swelling of the heel bulb represents the most advanced form of white line disease; it is frequently misdiagnosed as footrot (often presented as a case of footrot resistant to treatment). Footrot causes the whole foot to swell evenly to the fetlock; in contrast, a retroarticular abscess leads to enlargement of only one heel bulb.

During a claw examination, any black mark in the white line must be cut out until healthy horn is exposed. For a local abscess, removal of an elliptical segment of the wall adjacent to the lesion aids free drainage by providing a self-cleansing abaxial opening. Cream-colored pus may indicate a corporeal response to tissues tearing as collagen fibers stretch and the pedal bone sinks. In contrast, if the pus is black, it is likely that infection has penetrated from the outside.