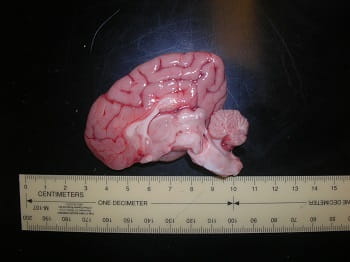 Arnold–Chiari malformation is a complex malformation of the caudal brain stem and cerebellum and typically consists of herniation of cerebellar tissue through the foramen magnum into the cervical spinal canal. It may be associated with spina bifida, hydrocephalus, or meningomyelocele. It is rare in domestic animals, and the cause is unknown. (A more common variation of this disease is recognized in dogs and appears to be inherited, but this has not yet been proven.) In calves, it may be seen with bilateral elongation and extension of the occipital lobes.

Cerebellar hypoplasia has been described in many species. In utero viral infection (bovine viral diarrhea Bovine Viral Diarrhea and Mucosal Disease Complex Bovine viral diarrhea/mucosal disease is a pestivirus infection of cattle and other ruminants. Infection leads to immunosuppression and can cause signs in multiple body systems in addition to... read more , bluetongue Bluetongue read more virus , and swine fever Classical Swine Fever read more virus during midgestation is the most common cause. Cerebellar lesions may also be seen with bovine fetuses infected with Akabane or Wesselsbron viruses. Clinical or subclinical hydranencephaly and arthrogryposis may accompany the cerebellar disease. The pathologic features include destruction or loss of one or more layers of the cerebellar cortex, particularly the granule and Purkinje cell layers. Prophylactic vaccination of the dam before breeding can prevent the problem. A hereditary cerebellar hypoplasia/dysplasia is seen in Hereford, Shorthorn, Ayrshire, and Angus calves. Cerebellar hypoplasia is present at birth and is nonprogressive, in distinction to the abiotrophies.

Cerebellar abiotrophies have been reported in many species. In abiotrophies, the cerebellar development proceeds normally, and the animal remains unaffected for a period of months or even years before cerebellar neurons begin to die off prematurely. This is in contrast to the cerebellar hypoplasias, in which developing cerebellar germinal cells and neurons are destroyed in utero. In Aberdeen-Angus calves, clinical signs of abiotrophy start early and are accompanied initially by seizures. In Arabian foals and Swedish Gottland ponies, the onset of signs is from birth to 9 months; in Yorkshire and Large White piglets, 1–3 months; in Holstein calves, 3–8 months; and in Merino sheep, 3–6 years.

Most abiotrophies are probably inherited (eg, recessive inheritance for affected Hereford cattle and Welsh Mountain and Corriedale sheep), and an autosomal recessive mutation on ECA2 has been identified in Arabian foals, but the specific gene affected has not been confirmed. Toxic causes should be ruled out and include locoweed, methylmercury, and exposure to organophosphates Organophosphates (Toxicity) The organophosphates (OPs) are derivatives of phosphoric or phosphonic acid. OPs have replaced the banned organochlorine compounds and are a major cause of animal poisoning. They vary greatly... read more in utero. Use of trichlorfon during pregnancy can cause a congenital tremor in piglets due to both cerebellar hypoplasia and hypomyelination.

Hypomyelinogenesis congenita, in which myelination is delayed throughout the CNS, can resemble cerebellar disease due to the severe head and body tremor that usually develops. In contrast to pure cerebellar disease, a persistent fine tremor at rest is usually present as well as a marked intention tremor. Newborn lambs, piglets, and occasionally calves are affected. The condition can be associated with in utero infection by viruses such as the virus of Border disease Border Disease Border disease is observed in young ruminants exposed to border disease virus during gestation. Surviving lambs demonstrate failure to thrive, a long hair coat, and tremors, giving rise to the... read more or swine fever virus Classical Swine Fever read more or exposure to trichlorfon Trichlorfon: The organophosphates (OPs) are derivatives of phosphoric or phosphonic acid. OPs have replaced the banned organochlorine compounds and are a major cause of animal poisoning. They vary greatly... read more . Affected lambs are often called “hairy shakers.” The condition is inherited in Saddleback and Landrace pigs and in Jersey and Shorthorn cattle. Signs are usually nonprogressive or may resolve completely if myelination has only been delayed.

Swayback or enzootic ataxia is largely due to copper deficiency, although there may be a familial predisposition. Hypomyelinogenesis can occur in utero and cause obtundation, blindness/deafness, falling or lying prostrate, and head tremor in lambs. The condition can be prevented by treating affected ewes in pregnancy. Kids, piglets, and perhaps calves may also be affected.

Congenital quiver is an autosomal recessive inherited disease affecting chickens, in which there is a continuous tremor. Affected chicks show a rapid tremor, whereas adults are variable from mild to severe. Females may be productive, but males are essentially sterile. Cerebellar lesions include loss of Purkinje cells, and perivascular cuffing occurs in white matter throughout the nervous system.

Cerebellar hypoplasia is seen in kittens after in utero infection with feline panleukopenia Feline Panleukopenia read more virus. The condition is nonprogressive, and affected cats may make suitable pets. Diagnosis can be obtained antemortem using MRI. Concomitant hydrocephalus or hydranencephaly may also be seen. Cerebellar hypoplasia has also been reported in Chow Chows and is seen in association with lissencephaly in Irish Setters and Wirehaired Fox Terriers.

A selective hypoplasia of the cerebellar vermis is also seen in dogs, and when combined with hydrocephalus and cyst-like dilatation of the fourth ventricle, the condition has been termed the Dandy-Walker syndrome, which may have a familial basis. An autosomal recessive deletion mutation in the very low density lipoprotein receptor (VLDLR) gene in Eurasier dogs has been identified. The cerebellar vermis may be partially or completely absent. Clinical signs are typical of a cerebellar disorder and include tremors, ataxia, and hypermetria. Occasionally, signs of head tilt and circling may also be present. Toy Fox Terrier dogs are predisposed to the Dandy-Walker form.

Cerebellar abiotrophies have been described in a number of breeds of dogs. In Samoyeds and Beagles, the signs are apparent at the onset of ambulation; in Australian Kelpies, Rough-coated Collies, Border Collies, and Kerry Blue Terriers, the clinical signs are seen in puppies from 4–16 weeks of age; in Brittany Spaniels, Old English Sheepdogs, and Gordon Setters, the signs appear in young or mature adults. Autosomal recessive mutations have been identified in several breeds, including the Hungarian Vizsla (SNX14 mutation), and Finnish Hound (SEL1L mutation). Clinical signs include progressive cerebellar ataxia, intention tremor, hypermetria, and possible loss of menace response due to cerebellar involvement. Postural reactions remain normal as with any pure cerebellar disease; however, affected animals may be incoordinated when placing paws. Clinical signs can be differentiated from cerebellar hypoplasia, above, by the onset. Hypoplasia is present since birth (apparent at time of ambulation) and nonprogressive, whereas animals with abiotrophies are born normal and progress after onset.

Neuraxonal dystrophy is described in both cats and dogs but primarily in Rottweilers (autosomal recessive inheritance of a mutation in the VPS11 gene in Rottweilers, and the PLA2G6 gene in Papillons). In Rottweilers, onset is between 3–24 months of age, and the disorder progresses slowly over several years. Signs include cerebellar dysfunction and dysmetria in all four limbs but with preservation of paw position sense, which should distinguish it from leukoencephalomyelopathy Also see Diseases of the Spinal Column and Cord. Spinal muscular atrophy is an autosomal recessive inherited disorder of Brown Swiss calves. A mutation in the FVT1 gene is suspected. The first... read more

and from advanced motor neuron disease in the same breed. Collies in Australia and New Zealand develop similar clinical signs at 2–4 months of age. There is also early onset in Papillons and Chihuahuas and in cats (autosomal recessive in domestic tricolored cats). Axonal spheroids, often in specific regions of the brain and spinal cord, are the characteristic pathologic finding of these conditions.

Bandera's neonatal ataxia (Bandera's syndrome) is an autosomal recessive cerebellar ataxia identified in Coton de Tulear dogs, which manifests as a cerebellar ataxia from the time of birth. It is nonprogressive, but affected animals are never able to walk. The cerebellum is anatomically normal, and signs are a result of a mutation that affects neurotransmitter function. A DNA test is available for this disease in the Coton de Tulear.

Congenital hypomyelination is seen as a familial/inherited disorder in Springer Spaniels, Chow Chows, Weimaraners (for whom a mutation in the FNIP2 gene has been identified), and Bernese Mountain Dogs, usually with signs developing around 2–8 weeks of age. In the latter three breeds, it is often termed dysmyelination because the clinical signs of whole body tremor usually resolve spontaneously with time. The disorder is rare in cats. The diagnosis can be confirmed using MRI. (Also see Demyelinating Disorders Demyelinating Disorders read more .)

Caudal occipital malformation syndrome(Chiari-like malformation) and subsequent syringohydromyelia has been commonly reported in Cavalier King Charles Spaniels, the American Brussels Griffon, and less commonly in other small-breed dogs. Genome-wide associations have not yet identified a specific genetic mutation, although candidate genes are being evaluated. The malformation is comparable to the Chiari type I malformation described in people and includes a congenital malformation of the occipital bone, resulting in a crowded caudal fossa and cerebellar herniation at the foramen magnum. The subsequent disruption of CSF flow results in formation of syringomyelia. An estimated 48% of asymptomatic Cavalier King Charles Spaniels have the caudal fossa malformation.

Although the malformation is present at birth, clinical signs often do not appear until later in life. Clinical signs vary but commonly include paresthesias (eg, face rubbing, phantom scratching of the back of the head), ataxia, and weakness from syringomyelia. Diagnosis is achieved via MRI scan of the brain and entire spinal cord, because syringohydromyelia may appear anywhere throughout the spinal cord and is not necessarily continuous. Medical management is often not curative but can be attempted with gabapentin (10 mg/kg, PO, three times daily) or pregabalin (5 mg/g, PO, twice daily) for paresthesias, omeprazole (0.7 mg/kg/day, PO) for reduction of CSF production, and other analgesics for pain management. Surgical decompression via caudal occipital craniectomy is preferred as definitive treatment; however, recurrence rates of 25%–47% have been reported.