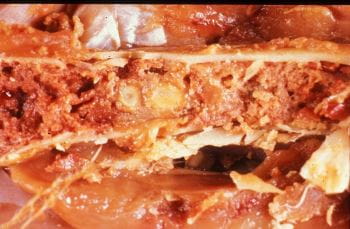 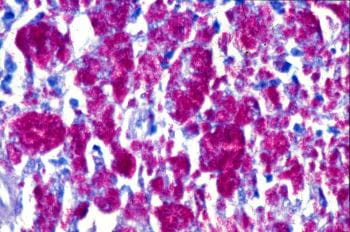 Intestinal lamina propria, acid fast bacilli
Tuberculosis, caused by Mycobacterium avium, can affect all birds, although susceptibility varies by species. Infection is chronic, leading to emaciation, decreased egg production, granulomas in multiple tissues, and death. Diagnosis is best made through necropsy demonstration of the bacteria in tissue samples. Because of the risk of creating drug-resistant strains, treatment is not recommended. Contaminated premises should not be used to raise poultry. Although M avium can infect humans, serovars found in birds and people are typically different. Nonetheless, precautions to avoid human exposure should be taken with infected birds.

Poultry tuberculosis is predominately caused by Mycobacterium avium subsp. avium (M avium). Tuberculosis is a chronic disease occasionally seen in small poultry flocks, gamebirds (pheasants, quail, and partridges), and rarely in commercial poultry. With the advent of free-range commercial flocks, the incidence may increase. The disease is also seen in captive pet birds. In poultry, the entire flock is usually affected, but the disease presents to the practitioner as an individually affected live or dead bird. Birds that die from the disease are extremely emaciated, with dramatic loss of muscle and no body fat. Live birds within the flock, when picked up, will feel much lighter than non-affected birds.

All avian species can be infected with M avium. Chickens, pheasants, and partridges are highly susceptible to infection, whereas turkeys are less susceptible. Waterfowl (duck and geese) appear to be relatively resistant. M avium is also a cause of disease in swine as well as other mammals. Tuberculosis in avian species occurs worldwide.

Tuberculosis in birds is predominantly caused by Mycobacterium avium subsp. avium serovars 1, 2, and 3. However, early literature has reported wild-caught psittacines as being infected with M tuberculosis presumably infected by their captors. More recent literature has described M genavense infection in pet birds and zoo-held avian collections. Avian infections with M bovis and M fortuitum have also been reported. The most common route of infection is oral. Once inside an animal, bacteria replicate within macrophages, causing submucosal and serosal granulomas of the intestines. The granulomas ulcerate, releasing the bacteria into the intestinal lumen, which is then shed in feces. Fecal shed causes contamination of the environment. The bacteria may enter the blood stream, where they are transported to the liver, spleen, and bone, resulting in granulomas in those organs.

M avium infection is transmitted through contact with contaminated environments. The larger the infected population and the longer they remain on those premises, the higher the bacterial contamination level in the environment. M avium is typically ingested, although infection may occur via aerosol. M avium may persist in soil for many years. It is therefore important not to use contaminated premises to raise poultry, swine, or other susceptible species.

Decreased egg production or diminished weight gain may develop in affected flocks. In small flocks, this is often missed until a few birds die. When walking through a flock, emaciated birds will lag behind healthy birds. When they are picked up, they will feel lighter than unaffected birds. The carcasses of dead birds will reveal extreme emaciation, with no fat reserves, dramatic loss of muscle, and prominent bone protuberances. Lesions consist of white, firm masses of various sizes in the liver, spleen, and bone marrow. The intestinal wall is thickened and pale, and there may be serosal masses.

Antemortem tests are not reliable, with intradermal injections and serologic tests providing false positive results. Fecal PCR can be performed, but shedding of M avium in the feces may be intermittent. Diagnosis is best made following necropsy. Acid-fast stains of crushed granulomas or upon histology of affected tissues should reveal the presence of acid-fast bacilli. In avian tuberculosis, in contrast to some mammalian tubercle infections, acid-fast bacilli are numerous. Culture using specific media may confirm the diagnosis but takes much longer than other bacteria. PCR and whole gene sequencing may be warranted in cases of human exposure. Other causes of white masses in liver and spleen include infection with salmonella Salmonelloses read more , staphylococcus Staphylococcosis read more , and Escherichia coli Colibacillosis read more (Hjärre’s disease), and Marek disease Marek's Disease in Poultry Marek disease is a highly contagious viral disease of poultry characterized by T-cell lymphomas and peripheral nerve enlargement. Standard criteria used for diagnosis include history, clinical... read more

, lymphoid leukosis Lymphoid Leukosis in Poultry Lymphoid leukosis is a neoplastic disease of poultry caused by avian leukosis virus. The disease is characterized by B-cell lymphoma, occurring in chickens approximately 16 weeks of age and... read more

Because avian tuberculosis is treated with the same drugs used to treat human infection, treatment is not recommended for fear of producing resistant strains. Control includes prevention, so previously contaminated premises should not be used to raise poultry. Infected flocks should be depopulated so as not to perpetuate flock infection nor continue to contaminate the environment. Using all in/all out management practices, in which birds of only one age are kept and when production is completed they are depopulated, may help prevent infection.

Although M avium is becoming the predominant tubercle infection in humans, based on the decline of M tuberculosis, the serovars of human M avium infection are different from those of the avian species. The serovars of humans are more closely related to those of swine than those of birds. Nevertheless, special precautions should be exercised when dealing with mycobacterium-infected birds.

Role of the Veterinarian in Public Health/One Health