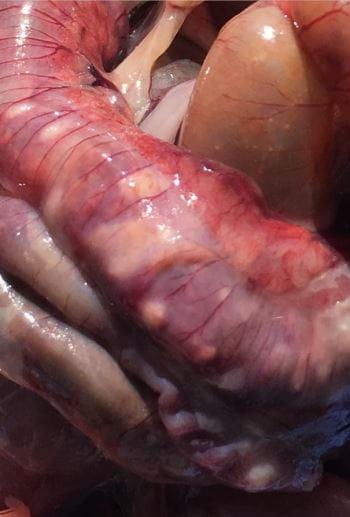 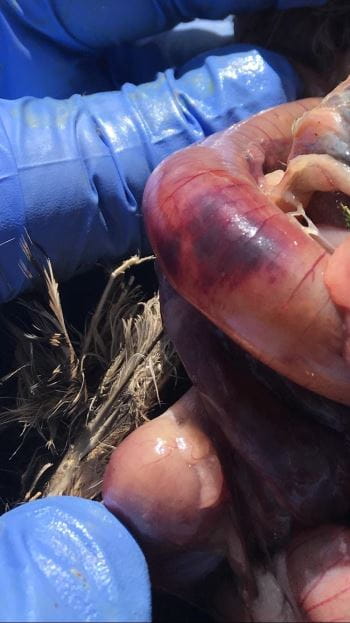 Ulcerative enteritis lesions, Coturnix Quail
Ulcerative enteritis is caused by infection with Clostridium colinum. It primarily affects bobwhite quail, but several other bird species can also be infected. Clinical signs include sudden death and hemorrhagic enteritis but are less severe in chickens and game birds other than quail. Diagnosis is by histopathology, bacterial culture, and PCR. Streptomycin and furazolidone are effective treatments, and bacitracin in feed can be used as a preventive.

Clostridium colinum is the etiologic agent of ulcerative enteritis. It is an anaerobic, fastidious to culture, gram-positive, spore-forming, slightly curved rod, ~1 × 3–4 mcm wide, with subterminal, oval spores. In chickens, the disease is a complex that is linked to stress, coccidiosis, infectious bursal disease, and other predisposing factors. To induce experimental disease in bobwhite quail, >106 viable bacterial cells must be administered PO; chickens inoculated at the same levels are not affected.

Birds that develop chronic ulcerative enteritis or that have recovered from the disease remain carriers. Infection can be introduced by flies feeding on contaminated fecal material or by recovered carrier birds. Infected birds shed the bacterium in their droppings. Bobwhite quail are the most susceptible to this highly contagious disease. Most cases are reported in captive populations of bobwhite quail, suggesting that management plays a role in the incidence. C colinum spores can survive in the premises for months. Clostridium spp have been isolated from water samples obtained from drinker pipes in which biofilm and mineral deposits were present.

After oral infection, the bacterium adheres to the intestinal villi, producing enteritis and ulcers in portions of the small intestine and upper large intestine. Bacilli migrate to the liver via portal circulation, producing necrotic foci that later coalesce into extensive hepatic necrosis. Infarcts of the spleen are common. Stained smears of the lesions reveal the rod-shaped C colinum microorganism. Although toxigenicity tests in mice have been negative, the role of an in situ-produced toxin in the pathogenesis has been suggested but not demonstrated.

In susceptible bobwhite quail, sudden death from ulcerative enteritis occurs without signs or weight loss and with up to 100% mortality in just 2–3 days. Acute lesions include hemorrhagic enteritis of the duodenum. In chickens and other game birds, the course of the disease is less severe and is accompanied by anorexia. Signs are similar to those seen in coccidiosis: depressed, listless birds with humped backs, ruffled feathers, diarrhea, and sometimes bloody or watery white droppings, especially in quail in the prolonged course. Chickens recover within 2–3 weeks, and mortality rarely exceeds 10%.

In early disease stages, the most common lesions include small, round ulcers surrounded by hemorrhages in the small intestine, ceca, and upper large intestine. Small ulcers later coalesce to form larger, sometimes perforating ulcers, producing local or diffuse peritonitis. The presence of blood in the gut resembles coccidiosis. Characteristic yellow to gray necrotic foci are the predominant lesions in the hepatic parenchyma. Splenomegaly with hemorrhages and necrotic areas may be present.

Gross postmortem lesions, including intestinal ulcerations and yellow to gray necrotizing lesions in the liver, assist in diagnosis of ulcerative enteritis. C colinum can be seen in gram-stained smears of the liver and intestinal lesions. In bacteremic birds, the microorganism can also be found in blood and spleen smears. In chickens, differentiating ulcerative enteritis from coccidiosis Coccidiosis read more may be difficult, because both diseases may be present simultaneously. Necrotic enteritis Necrotic Enteritis read more and histomoniasis Histomoniasis read more may also present a diagnostic problem, but the hepatic lesions of ulcerative enteritis help differentiate it from these diseases. C colinum can be isolated from liver samples cultured in strict anaerobic conditions in prereduced blood glucose-yeast horse plasma medium. A fluorescent antibody test has been used to accurately diagnose ulcerative enteritis. PCR assay has also been reported as an effective diagnostic test.

Bacitracin in the feed at 200 g/ton is used for prevention of ulcerative enteritis in quail. Streptomycin (0.006%) and furazolidone (0.02%) in the feed are effective to treat the disease. Prevention must start with good management practices (eg, avoiding the introduction of new birds into existing flocks). High population density is a predisposing factor. The use of cages is recommended in quail breeding. Sick and dead birds should be removed immediately. Total cleanup between flocks, pest control in and around the premises, and periodic treatment of watering systems with innocuous chemicals that dissolve mineral and or biofilm build-up are good preventive measures.