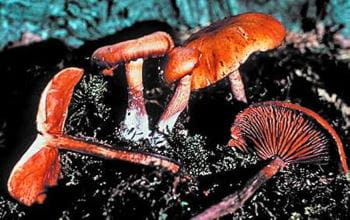 These mushroom species account for >95% of the reported mushroom-induced deaths. They are common throughout North America and are associated with oaks and birch trees.

Amanita phalloides and A virosa have olive to green caps with veil patches, gills that are unattached to the stalk, a white spore print, and stalks with a ring (often but not always) and a cup (volva) or remnants at the base. The features of Lepiota helveola are similar to those of Amanita spp but without volva; they have scaly caps with a knob in the center and stalks with a movable ring. Galerina autumnalis (autumn galerina), G venenata, and Conocybe filaris have brownish, tacky caps with yellowish gills becoming rust and a ring on their brownish stalks. They have no volva, and their spore print is brown to rust-brown. These species are abundant on well-decayed coniferous and deciduous logs throughout North America.

Toxin present in these mushrooms include cyclopeptide amatoxins (bicyclic octapeptides), phallotoxins, and virotoxins (bicyclic heptapeptides). Amatoxins (α and β amanitin derivatives) are the most potent; they are not found in all Amanita spp. An estimated reported lethal dose is 0.1 mg/kg (equivalent to the concentrations in one cap of A phalloides) across animal species. Whereas the amatoxins are reported to be well absorbed orally, phallotoxins and virotoxins are not. Amanitins are not protein bound and are excreted in urine (80%–90%), feces, and bile (7%). Amatoxins bind to nuclear RNA polymerase-11 (transcription phase), thus preventing the formation of phosphodiesterase bonds and subsequent RNA, DNA, and protein synthesis. High-protein synthesis cells are most sensitive. Amatoxins are primarily liver toxins, but they also affect many organ systems, resulting in hypoglycemia, blood clotting defects, thyroid/parathyroid functional anomalies, renal failure, and intestinal damage (enterohepatic recirculation of the toxin).

Signs can be characterized in four phases: 1) latent (6–12 hr after ingestion), in which the animal shows no clinical signs; 2) GI signs (as long as 24 hr after ingestion); 3) remission (as long as 72 hr after ingestion), in which the animal appears to have recovered; and 4) hepatic/renal (3–6 days after ingestion), leading to recovery or death throughout the next 7–14 days. The reported long latent phase is of diagnostic importance. The GI phase, indicated by vomiting, abdominal discomfort, hepatitis, and pancreatitis follows and signals initial hepatic, hematologic, cardiovascular, endocrine, CNS, and renal changes. The remission phase follows, only to enter a fulminant hepatic/renal phase, indicated by icterus, hypoglycemia, and coma, 3–4 days after ingestion. Recovery or death (>50%) from hepatic and/or renal failure occurs 7–14 days after mushroom ingestion.

Mushroom identification characteristics, coupled with consistent clinical signs as stated above, is diagnostic. Meixner test results (time taken, and color intensity of suspected mushroom specimen—fresh, vomited fragments) would be diagnostic. During the GI phase, animals should be monitored for decreased serum thyroxine levels, hypoglycemia, and/or increased insulin, calcitonin, and parathyroid levels. Routine blood and serum chemistry profiles are unremarkable until liver/kidney damage. Because the toxin is primarily hepatotoxic, changes in clotting factor V, fibrinogen, and kidney and liver profiles would also be helpful. Amanitins can be detected in urine from animals not showing clinical signs. They are also detectable in liver and kidney specimens as long as 22 days after ingestion.

There are no specific antidotes. Silibinin (not FDA approved), penicillin G (high levels), combined silibinin/penicillin, cimetidine, N-acetylcysteine, or vitamin C therapies have been used with some success in people and could therefore be tried, although animal study data are not readily available. Hypoglycemia remains an adverse effect with or without treatment. Supportive care (IV fluids, dextrose, and antibiotics) counters the effects of severe liver and kidney damage. Early institution of treatment is essential to save the animal; the prognosis is poor after hepatic/renal pathology. Activated charcoal (1 g/kg with cathartic) during the first 24 hr after ingestion absorbs amanitin undergoing enterohepatic recirculation and thus may be helpful.

These mushrooms have a non-gilled, yellow-brown to dark-red, deeply wrinkled, honeycomb (unlike true morels that are hallowed and not chambered), saddle-shaped cap on a short stalk. They are found on the ground under conifers throughout North America. The toxin involved is the hydrazone gyromitrin, which on ingestion is hydrolyzed to N-methyl-N-formylhydrazine (depletes hepatic cytochrome P-450) and monomethylhydrazine (inhibitor of the coenzyme pyridoxal phosphate and γ-aminobutyric acid in the CNS 6–12 hr after ingestion. The concentration of gyromitrin varies with environmental conditions.

Vomiting, watery diarrhea, abdominal discomfort, convulsions, and coma may be noted 6–24 hr after ingestion of a toxic dose. Methemoglobinemia and hemolytic anemia, hepatitis, jaundice, nephritis, and death develop some time later. Death appears to be due to hepatorenal failure.

Activated charcoal (1 g/kg) may be helpful if given early after ingestion. IV fluids should be given as needed. IV pyridoxine controls neurologic signs, and methylene blue can be given in cyanotic and methemoglobin cases. Pyridoxine-induced peripheral neuropathy from administering high doses should be avoided. For the induced hepatic encephalopathy, supportive therapy is essential. In addition to monitoring methemoglobin levels, hepatic and renal functions should also be monitored.

Overview of Management of Reproduction: Cattle