Actinomycosis in Cattle, Swine, and Other Animals

Last review/revision Jul 2020 | Modified Oct 2022
Topic Resources
Actinomyces are gram-positive, anaerobic bacteria that cause disease primarily in cattle and swine but also occasionally in other animals. Lumpy jaw is a localized, chronic, progressive, granulomatous abscess that most frequently involves the mandible, the maxillae, or other bony tissues in the head. Presumptive diagnosis is often based on clinical signs. The diagnosis can be confirmed by culture of the organism from the lesion; however, this requires anaerobic conditions and is frequently negative. The goal of treatment for actinomycosis is to kill the bacteria and stop the spread of the lesion.

Members of the genus Actinomycesare gram-positive, anaerobic, non-acid-fast rods, many of which are filamentous or branching. Branches are < 1 mcm in diameter, as opposed to fungal filaments, which are >1 mcm in diameter. Although they are normal flora of the oral and nasopharyngeal membranes, several species are associated with diseases in animals.

A bovis is the etiologic agent of lumpy jaw in cattle. It has also been isolated from nodular abscesses in the lungs of cattle and infrequently from infections in sheep, pigs, dogs, and other mammals, including chronic fistulous withers Bursitis in Large Animals Bursitis is an inflammatory reaction within a bursa. The causes can range from overuse, mild trauma, or severe trauma to sepsis. Bursitis in its various forms is more common and a more important... read more 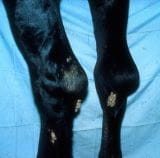 and chronic poll evil in horses. Lumpy jaw is a localized, chronic, progressive, granulomatous abscess that most frequently involves the mandible, the maxillae, or other bony tissues in the head.

A actinoides is occasionally found as a secondary invader in enzootic pneumonia of calves and seminal vasculitis in bulls. A israelii is primarily associated with chronic granulomatous infections in humans but has also been isolated rarely from pyogranulomatous lesions in pigs and cattle. Treatment involves surgical debridement and administration of penicillin. A naeslundii has been isolated from suppurative infections in several animal species, the most common being aborted porcine fetuses.

Clinical Findings of Actinomycosis in Cattle, Swine, and Other Animals

A bovis is part of the normal oral flora of ruminants. Disease is seen when A bovis is introduced to underlying soft tissue via penetrating wounds of the oral mucosa from wire or coarse hay or sticks. Involvement of adjacent bone frequently results in facial distortion, loose teeth (making chewing difficult), and dyspnea from swelling into the nasal cavity. Any part of the bovine can be affected, but the alveoli around the roots of the cheek teeth are frequently involved. The primary lesion appears as a slow-growing, firm mass that is attached to, or is part of, the mandible. In some cases, ulceration with or without fistulous tracts form, and drainage of purulent exudate may occur.

A suis has classically caused pyogranulomatous porcine mastitis, characterized by small abscesses containing thick, yellow pus surrounded by a wide zone of dense connective tissue. Yellow “sulfur granules” may be scattered throughout the pus, as in A bovis in cattle. Chronic, deep-seated abscesses may fistulate. Sows may also develop ventral subcutaneous granulomatous lesions, and occasional pyogranulomatous infections develop in lungs, spleen, kidneys, and other organs. More recently it was discovered that A suis isolates are likely more correctly classified as A denticolens, which has also been reported to cause mandibular lymphadenopathy in horses with fever, nasal discharge, and depression. Thus A denticolens is a pathogen in a broad range of animals.

A hordeovulneris is a rare cause of canine actinomycosis that can present with either localized abscesses or systemic infections, such as pyogranulomatous pleuritis, peritonitis Peritonitis in Animals Peritonitis is the inflammation of the serous membranes of the peritoneal cavity. It may be primary or caused by infectious or noninfectious agents. Signs include localized pain, depression... read more , visceral abscesses, and septic arthritis. A common predisposing factor is the presence of tissue-migrating foxtail grass (Hordeum spp) particles, and the primary route of infection appears to be via inhalation of the bacteria.

A viscosus causes cutaneous actinomycosis in dogs, which appears as localized subcutaneous abscesses. These usually occur secondary to perforating injuries caused by bite wounds or foreign bodies. The most common sites for abscesses are the head, neck, thorax, and abdomen. Pneumonia and pyothorax have also been described with A viscosus, along with rare cases of pyogranulomatous meningoencephalitis.

Diagnosis of Actinomycosis in Cattle, Swine, and Other Animals

Presumptive diagnosis of actinomycosis is often based on clinical signs. The diagnosis can be confirmed by culture of the organism from the lesion, but this requires anaerobic conditions and is frequently negative. Cytology is useful because a Gram stain of purulent material will reveal gram-positive, club-shaped rods and filaments (sulfur granules). Radiology of the head is also useful; the primary radiographic lesion consists of multiple central radiolucent areas of osteomyelitis surrounded by periosteal new bone and fibrous tissue. As a last resort, a biopsy sample can be taken with a trephine and submitted for histopathology. In canine actinomycosis, history and clinical signs may contribute to the diagnosis, but demonstration of the causative agent by Gram stain and bacteriologic culture is necessary for confirmation of etiology. With cutaneous actinomycosis, soft, grayish-white granules are frequently visible in the pus or exudate. Cytology (of pus or pleural fluid) is quite useful and will reveal gram-positive, filamentous organisms.

Treatment of Actinomycosis in Cattle, Swine, and Other Animals

The goal of treatment for actinomycosis is to kill the bacteria and stop the spread of the lesion. However, the size of the hard mass will usually not regress significantly. Sodium iodide is the treatment of choice in ruminant actinomycosis. Intravenous sodium iodide (70 mg/kg of a 10%–20% solution) is given once and then repeated several times at 7–10 day intervals. If clinical signs of iodine toxicity develop (including dandruff, diarrhea, anorexia, coughing, and excessive lacrimation), iodine administration should be discontinued or treatments given at greater intervals. Sodium iodide has been shown to be safe for use in pregnant cows and presents little risk of abortion. Concurrent administration of antimicrobials, including penicillin, florfenicol, or oxytetracycline, is recommended.

Treatment of A suis (A denticolens) infections in pigs is rarely successful, primarily due to the inability of an antibacterial agent to penetrate the infected tissue. Infected tissue may be surgically removed to salvage sows for slaughter.

In dogs with A hordeovulneris, treatment includes surgical debridement and/or longterm treatment with penicillin, cephalosporins or sulfonamides. Pyothorax is frequently seen in canine actinomycosis, and requires repeated drainage of the chest in addition to antimicrobial therapy. Treatment of pyothorax due to A viscosus with penicillin, sulfonamides, or cephalosporins may be successful if begun early in the clinical course. A successful outcome is more likely with cutaneous infections, which should also be treated with the same antimicrobials.

Prevention of Actinomycosis in Cattle, Swine, and Other Animals

Because A bovis is part of the normal oral flora in ruminants, control focuses on the avoiding of coarse, stemmy feeds or feeds with plant awns that might damage the mucosal epithelium. When multiple cases occur in a herd, it is not from the contagious nature of the pathogen but from the widespread exposure to a risk factor (ie, coarse feed).