Equine and bovine laminitis are distinctly different. Although acute laminitis occurs in both species and can be caused by grain overload, other etiologies can affect the equine laminae. A major difference between the two species is anatomic, in that the lamellar/laminar surface of the equine hoof is considerably more extensive than that of the cow. 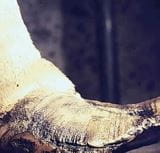 Subclinical laminitis is almost certainly an incorrect descriptor for the disorder(s) observed. The condition has been referred to as claw horn disruption, but use of this term is misleading.

Subclinical laminitis is of considerable economic importance to the dairy industry, because it predisposes mature animals to sole ulcer, white line disease, or the toe necrosis syndrome. It has been seen in most developed countries and is of greatest concern in high-production, intensively managed herds.

There are no definitive clinical signs of subclinical laminitis. However, in any group of cows presented with the same set of insults, a few cows may show slight signs of the subacute form of the disorder. Some cows with subacute laminitis may walk in a deliberate, careful manner with the legs carried beneath the animal when walking. When standing, such animals tend to draw all four feet under the body. Erythema and edema (puffy foot) of the skin above the coronary band and around the dewclaws in freshly calved cows may indicate a transitory laminitis-like insult and that the cows are being introduced to concentrate too rapidly. Hoof testers may evoke some response.

Sole hemorrhages are an invariable clinical sign of clinical laminitis, but such hemorrhages due to trauma are more common; therefore, this sign must be interpreted carefully ( see Sole Hemorrhage in Cattle Sole Hemorrhage in Cattle Sole hemorrhage is by far the most common noninfectious lesion in lame cows. It is regarded as a typical sign of laminitis but is frequently overshadowed by bruising of the sole. Blood stains... read more ).

The etiology of subclinical laminitis in cattle is not understood. The classic hypothesis suggests that high levels of carbohydrate in the diet ( see Subacute Ruminal Acidosis in Cattle and Sheep Subacute Ruminal Acidosis in Cattle and Sheep Subacute ruminal acidosis is characterized by intermittent, self-correcting periods of low ruminal pH. Affected cows do not show clinical signs when ruminal pH is depressed. However, sequelae... read more ) invoke an increase of Streptococcus bovis and Lactobacillus spp, which induce a state of acidosis in the rumen. This causes gram-negative organisms to die and release vasoactive endotoxins. Rumenitis is frequently associated with ruminal acidosis. High levels of histamine in the blood have been found in the early stages of the disorder. It is probable that subacute ruminal acidosis is one key factor in development of laminitis, because managing subacute ruminal acidosis (SARA) helps control the incidence of subclinical laminitis.

Contemporary thinking is that as production levels increase, cows become more sensitive to risk factors. A risk factor in this case is any physical insult causing stress. This probably leads to the release of bioactive messengers into the bloodstream. One important risk factor is trauma; many clinicians are convinced that hard flooring is equal in importance to nutritional problems. Care must be taken when dry cows and heifers are introduced to concrete after being accustomed to soft flooring.

Although the release of biologic messengers into the bloodstream is known, identification of the agents that play a part in laminitis is ongoing. Epidermal growth factor (EGF) receptors are present in the basement membrane of the corium of the claw. EGF is liberated in large quantities from the GI tract when it is damaged (eg, rumenitis) and could be involved in the pathogenesis of laminitis. In addition to its mitogenic effect, EGF can inhibit the differentiation of keratinocytes in vitro. Inhibited differentiation of keratinocytes of the hoof matrix is a dominant morphologic feature in the early stages of laminitis. This supports the hypothesis that laminitic histopathologic changes result from an inadequate regulation of gelatinase activity, resulting in selective degradation of basement membrane components due to failure of the basement membrane–epidermis attachment.

More recent investigations have studied the role of matrix metalloproteinase (MMP) activity in the pathophysiology of laminitis. It is not known which endotoxins are involved in releasing MMPs. It is known that MMPs play some part in allowing collagen fiber supporting the distal phalanx to stretch. During the peripartum period, hormones such as relaxin are generated. Correct management of nutrition around calving is critical. In early calving heifers, it is possible growth hormones could have a complicating role.

Whatever the biologic messengers, they appear to affect two different types of tissues: the papillary or solear dermis and the collagen fibers of the laminae. This results in two distinctly different pathologies. The first is disruption of normal keratogenesis, and the second, abnormal MMP activity, results in sinkage and/or rotation of the digit.

The pathophysiologic process associated with compromised horn production starts when vasoactive toxins or other biologic agents reach the corium. Arteriovenous shunts may be paralyzed, pressure inside the claw rises, and the walls of the vessels are damaged. Blood or blood fluids escape and soak into the claw horn, staining it either pink or yellow. Hemorrhagic staining of the horn tubules of the sole give a “brush mark” appearance. Mural thrombi form, reducing blood flow and causing oxygen deprivation and an insufficient nutrient supply to the keratin-producing cells. Thrombus formation is a characteristic feature of laminitis. The resulting horn is soft and prone to damage, infection, and scar formation.

The second pathophysiologic process involves MMP release and stretching of the collagen fibers of the suspensory apparatus of the digit. Collagen fibers originate in horny corrugations (lamellae) on the inner surface of the hoof wall and insert into those areas of the distal phalanx that have no periosteum. Thus, the pedal bone is "suspended" from the wall of the hoof. The lamellae are arranged to increase the surface area from which the fibers originate. The vascular tissue and germinal layer, the laminae, are interleafed between the lamellae. In areas of the wall and sole where there are no lamellae, the tissues of the dermis are referred to as corium. Whether laminitis is truly an inflammatory process could be questionable.

Frequently, young animals appear to recover from laminitis. This may be because new blood vessels develop to form collateral circulation and take over the function of those that have been damaged. Nevertheless, each time an animal has a bout of laminitis, more scar tissue is formed and the animal is less able to recover from the next insult.

Treatment for subclinical laminitis is impractical, because diagnosis in an individual animal is not possible at the time of the causative insult(s).

Copyright © 2023 Merck & Co., Inc., Rahway, NJ, USA and its affiliates. All rights reserved.
Disorders of the Horn Capsule and Corium in Cattle