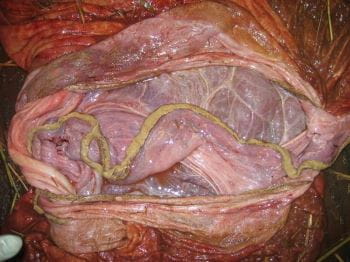 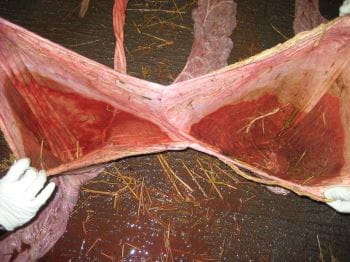 Placenta from a twin abortion, mare 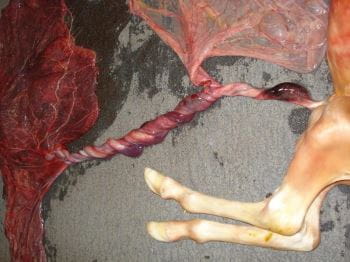 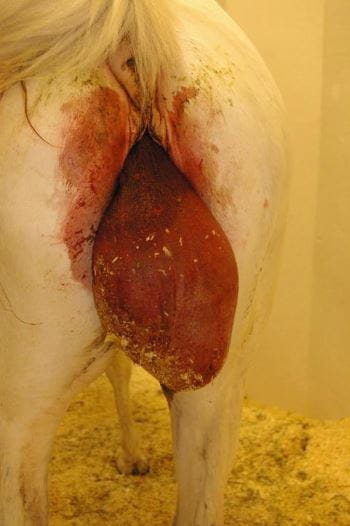 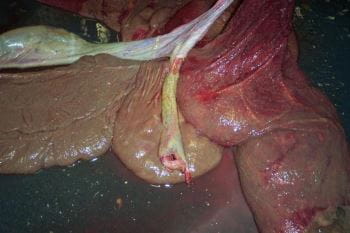 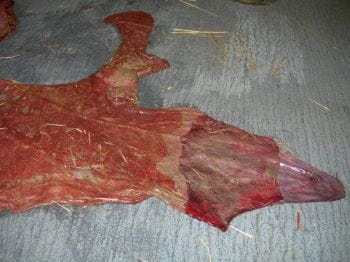 The most common noninfectious cause of abortion in horses is twinning. Most abortions related to twinning occur at 8–9 months of gestation and may be preceded by premature lactation. Placental insufficiency ultimately causes abortion of twins. Umbilical cord abnormalities, such as torsion due to abnormal length (>100 cm), are commonly diagnosed as a noninfectious cause of abortion, particularly in Thoroughbreds. Diagnosis of abortion due to cord torsion requires evidence of localized swelling or hemorrhage, because torsions occur in some normal births. Signs of fetal circulatory disturbances, such as subcutaneous edema, a swollen, soft liver, and microscopic mineralization of placental vessels, are also signs of umbilical cord obstruction. Various congenital fetal abnormalities have been reported in cases of noninfectious abortions.

Fescue Grass Toxicosis as a Cause of Abortion in Horses

Ingestion of fescue infected by the endophyte Epichloë coenophiala(formerly Neotyphodium coenophialum) causes prolonged gestation, agalactia, edema and premature separation of the placenta, and perinatal death. Abortion is rare but may occur in the last 2 months of pregnancy due to severe edema and premature placental separation. The placenta is thickened and edematous and does not rupture normally at the cervical star. The chorioallantois precedes the foal through the birth canal instead of remaining attached to the uterus (red bag), resulting in anoxia and death of the fetus. The source of the infected fescue Fescue Poisoning Fescue lameness, which resembles ergot poisoning, is believed to be caused by ergot alkaloids, especially ergovaline, produced by the endophyte fungus Neotyphodium coenophialum in tall fescue... read more can be pasture, hay, or bedding.)

Mare Reproductive Loss Syndrome as a Cause of Abortion in Horses

In spring of 2001, horse farms in Kentucky and neighboring states experienced an explosive outbreak of early abortions and late-term abortions, stillbirths, and weak foals that died within a few days. Simultaneously there was a large increase in fibrinous pericarditis and unilateral uveitis in horses of all ages and both sexes. Together these conditions became known as mare reproductive loss syndrome (MRLS). Analysis of records showed that MRLS had occurred in the area in earlier years. MRLS has since been diagnosed in other states, including New York and Florida. An abortion storm with similar clinical signs and risk factors has also been reported from Australia.

Most abortions occur at 40–80 days of gestation, with some losses occurring as late as 140 days. A few affected mares present colic, fever, and/or purulent vulvar discharge, but most remain clinically normal. Typically, the first sign is abortion or finding a fetus dead in utero by ultrasound. Late-term losses generally occur at 10 months of gestation to term, and the mare usually does not display signs of impending parturition.

Most fetuses are expelled within 2 days to 2 weeks of dying and are autolytic. Neutrophilic placentitis and metritis are usually present. Most mares rebred during the same breeding season do not become pregnant, but conception is usually normal during the next breeding season.

A variety of bacteria can be isolated from the fetuses, regardless of when they abort, but are not considered causative. Pasture exposure to eastern tent caterpillars (Malacosoma americanum) is an important risk factor, and both early and late-term abortions have been reproduced by oral administration of whole caterpillars or their exoskeletons but not their digestive tract. The mechanism causing abortion has not been confirmed. It has been proposed that an unidentified toxin associated with the exoskeleton of these caterpillars is involved, and that bacterial infections are secondary. Alternatively, caterpillar hairs (setae) may penetrate the oral or intestinal mucosa and carry bacteria, resulting in bacteremia with localization in the uterus and other organs. (The horses in the Australian outbreak were exposed to processionary caterpillars [Ochragaster lunifer]).

) as well as bacterial and fungal infections.

Bacterial placentitis is by far the most commonly diagnosed cause of abortion in many horse breeding areas. Placentitis is a significant cause of equine late-term abortion, premature delivery, and neonatal death.

Except for Leptospira spp and nocardioform infections, most cases of bacterial placentitis are ascending. Ascending placentitis is characterized by premature udder development, increased uteroplacental thickness at the level of the cervical star, and mucopurulent vaginal discharge. If placentitis is untreated, placental function is compromised and placental separation ensues, resulting in fetal death and expulsion. In chronic placentitis, the fetus may show intrauterine growth retardation.

Streptococcus equizooepidemicus, Escherichia coli, Pseudomonas aeruginosa, Enterobacter spp, and Klebsiella pneumoniae are the most frequent isolates from the vaginal discharge, uterus, placenta, and fetal stomach contents. Other bacteria have also been reported to cause ascending placentitis in mares, including Streptococcus equisimilis, Enterobacter agglomerans, alpha-hemolytic streptococci, Staphylococcus aureus, and Actinobacillus spp. Examination of the placenta shows an edematous and thickened chorioallantois with fibrinonecrotic exudate at the level of the cervical star.

Leptospira spp placentitis is characterized by diffuse lesions secondary to hematogenous spread. Leptospiral placentitis as a cause of abortion seems to be on the rise in Kentucky, Northern Ireland, England, and South America. Several serovars of Leptospira have been isolated from aborted equine fetuses (eg, L interrogans Pomona, Pomona type kennewicki, and Bratislava, L kirschneri Grippotyphosa, and L borgpetersenii Hardjo type hardjo-prajitno).

In North America, the most common isolate is serovar Pomona type kennewicki, which is carried by several wildlife species, including the striped skunk, raccoon, whitetail deer, and opossum.

Most leptospiral abortions occur between 6 and 9 months of gestation. The placenta is thick, heavy, edematous, hemorrhagic, and occasionally covered with a brown mucoid material on the chorionic surface. Funisitis has also been described in leptospiral abortion. The fetus may have mild to moderate icterus and liver enlargement, and fetal histopathologic lesions may include various degrees of nephritis and hepatitis. Diagnosis is by fluorescent antibody staining of placenta or fetal kidney, liver, or lung and by fetal serology. A vaccine is available in the USA but has not been shown to protect against abortion. (See also Leptospirosis in Horses Leptospirosis in Horses In the USA and Canada, Leptospira interrogans serovar Pomona type kennewicki and serovar Grippotyphosa are the most common causes of equine leptospirosis. The prevalence of leptospirosis in... read more .)

Nocardioform placentitis is a distinct type of equine placentitis first described in the USA in the late 1980s. Various groups of gram-positive, filamentous, branching bacteria have been implicated as etiologic agents in mares with nocardioform placentitis, including Nocardia spp, Rhodococcus rubropertinctus, Amycolatopsis spp, and Crossiella equi. Nocardioform placentitis may result in abortion, stillbirth, or birth of weak foals at term. Some mares may exhibit premature mammary gland development and lactation before abortion.

Infection of the placenta is generally thought to be a sequela of hematogenous spread of microorganisms from a primary port of entry. The lesion is an extensive and severe exudative, mucopurulent, and necrotizing placentitis, frequently located at the base of the uterine horns or at the junction between the body and horns of the placenta. The affected area is thickened, and its chorionic surface is covered with brown, necrotic, mucopurulent exudate and dotted with white or yellow granular structures. Underneath this mucoid material, the chorionic surface is reddish white, mottled, and roughened. Villous necrosis and adenomatous hyperplasia of the allantoic epithelium, and hyperplasia with or without squamous metaplasia of the chorionic epithelium are frequently seen. The fetus is often severely underdeveloped as a result of placental insufficiency and does not show any remarkable gross or histologic lesions.

Potomac horse fever Potomac Horse Fever Potomac horse fever (PHF) is an acute enterocolitis syndrome producing mild colic, fever, and diarrhea in horses of all ages, as well as abortion in pregnant mares. The causative agent is Neorickettsia... read more , caused by Ehrlichia risticii, may be followed by abortion in mid- to late gestation. There is placentitis, and the placenta is often retained. E risticii has been isolated from fetal lymphoid tissues after abortion. Histologically, there is fetal colitis. Identification of this colitis provides a presumptive diagnosis. There is a vaccine for Potomac horse fever, but its efficacy in preventing abortion is not known.

Equine Mycotic Placentitis as a Cause of Abortion in Horses

Mycotic placentitis in horses is also due to an ascending infection that causes a thickened chorioallantois with variable exudate. Causative agents include Aspergillus spp, Mucor spp, Candida spp, Histoplasma capsulatum, Coccidoides spp, and Cryptococcus neoformans. Fetuses aborted in late gestation may be fresh, with evidence of growth retardation. A pale, enlarged liver or dermatitis may be found. Hyphae are found in the placenta, liver, lungs, or stomach contents.

(EHV-1) infection, is the most important viral cause of abortion in horses, although EHV-4 has also been isolated from some cases. The principal mode of transmission of the virus from horse to horse is by direct contact through nasal secretions, reproductive tract discharge, placenta, or the aborted fetus. Short-distance airborne spread of infection is possible.

Abortion is usually after 7 months of gestation and is not preceded by maternal illness. The placenta may be edematous or normal. Gross fetal lesions include subcutaneous edema, jaundice, increased volume of thoracic fluid, and an enlarged liver with yellow-white lesions ~1 mm in diameter. Histologically, these lesions represent areas of necrosis containing intranuclear inclusions. Inclusion bodies are also found in necrotic lymphoid tissues. There is often a necrotizing bronchiolitis.

Diagnosis is by fluorescent antibody, PCR, or virus isolation from fetal tissues. Prevention is based on vaccinating at 5, 7, and 9 months of gestation as well as preventing exposure of pregnant mares to horses attending shows or other equine events. Abortion may occur despite regular vaccination.

Equine Viral Arteritis (EVA) as a Cause of Abortion in Horses

Abortion may follow clinical cases of equine viral arteritis Equine Viral Arteritis read more by 6–29 days. Abortion rates can approach 60% in a naive population as the result of direct impairment of placental function and severe fetal infection. Arteritis may be found in the fetal myocardium or placenta, but usually there are no fetal lesions. Stallions can be persistently infected, and EVA can spread venereally (via natural cover or insemination with shipped cooled or frozen semen) or by aerosol.

Diagnosis is by a history of EVA shortly before abortion, virus isolation or PCR of placenta and/or fetal tissues, or by seroconversion of the dam. Prevention of EVA is by management to minimize viral transmission in breeding populations and to prevent development of carrier stallions. In the USA, a licensed modified-live virus vaccine is available for use in nonpregnant mares. Antibody titers resulting from vaccination and natural infection cannot be differentiated, and the serologic status of horses can affect their import status. Therefore, the serologic status of breeding horses should be determined before vaccination, and all subsequent vaccinations should be recorded.