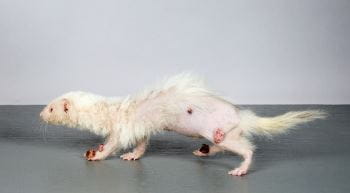 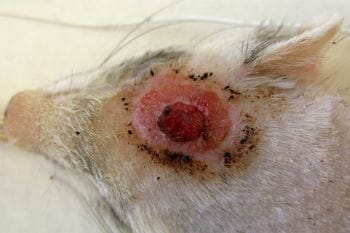 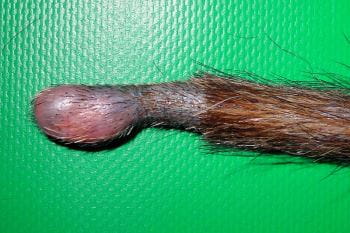 Sebaceous epitheliomas F and cutaneous mast cell tumors are the most common integumentary (skin) tumors in ferrets. These tumors can appear anywhere on the body. Both types appear as raised, irregular, and often scabbed masses. Systemic signs are rare, but the tumors may bleed when scratched. Although the tumors can appear malignant, they are considered benign. Treatment is by means of excision. However, new tumors may appear at any location on the skin after surgical removal of the initial tumors.

Lymphoma is the third most common tumor found in ferrets and can be diagnosed as early as 9 months of age. No gender predilection is known. Clusters of lymphoma have been seen in related or cohabitating ferrets, and a transmission study has shown that at least certain types of lymphoma are transmissible, possibly caused by a viral agent.

, and disease of the spine and CNS are also seen in ferrets. Lymphoma of young ferrets is often rapidly progressive, whereas it is often a chronic disease in adults.

Clinical presentation of ferrets with lymphoma is often nonspecific and may include loss of appetite, weight loss, and peripheral lymph node enlargement.

Diagnostics may include a CBC, radiographs, ultrasonography, computed tomography, and fine-needle aspirations and cytology of suspected tissues. Ultrasonography is the preferred diagnostic technique, because it enables identification of the affected tissues and provides a good aid to allow for accurate collection of cytologic/tissue samples.

Different protocols can be used for the treatment of lymphoma in ferrets, depending on the stage of lymphoma and the wishes of the owner. Surgery can be performed if only a single anatomic structure is affected. Chemotherapy, whether or not combined with radiation therapy, can also be used. The overall mean survival of ferrets with lymphoma has been reported to range from 2 weeks to 19 months (average, 6 months). Treatment with glucocorticoids or chemotherapy does not significantly change survival time, thereby making these treatments questionable, especially when taking into account that chemotherapy may be associated with severe neutropenia.

Chordomas and chondrosarcomas have been reported in ferrets. A chordoma is an intraosseus neoplasm originating from mesoderm-derived notochord and typically appears as a firm mass on the tail. These tumors may also occur in the cervical region, causing paresis and ataxia. Chondrosarcomas can develop anywhere along the spine, ribs, or sternum and tend to cause spinal cord compression and associated clinical signs. Because of their location and slow rate of development, chordomas on the tail are fairly easy to remove, with one or two extra coccygea removed to ensure a clean margin.

Splenomegaly is a common finding in adult ferrets, but its clinical importance remains questionable. The spleen can easily be palpated, and in severe cases it may extend all the way into the pelvic inlet. No abnormalities are usually found on CBC. The most common histologic diagnosis of these enlarged spleens is extramedullary hematopoiesis; however, lymphoma and hemangiosarcoma can occur. An irregular or firm spleen should therefore be investigated with ultrasonography, and nodules should be aspirated. The only indication for splenectomy is if the spleen contains a tumor (eg, lymphoma) or if there is great discomfort. In cases in which the spleen is removed, prior bone marrow biopsies are recommended to ensure sufficient hemopoietic activity.