Lightning Stroke and Electrocution in Animals 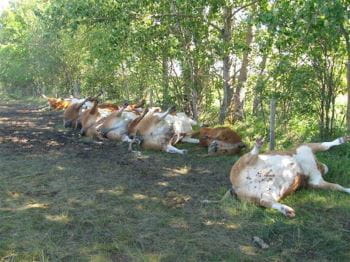 Electrocution, cattle
Injury or death from electrocution may be caused by lightning, fallen power lines, faulty electric circuits, or other causes. Death usually results from cardiac or respiratory arrest. Besides sudden death, signs can include singe marks, temporary loss of consciousness in mild cases, and fractures or muscle damage from severe contractions. Diagnosis may depend on circumstantial evidence, such as the location of groups of affected animals and lack of other signs of disease. For animals that survive the initial event, supportive care is indicated.

Injury or death of an animal due to high-voltage electrical currents may be the result of lightning, fallen transmission wires, faulty electrical circuits, or chewing on an electrical cord. Electrocution due to lightning stroke is seasonal and tends to be geographically restricted. Investigation of possible electrocution should always proceed with caution, because the electrification resulting from broken transmission wires, for example, may still be present. Once the site is clearly safe, the investigation should include the location of the dead animals, examination of all affected animals, and necropsy of those that died. In addition, because of the inevitable insurance claim, photos should be taken of the site of death.

Certain types of trees, especially hardwoods such as oaks and those that are tall and have spreading root systems just beneath the ground surface, tend to be struck by lightning more often than others. Electrification of such roots charges a wide surface area, particularly when the ground is already damp; passage of charged roots beneath a shallow pool of water causes it to become electrified. A tile drain may spread an electric charge throughout its course. Fallen or sagging transmission wires also may electrify a pool of water, fence, or building, and an animal may also directly contact such wires. Differences exist in conductivity of soil; loam, sand, clay, marble, and chalk are good conductors (in decreasing order), whereas rocky soil is not.

Lightning strikes vary in intensity and in the objects struck in the vicinity of the herd. These characteristics, along with the location of animals, largely influence whether the injuries are external or internal. Those factors determine whether a definitive or a circumstantial diagnosis can be made.

Accidental electrocution of farm animals in a barn or adjacent confinement pen usually occurs as a result of faulty wiring. Electrification of a water or milk line stanchion or a metal creep or guard rail can result in widespread distribution of an electric current throughout the stable Stray Voltage in Animal Housing read more that may result in signs of water deprivation or feed refusal.

Death from electric shock usually results from cardiac or respiratory arrest. Passage of current through the heart usually produces ventricular fibrillation, and involvement of the CNS may affect the respiratory or other vital centers.

Varying degrees of electric shock may occur. In most instances of electrocution by lightning stroke, death is instantaneous and the animal falls without a struggle. Occasionally, the animal becomes unconscious but may recover in a few minutes to several hours; residual nervous signs (eg, depression, paraplegia, cutaneous hyperesthesia, blindness) may persist for days or weeks or be permanent.

Singe marks on or damage to the carcass, damage to the immediate environment, or both, occur in ~90% of cases of lightning stroke but are less likely to be found if the animal is electrocuted by standing on electrified earth. Singe marks tend to be linear and are more commonly found on the medial sides of the legs, although rarely much of the body may be affected.

Beneath the singe marks, capillary congestion is common; the arboreal pattern characteristic of lightning stroke can be visualized best from the dermal side of the skin by subcutaneous extravasations of blood. Singe marks are rarely found on recovered animals.

Smaller animals such as pigs that contact electrified water bowls or creeps may be killed instantly or be thrown some distance by the strength of the shock. Electrocuted pigs are often recumbent and may have sustained spinal, pelvic, or limb fractures, resulting from severe muscular contractions.

Diagnosis may depend on circumstantial evidence.

The diagnosis is almost always facilitated by circumstantial evidence, ie, location of the carcass(es) and absence of any disease processes when examined at necropsy. Yet, many times, the cadavers are not immediately found, and postmortem autolysis may prevent a meaningful necropsy. Therefore, the presence of dead animals under a tree, hanging through or near a wire fence, or clustered around a light pole is strong evidence of electrocution by lightning stroke even in the absence of physical evidence such as recent burning of tree bark, splitting of poles or boards in a fence, or any grossly visible lesions on the cadaver. The magnitude, duration, and direction of the current, flash, or blast will produce varying degrees of internal or external histopathologic or gross evidence.

Rigor mortis develops and passes quickly. Postmortem distention of the rumen occurs rapidly and must be differentiated from antemortem ruminal tympany Bloat in Ruminants Bloat is an overdistention of the rumenoreticulum with the gases of fermentation, either in the form of a persistent foam mixed with the ruminal contents, called primary or frothy bloat, or... read more ; in both conditions, the blood tends to clot slowly or not at all. The mucosae of the upper respiratory tract, including the turbinates and sinuses, are congested and hemorrhagic; linear tracheal hemorrhages are common, and large blood clots are occasionally found in the trachea, but the lungs are not compressed as in bloat. All other viscera are congested, and petechiae and ecchymoses may be found in many organs.

Due to postmortem ruminal distention, the poorly clotted blood is passively moved to the periphery of the body, resulting in postmortem extravasation of blood in muscles and superficial lymph nodes of the head, neck, and thoracic limbs, and to a lesser extent in the hindquarters.

Probably the best indication of instantaneous death is the presence of hay or other feed in the animal’s mouth; supportive evidence includes the presence of normal ingesta (especially in the rumen), lack of frothy ingesta (frothy bloat), and presence of normal feces in the lower tract and occasionally on the ground behind the animal. If, for example, the lightning struck the earth nearby, close examination of the feet may provide the only physical evidence of pathology. Few conditions affecting livestock cause such peracute death clustered in a small area.

Farm animals often are insured against lightning stroke, and the insurance claims agent or the veterinarian requested to sign an insurance form should closely observe the situation that initiated the claim. The investigator should ascertain that the animal actually died in the high-risk location rather than having been moved after death. This could be done to merely clean up or to deliberately confuse the investigation. Similarly, examination of recent weather information confirming thunderstorms, if available, is an important part of the process to substantiate an insurance claim. A well-documented description of where the animal(s) died and the results of a necropsy examination are usually acceptable to support an insurance claim of lightning stroke.

Those animals that survive may require supportive and symptomatic therapy. Euthanasia Euthanasia of Animals Euthanasia is the term used to describe a method of killing that minimizes pain, distress, and anxiety experienced by the animal before loss of consciousness. Techniques used in contexts such... read more is warranted for those animals recumbent with fractures or severe muscle injuries.

Listeriosis in Animals
Others also read

Overview of Musculoskeletal Disorders and Diseases in Cats

Overview of Intestinal Diseases in Horses and Foals