Erysipelas is a bacterial disease caused by infection with Erysipelothrix rhusiopathiae. The disease is most often seen as septicemia, but urticarial and endocardial forms exist. E rhusiopathiae infects a wide range of both avian and mammalian hosts. The disease has been reported in domestic fowl, feral avian species,captive wild birds, and mammals. Infection in reptiles and amphibians has been reported. The organism has also been isolated from the surface slime on fish (without causing disease), which may serve as a source of infection for other species. From an economic standpoint, turkeys are the most important poultry species affected, but serious outbreaks have occurred in chickens, ducks, and geese. Among affected mammals, swine are the most economically important species, but E rhusiopathiae infection is also a cause of polyarthritis in lambs. (Also see Erysipelothrix rhusiopathiae Infection Erysipelothrix rhusiopathiae Infection .)

Erysipelas in poultry is seen worldwide and, although considered a sporadic disease, endemic areas exist.

Etiology and Related Organisms of Erysipelas in Poultry

E rhusiopathiae is a facultative, anaerobic bacterium. Two additional genomic species have been described: E tonsillarum and E inopinata, but neither is considered pathogenic for poultry. Morphologically, E tonsillarum and E inopinata cannot be distinguished from E rhusiopathiae. E rhusiopathiae stains gram-positive but tends to decolorize, particularly in older cultures. The organism is small, non-acid fast, nonmotile, does not form spores, and produces no known toxins. There is no flagellum, but a capsule has been demonstrated.

The cellular morphology of E rhusiopathiae is variable. The presence of virulence factors such as neuraminidase play a role in bacterial attachment and invasion of host cells. Cells freshly isolated from tissues during acute infection or from smooth colonies are straight or slightly curved small rods that may occur in short chains. Cells from older cultures or rough colonies tend to become filamentous and may be confused with mycelia. The filamentous form occurs more frequently after repeated passages on artificial media.

E rhusiopathiae has three colony types and grows readily on ordinary culture media containing the blood or sera of various animals. Growth is enhanced by reducing the oxygen content or increasing the carbon dioxide level to 5%–10%. Optimal incubation temperature is 35°–37°C, and the optimal pH range is 7.4–7.8.

The organism is not readily destroyed by the usual laboratory disinfectants. It is quite resistant to dessication and can survive smoking and pickling processes. It may survive in litter or soil for various lengths of time. Infected carriers may shed the organism, seeding the environment and making disinfection of premises difficult. It is inactivated by a 1:1,000 concentration of bichloride of mercury, 0.5% sodium hydroxide solution, 3.5% liquid cresol, 5% solution of phenol, quaternary ammonium, chlorine, or 0.5% formalin as long as it is not in organic matter.

Although 26 different serotypes of E rhusiopathiae were described based on an agar gel diffusion test, some of these serotypes have been assigned to E tonsillarum after its confirmation as a separate species. E rhusiopathiae serotypes 1, 2, and 5 have been most frequently isolated from poultry.

Epidemiology of Erysipelas in Poultry

Erysipelas occurs sporadically in poultry of all ages. It is ubiquitous in nature and found where nitrogenous substances decompose. Turkeys are susceptible regardless of sex or age, although under field conditions it is more common in older birds. Recent evidence indicates there may be a genetically related resistance in turkeys. The incidence in males is reported to be higher, but this is not supported by experimental data. Erysipelas may affect the fertility of males and may contribute to downgrading and processing losses. With the advent of organic, cage-free rearing of commercial layers, an increasing number of erysipelas infections have been reported in chickens.

Infection results from entrance of the organisms through breaks in the skin, through the mucous membranes such as during artificial insemination, by ingestion of contaminated foodstuffs (particularly cannibalism of infected carcasses), and possibly by mechanical transmission via biting insects. The poultry red mite Poultry Red Mite (Red Mite, Roost Mite, Poultry Mite) The most economically important of the many external parasites of poultry are mites of the families Dermanyssidae and Macronyssidae (poultry red mite, northern fowl mite, and tropical fowl mite)... read more 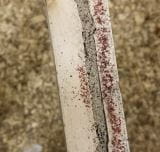 can harbor the organism and may serve as a mechanical vector. Fighting and cannibalism increase losses.

The organism is shed in feces from infected animals and contaminates the soil, in which it may survive for long periods depending on temperature and pH. Poultry, as well as other animals, may be carriers and shed the organism without showing clinical signs of disease. Carriers can shed from feces, urine, saliva, and nasal secretions. Transmission into poultry houses via rodents can occur.

No correlation has been shown to exist between the serotype, chemical structure, or biochemical pattern and the manifestation of the septicemic, urticarial, or endocardial forms of erysipelas.

Clinical Findings of Erysipelas in Poultry

Erysipelas is primarily an acute infection that results in sudden death. In an affected flock, a few birds may be depressed but easily aroused; within 24 hours, a few birds will be dead. Just before death, some birds may be very droopy, with an unsteady gait. Chronic clinical disease in a flock is not usual but does occur; birds may have cutaneous lesions and swollen hocks. Turkeys with vegetative endocarditis usually do not have clinical signs and may die suddenly. Erysipelas should be suspected in flocks that have been artificially inseminated 4–5 days before an episode of death without clinical signs. Rainy, cold weather coinciding with the onset of sexual maturity increases risk of clinical disease. Clinical signs in chickens include general weakness, depression, diarrhea, and sudden death. Most sick birds die. In laying hens, water consumption and egg production may drop markedly. Decreased egg production and conjunctival edema can be seen in organic, cage-free flocks.

At necropsy, a generalized darkening of the skin or various-sized areas of diffuse darkening is common. The liver and spleen are usually enlarged and friable and may be mottled. Other gross lesions such as egg yolk peritonitis, pericarditis, petechiation of the heart, catarrhal exudate in the GI tract, and degeneration of fat associated with the thigh and heart may be noted. Vascular damage and fibrin thrombi are common findings on microscopic examination.

Diagnosis of Erysipelas in Poultry

A presumptive diagnosis of erysipelas can be based on an impression smear of the liver or spleen or on a smear of cardiac blood or bone marrow that shows gram-positive, slender, pleomorphic rods. Bone marrow is the tissue of choice in partially decomposed specimens. Isolation and identification of E rhusiopathiae is necessary for definitive diagnosis. Identification can be made by fluorescent antibody staining and PCR. PCR can distinguish E rhusiopathiae from E tonsillarum. A mouse ear scarification model has been described and is particularly helpful for mixed cultures. An indirect ELISA is available, but virtually all poultry are exposed, with antibody levels increasing with age. Caution must be used in attempting re-isolation, because the organism produces pinpoint colonies that may be easily overlooked or masked by faster-growing bacteria. Highly selective media are available for re-isolation. Recently, it has been shown that erysipelas can be isolated from environmental samples such as swabs taken for Salmonella enteritidis evaluation.

Infections with Escherichia coli or Pasteurella multocida, as well as salmonellosis Salmonelloses in Poultry Salmonella infections are classified as nonmotile serotypes ( S enterica Pullorum and S enterica Gallinarum) and the many motile paratyphoidSalmonella. These Salmonella... read more and peracute Newcastle disease Newcastle Disease in Poultry Newcastle disease is an infection of domestic poultry and other bird species with virulent Newcastle disease virus (NDV). It is a worldwide problem that presents primarily as an acute respiratory... read more , may be confused with the septicemic form of erysipelas. Urticaria and endocarditis may be caused by other miscellaneous bacterial or fungal pathogens. Noninfectious differential diagnoses include poisoning, stampede injuries, or predators.

Treatment, Control, and Prevention of Erysipelas in Poultry

The antibiotic of choice to treat erysipelas is a rapid-acting penicillin such as potassium or sodium penicillin. As soon as a presumptive diagnosis is made, penicillin should be administered IM at 22,000 U/kg body wt, simultaneously with a full dose of erysipelas bacterin. Injectable penicillin is warranted for an acute outbreak but may be an extra-label use.

In situations in which it is impractical to handle every bird, administration of penicillin in the drinking water at 395,000 U/L for 4–5 days reduces losses. Sulfonamides and oral oxytetracycline are not effective; broad-spectrum antibiotics, eg, erythromycin, are effective. Antibiotic in feed or water treats only those in the flock that are still eating and drinking normally and may not have dramatic results.

Recovered birds have a high degree of resistance. Vaccination with a bacterin helps protect those birds in the flock not yet infected. However, bacterin-derived immunity is not long-lasting and may require two or more injections at intervals of 2–4 weeks. Antibiotic therapy or vaccination does not eliminate the carrier state. Antibiotic resistance to tetracycline has been reported.

Vaccination will control erysipelas. Both inactivated and live vaccines are available for use in turkeys; only vaccines approved for use in turkeys should be used. The use of bacterins in flocks used for meat is useful but labor intensive. For breeders, the bacterin should be given every 4 weeks before onset of egg production. The use of live vaccines administered in the drinking water does not require handling each bird and, therefore, is less stressful. Live vaccines require two doses at intervals of 2–3 weeks. Commercially available swine erysipelas vaccine can be used in layers and is given at up to two times the recommended dose for swine via injection. It does not interfere with egg production. Although the swine vaccine is safe, no challenge studies have been done.

There are no specific husbandry recommendations other than sound management practices for the control of erysipelas in poultry, particularly in endemic areas. After an outbreak, equipment should be thoroughly disinfected and dead birds removed from the premises.

Zoonotic Risks of Erysipelas in Poultry

E rhusiopathiae can infect people and causes three different syndromes: erysipeloid, a generalized cutaneous form, and a septicemic form with endocarditis. The organism usually enters through cuts in the skin, and those at risk include people who handle infected tissues, such as veterinarians, butchers, and fish handlers. There have been no reports of people becoming infected through the oral route.