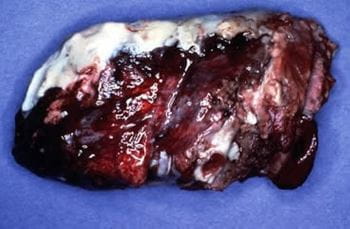 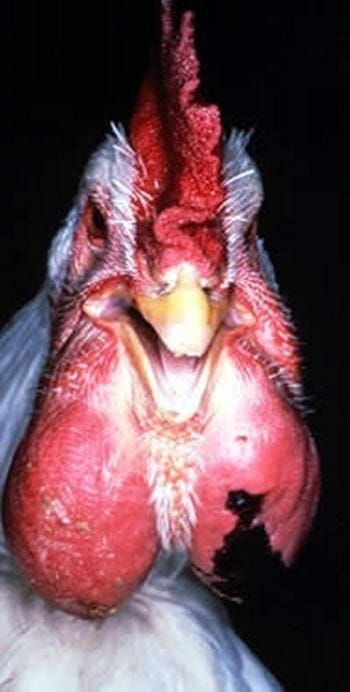 Fowl cholera, swollen wattles, broiler
Fowl cholera is a contagious, bacterial disease of birds caused by Pasteurella multocida. Acutely, it causes elevated mortality. Chronically, it causes lameness, swollen wattles (in chickens), pneumonia (in turkeys), and torticollis, but it can also be asymptomatic. Both attenuated live vaccines and adjuvanted bacterins are available to aid in prevention, and it is sensitive to some antibiotics.

Fowl cholera is a contagious, bacterial disease that affects domestic and wild birds worldwide. It usually occurs as a septicemia of sudden onset with high morbidity and mortality, but chronic and asymptomatic infections also occur.

Pasteurella multocida, the causal agent of fowl cholera, is a small, gram-negative, nonmotile rod with a capsule that may exhibit pleomorphism after repeated subculture. P multocida is considered a single species although it includes three subspecies: multocida, septica, and gallicida. Subspecies multocida is the most common cause of disease, but septica and gallicida may also cause cholera-like disease.

Chronically infected birds and asymptomatic carriers are considered to be major sources of infection. Wild birds may introduce the organism into a poultry flock, but mammals (including rodents, pigs, dogs, and cats) may also carry the infection. However, the role of these as a reservoir has not been thoroughly investigated. Dissemination of P multocida within a flock and between houses is primarily by excretions from the mouth, nose, and conjunctiva of diseased birds that contaminate their environment. In addition, P multocida survives long enough to be spread by contaminated crates, feed bags, shoes, and other equipment. The infection does not seem to be egg-transmitted.

In chronic fowl cholera, signs and lesions are generally related to localized infections of the sternal bursae, wattles, joints, tendon sheaths, and footpads, which often are swollen because of accumulated fibrinosuppurative exudate. There may be lameness, as well as exudative conjunctivitis and pharyngitis. Torticollis may result when the meninges, middle ear, or cranial bones are infected.

Lesions observed in peracute and acute forms of the disease are primarily vascular disturbances. These include general passive hyperemia and congestion throughout the carcass, accompanied by enlargement of the liver and spleen. Petechial and ecchymotic hemorrhages are common, particularly in subepicardial and subserosal locations. Increased amounts of peritoneal and pericardial fluids are frequently seen. In addition, acute oophoritis with hyperemic follicles may be observed. In subacute cases, multiple, small, necrotic foci may be disseminated throughout the liver and spleen.

In chronic forms of fowl cholera, suppurative lesions may be widely distributed, often involving the respiratory tract, the conjunctiva, and adjacent tissues of the head. Caseous arthritis and productive inflammation of the peritoneal cavity and the oviduct are common in chronic infections. A fibrinonecrotic dermatitis that includes caudal parts of the dorsum, abdomen, and breast and involves the cutis, subcutis, and underlying muscle has been observed in turkeys and broilers. Sequestered necrotic lung lesions in poultry should always raise suspicion of cholera.

Although the history, signs, and lesions may aid field diagnosis, P multocida should be isolated, characterized, and identified for confirmation. Primary isolation can be accomplished using media such as blood agar, dextrose starch agar, or trypticase soy agar. Isolation may be improved by the addition of 5% heat-inactivated serum. P multocida can be readily isolated from viscera of birds dying from peracute/acute fowl cholera, whereas isolation from suppurative lesions of chronic cholera may be more difficult. At necropsy, bipolar microorganisms may be demonstrated by the use of Wright’s or Giemsa stain of impression smears obtained from the liver in the case of acute cholera. In addition, immunofluorescent microscopy and in situ hybridization have been used to identify P multocida in infected tissues and exudates.

PCR has been used for the detection of P multocida in pure and mixed cultures and clinical samples. This method may help identify carrier animals within flocks. However, the specificity and sensitivity of the PCR must be improved. Conventional serotyping suffers from problems with reproducibility and reliability, and the methods are quite laborious. A multiplex PCR has been developed that can differentiate between different somatic serotypes and may enable more efficient vaccine development.

Several bacterial infections may be confused with fowl cholera based solely on the gross lesions. Escherichia coli, Salmonella enterica, Ornithobacterium rhinotracheale, gram-positive cocci, and Erysipelothrix rhusiopathiae (erysipelas) may all produce lesions indistinguishable from those caused by P multocida.

Rodents, wild birds, pets, and other animals that may be carriers of P multocida must be excluded from poultry houses. The organism is susceptible to ordinary disinfectants, sunlight, drying, and heat.

Attenuated live vaccines are available for administration in drinking water to turkeys and by wing-web inoculation to chickens. These live vaccines can effectively induce immunity against different serotypes of P multocida. They are recommended for use in healthy flocks only.

A number of drugs will lower mortality from fowl cholera; however, deaths may resume when treatment is discontinued, showing that treatment does not eliminate P multocida from a flock. Eradication of infection requires depopulation and cleaning and disinfection of buildings and equipment. The premise should then be kept free of poultry for a few weeks.

When antibiotics are used, early treatment and adequate dosages are important. Sensitivity testing often aids in drug selection and is important because of the emergence of multiresistant strains. Sulfamethazine or sulfadimethoxine in feed or water usually controls mortality. Sulfas should be used with caution in breeders because of potential toxicity and cannot be used in hens laying eggs for human consumption. High levels of tetracycline antibiotics in the feed (0.04%), drinking water, or administered parenterally may be useful. Penicillin in turkeys is often effective for sulfa-resistant infections. In ducks, a combined injection of streptomycin and dihydrostreptomycin can be effective.

Fowlpox in Chickens and Turkeys
Others also read