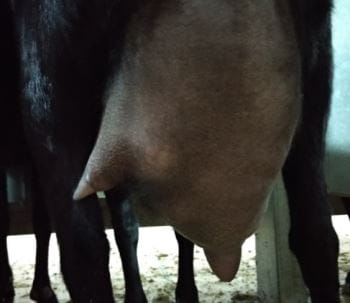 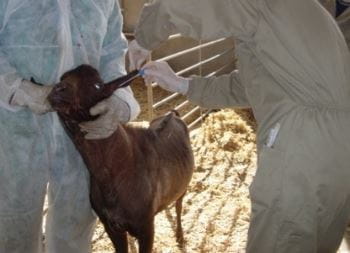 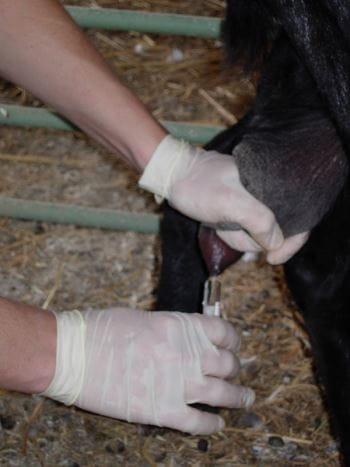 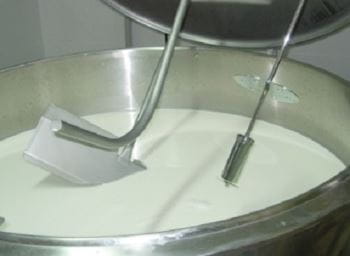 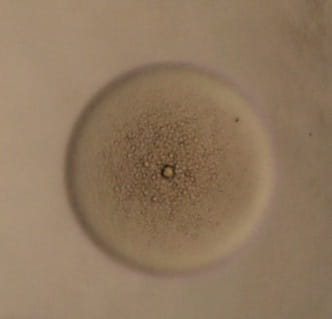 Culture test
Contagious agalactia is caused primarily by Mycoplasma agalactiae and affects sheep and goats. The most common clinical signs are mastitis, conjunctivitis, and arthritis, although these are rarely observed in the same animal. Diagnosis depends on laboratory testing. Vaccine efficacy is variable, and animals should not be vaccinated during an outbreak.

Contagious agalactia (CA) is a multi-etiologic syndrome mainly affecting small ruminants worldwide. Mycoplasma agalactiae is the main agent in both sheep and goats, but Mycoplasma mycoides capri, and, depending on the geographic area, M capricolum capricolum and Mycoplasma putrefaciens have been implicated in the disease in goats and sporadically isolated in sheep.

Mastitis, conjunctivitis, and arthritis, rarely observed in the same animal or even in the same herd, are the classic signs associated with a clinical outbreak of contagious agalactia, and mastitis and sporadic episodes of mammary gland atrophy are frequent in animals in chronically infected herds. Respiratory signs and reproductive disorders, including abortions, also may be seen.

The diagnosis is complex in endemic areas and always depends on laboratory testing. PCR assay, culture of patient samples, or both; are the most suitable tools for diagnosis, and serologic testing can be used for nonvaccinated herds. Antimicrobial therapy is an alternative to culling infected animals when an outbreak occurs, although it cannot achieve a bacteriologic cure. Efficacy of available vaccines is variable and cannot prevent new infections. Use of vaccines during a clinical outbreak is not recommended.

Etiology and Epidemiology of Contagious Agalactia in Small Ruminants

Dairy and meat sheep and goats are susceptible to M agalactiae. The syndrome is more complex in goats because of the presence of four causal agents. Thus, mixed infections are common at the herd or individual level in goats. Molecular studies have revealed a high genetic and antigenic variability between M agalactiae isolates. Genetic diversity is higher in caprine isolates, even those recovered in closed areas.

CA is a worldwide disease considered endemic in many countries surrounding the Mediterranean, in particular Portugal, Spain, Greece, Italy, France, Turkey, Israel, and North Africa, as well as in many parts of the Middle East, Asia, and America. Sporadic cases have been reported in the USA.

CA-causing mycoplasmas persist lifelong in infected animals. Thus, the presence of asymptomatic carriers is common in chronically infected herds. During an outbreak, clinically affected animals that recover are permanent carriers despite treatment. Both types of carriers are the main reservoir of the organism within the herd. Animals of either sex or any age can be asymptomatic carriers—thus, they also represent the main source of infection for new herds because of animal movements.

Clinical recurrence is common after a stress period in animals that have recovered. Goats are commonly auricular asymptomatic carriers. Mycoplasma spp are recovered from the ears of these animals that have had systemic infection. Frequently, carriers are seronegative. Introducing such carriers into a susceptible flock can initially cause high morbidity and mortality. Once established in a herd, young ruminants mainly become infected while suckling colostrum and milk. Adults are mainly infected via the milking machines or direct contact with aerosols of infected animals. Other routes of transmission are possible but rare. Venereal transmission is suggested based on the presence of M agalactiae or M mycoides capri in semen or on the presence of genital lesions in both sexes.

Clinical Findings and Lesions of Contagious Agalactia in Small Ruminants

Two different clinical pictures occur. Clinical outbreaks are commonly characterized by a short incubation period of weeks and can be followed by either acute disease with fever and occasionally death or, more often, subacute disease characterized by mastitis Mastitis in Large Animals This newly calved heifer died from peracute, severe Staphylococcus aureus infection. Mastitis, or inflammation of the mammary gland, is predominantly caused by bacterial pathogens and occasionally... read more

, arthritis Arthritis is a nonspecific term denoting inflammation of a joint. All joint diseases of large animals have an inflammatory component to varying degrees. Arthritic entities of importance include... read more

, in which all signs are rarely present in the same animal or even herd.

Infection begins as an interstitial mastitis, producing a hot, swollen, and painful udder, followed by a sudden drop in the quantity and quality of milk production. The milk may appear discolored and granular, separating into watery and solid phases, or it may take on a thick, yellow consistency with clots obstructing the teat duct. After several days, the affected udder shrinks because of damage to secretory tissue. Abscesses within the udder and enlargement of the retromammary lymph nodes may also be seen. In some cases, atrophy and fibrosis lead to permanent loss of milk production.

Uni- or bilateral arthritis can be seen in adults and in the young, which have difficulty keeping up with the flock; this can be the first clinical finding in affected herds mainly in meat animals. Affected animals may be seen limping or sitting on their carpal or tarsal joints because of the discomfort. The joints are hot, swollen, and painful.

Conjunctivitis presents as a discharge of clear ocular exudates, followed by corneal opacity, keratitis, purulent exudation, and occasionally ulceration and panophthalmitis. Severe cases may result in irreversible blindness, especially associated with the presence of another bacteria, such as Moraxella ovis. Abortion caused by mycoplasma in the bloodstream, as well as respiratory disease, typically in kids, also may be seen.

Chronically infected herds represent the epidemiologically dominant variant in many countries in which the disease is endemic. Subclinical mastitis with animals continually affected with atrophy or sporadic arthritis, or a continuous presence of mycoplasmas in bulk tank milk, leads to permanent loss of milk production.

The infected udder is grossly atrophic in one or both sides. Microscopically, the chronic inflammatory reaction in the stroma shows increased fibrosis and a reduced number of glandular acini. Infected joint capsules are edematous, and the synovium may contain clumps of fibrin. Articular surfaces may be eroded and occasionally ankylosed. In early stages of keratitis, the cornea is edematous and infiltrated with leukocytes; later, abundant purulent exudate infiltrates both the cornea and the ciliary body. In addition, the presence of mild chronic conditions in some organs of chronically infected animals have been described. Nervous tissue colonization has also been described, although clinical signs have scarcely been reported.

Preferred samples from living animals to help confirm diagnosis of contagious agalactia include milk and udder secretions, joint fluid from arthritic cases, and eye swabs from cases of ocular disease. Isolation of mycoplasmas from the blood during the brief mycoplasmaemia stage of the disease is rarely successful. Post-mortem tissue and fluid specimens should include udder and associated lymph nodes, joint fluid, lung tissue (at the interface between diseased and healthy tissue), and pleural or pericardial fluid. Samples should be kept moist and cool and sent promptly to a diagnostic laboratory. Microbial culture or PCR assay which also can be performed directly on clinical samples within hours, can be used to confirm the diagnosis.

Continual monitoring of bulk tank milk samples due to the intermittent excretion of mycoplasmas, as well as mastitis samples or auricular or nasal swabs collected to detect the presence of carriers, are suitable options in endemic areas. The ear canal of goats is a rich source of both pathogenic and nonpathogenic mycoplasmas, so specific diagnosis should be conducted. Detection of serum antibodies by ELISA provides rapid diagnosis of disease but may not be very sensitive in chronically affected herds and flocks, so its use for individual diagnosis is not recommended. Indirect ELISA tests for M agalactiae are commercially available and have been used routinely in control programs to screen herds. Immunoblotting can be used to confirm suspect ELISA results and can distinguish antibodies that have developed in response to field infection from those that have developed after vaccination, but this option is complex and time-consuming for routine diagnosis. Serologic tests are not commercially available for M mycoides capri, M capricolum capricolum, and M putrefaciens.

A number of other mycoplasmas are commonly isolated from small ruminants, such as Mycoplasma arginini; Mycoplasma ovipneumoniae, the causal agent of atypical pneumonia; M conjunctivae, a common cause of keratoconjunctivitis; or the nonpathogenic mycoplasmas Mycoplasma auris, Mycoplasma cottewii, and Mycoplasma yeatsii. Other bacteria causing mastitis are mainly staphylococci, streptococci, enterobacteriacea, and Corynebacterium. Small ruminant lentivirus should also be considered in cases of arthritis in adults.

Treatment, Control, and Prevention of Contagious Agalactia in Small Ruminants

Antimicrobials that inhibit cell wall synthesis (eg, penicillins) are not effective against contagious agalactia. In vitro tests have shown increased antimicrobial resistance from M agalactiae, M mycoides capri, or M capricolum capricolum, and a minimal inhibitory concentration test of recovered bacteria is recommended, when possible. Fluoroquinolones, macrolides, tetracyclines, or lyncosamides are therapeutically used. These can bring about clinical improvement, particularly if given early in the disease, but there is always the danger of promoting carrier animals. M agalactiae is genetically resistant to erythromycin.

In endemic areas, inactivated vaccines are used with mixed success, and published data on their effectiveness is scarce. Some have provided protection from clinical disease. However, they do not prevent infection or transmission of mycoplasmas. Generally, the duration of immunity, particularly to the formalinized, inactivated vaccines used in Europe, is short, and ongoing inoculations are recommended. Vaccines containing two or three of the causative agents are available. Attenuated vaccines have been used in Europe but are currently not approved.

Regular laboratory monitoring of flocks/herds help to prevent spread or introduction of disease and can be done on serum and/or milk (including bulk tank milk) by serology, culture, or PCR. Carriers can also be detected. Culling or isolation of infected animals is generally advised. When this is not possible, hygienic measures, such as improved milking routine and pasteurizing milk or colostrum before feeding to the young, should be implemented. The introduction of replacement animals should be avoided; if this is impossible, they should be tested to prevent entry of carriers. Artificial insemination is a safety tool for genetic entry.

has been associated with infection with M capricolum capricolum after a coincidental contact with small ruminants or consumption of food products from goats.

Overview of Lameness in Small Animals