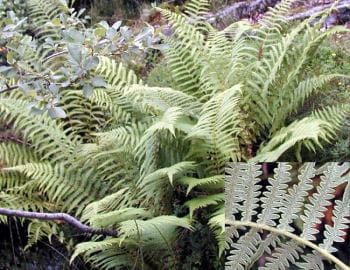 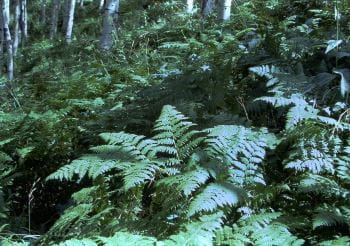 Bracken fern (Pteridium aquilinum) is found throughout the world and is among the five most numerous vascular plants in the world. Because the species includes numerous subspecies and varieties, plant size varies, with frond lengths ranging from 0.5 to 4.5 m.

Bracken fern is a perennial, with erect deciduous fronds that remain green until they are killed by frost or drought. It spreads primarily through dense rhizome networks, and it can dominate plant communities, especially those that are burned or disturbed. Bracken fern can be found in a diversity of sites, but it is most common in semi-shaded, well-drained, open woodlands.

A variety of syndromes have been associated with bracken fern poisoning. These syndromes are largely determined by the dose and duration of exposure and the species of the poisoned animal.

Enzootic hematuria, the most common form of bracken fern poisoning, primarily affects cattle and less frequently affects sheep. It is characterized by intermittent hematuria and anemia Anemia in Animals Anemia is an absolute decrease in RBC numbers, hemoglobin concentration, or PCV. Signs include pale mucous membranes, increased heart rate, and hypotension. Diagnosis can be made by CBC, but... read more

. Poisoning most often occurs during late summer when other feed is scarce, or when animals are fed hay containing bracken fern. Poisoning requires prolonged exposures because affected livestock must ingest bracken fern for several weeks to years before disease develops.

Affected cattle are weak, rapidly lose weight, and develop fever (106°–110°F [41°–43°C]). Calves often have difficulty breathing, with pale mucosal membranes. Hemorrhages vary from minor mucosal petechia to effusive bleeding, and, at times, large blood clots may be passed in the feces. Coagulation is prolonged, and bleeding may be pronounced and excessive even at small wounds such as insect bites or other minor scratches.

Once animals develop clinical disease, poisoning is almost always fatal. Postmortem examinations usually reveal multiple hemorrhages or bruises throughout the carcass. There may also be necrotic and hemorrhagic ulcers in the GI tract. The bladder mucosa often contains small hemorrhages, dilated vessels, or vascular, fibrous, or epithelial neoplasms. Other neoplasms in the upper GI tract of cattle and other species have also been reported. In most cases, mixtures of hemorrhagic and neoplastic lesions are found.

Although not all bracken fern toxins have been completely characterized, the primary cause of enzootic hematuria has been attributed to ptaquiloside, a norsesquiterpene glucoside. Other toxic and potentially carcinogenic toxins include quercetin, isoquercetin, ptesculentoside, caudatoside, astragalin, and various tannins.

Ptaquiloside is a potent radiomimetic compound that initially damages the bone marrow and later is carcinogenic (primarily producing urinary tract neoplasia in ruminants). Both the hemorrhagic syndrome and uroepithelial neoplasms have been reproduced experimentally with bracken fern and ptaquiloside. High ptaquiloside doses for a few months duration produce the characteristic hemorrhagic disease. This has been attributed to ptaquiloside’s radiomimetic damage to proliferating bone marrow stem cells. This is characterized by depletion of bone marrow megakaryocytes followed by both leukocytic and erythrocytic hypoplasia. The resulting leukogram is often a mixed response. In the initial phase of poisoning there is often pronounced monocytosis followed by granulocytopenia and thrombocytopenia. Final phases include marked thrombocytopenia with anemia, leukopenia, and hypergammaglobulinemia. Urinalysis generally includes hematuria and proteinuria. Affected animals have both an increased susceptibility to infection and a tendency for spontaneous bleeding.

Lower doses of bracken fern for longer duration appear more likely to be carcinogenic. The effects seem to be cumulative as animals are exposed repeatedly for years. Often, the onset of clinical disease is delayed for weeks, or even months, after animals have been removed from bracken fern-infested ranges and pastures. In addition to livestock, the carcinogenic potential of bracken fern and ptaquiloside has been confirmed in rats, mice, guinea pigs, quail, and Egyptian toads.

Ptaquiloside is excreted in the urine and milk of poisoned animals, and contaminated milk has been shown to produce GI neoplasms in rats. Several investigators have suggested ptaquiloside neoplastic transformation may be promoted or enhanced by bovine papillomavirus Bovine Warts (Bovine Papillomavirus): Bovine herpesvirus II and IV (BHV-II, BHV-IV) can cause an acute, ulcerative condition of teat and udder skin of dairy cows that is often referred to as bovine ulcerative mammillitis. BHV-II... read more infection. However this may be a secondary change due to bracken fern-associated myelodysplasia and subsequent immunosuppression that are likely to promote papillomavirus infection.

A less common presentation of ptaquiloside toxicity is called bright blindness. It is seen clinically as tapetal hyperreflectivity that is most commonly reported in sheep in parts of England and Wales. Affected sheep are permanently blind and adopt a characteristic alert attitude. The pupils respond poorly to light, and funduscopic examination in advanced disease is characterized by narrowing of arteries and veins and a pale tapetum nigrum with fine cracks and spots of gray. Histologically, the lesion is seen as severe atrophy of the retinal rods, cones, and outer nuclear layer that is most pronounced in the tapetal portion of the retina. Affected animals often have many of the other bracken fern-associated lesions such as bone marrow suppression, hemorrhage, immunosuppression, and urinary tract neoplasia.

Bracken fern poisoning in monogastric animals was first recognized as a neurologic disease when horses consumed contaminated hay. Typical poisoning requires relatively high doses of long duration, such as feeding hay with 20%–25% bracken fern contamination for 3+ months. Equine bracken staggers is characterized by anorexia, weight loss, incoordination, and a crouching stance while arching the back and neck and standing with feet placed wide apart. When forced to move, trembling muscles are noted. In severe cases, tachycardia and arrhythmias may occur, and death (usually 2–10 days after onset) is preceded by convulsions, clonic spasms, and opisthotonos. Poisoning has been attributed to bracken fern thiaminases, because clinical disease is similar to vitamin B1 deficiency. Most animals respond with thiamine therapy.

Poisoning in pigs is rare and less distinct, as affected animals become anorexic and lose weight. Often resembling heart failure in the terminal phase, death can occur suddenly after recumbency and dyspnea.

Thiamine deficiency is generally not a problem in ruminants because the vitamin is synthesized in the rumen; however, altered thiamine metabolism and polioencephalomalacia Polioencephalomalacia read more in sheep poisoned with bracken fern and rock fern (Cheilanthes sieberi) have been reported in Australia.

Initial epidemiologic studies suggest that consumption of milk from cattle with access to bracken fern produces increased risk of human esophageal or gastric cancer. This association suggests there would be even greater risk with direct consumption of bracken fern. This does occur because bracken rhizomes have been used to make flour. The young shoots or croziers are considered a delicacy in many parts of the world. Although preparing and cooking lessens toxicity, ptaquiloside has been identified in all of these foods. Additionally, ptaquiloside has been found as an environmental contaminant in soil and water associated with bracken contamination. All exposures should be considered a potential human health hazard.

Because bracken fern poisoning, apart from thiamine deficiency, is essentially untreatable, it is most easily controlled by preventing exposure. The majority of poisonings occur when animals are forced to eat bracken fern when other forages are exhausted in late summer. However, some animals may develop a taste for the young, tender shoots and leaves. Certainly, poisoning can be avoided by removing animals from bracken fern exposure and improving pasture management to increase production of alternative forage. It has been suggested that alternating bracken fern-contaminated and noncontaminated pastures at 3-week intervals can minimize poisoning.

Bracken fern growth can be retarded by close grazing or trampling in alternate grazing pasture systems. Bracken fern density can be reduced by regular cutting of the mature plant or, if the land is suitable, by deep plowing. Herbicide treatment using asulam or glyphosate can be an effective method of control, especially if combined with cutting before treatment. Recent work has found that some bracken populations contain very low or no ptaquiloside. More work is needed to identify these populations, determine why they are not toxic, and use this information to predict or reduce toxicity.

Initial treatment of bracken fern poisoning for all species should be to discontinue exposure to bracken fern, remembering that disease can appear weeks after livestock are removed from the fern-infested area. In acutely affected cattle, mortality is usually >90%. Measurement of the platelet count is recommended because it is the best prognostic indicator for poisoned animals.

Treatment of bracken fern-induced thiamine deficiency in horses is highly effective if diagnosis is made early. Injection of a thiamine solution at 5 mg/kg is suggested, given initially IV every 3 hours, then IM for several days. Oral supplementation may be required for an additional 1–2 weeks, although SC injection of 100–200 mg daily for 6 days has been successful in some cases. Thiamine treatment should also include animals similarly exposed but not yet showing signs, because signs can develop days or weeks after removal from the source of bracken fern. Antibiotics may be useful to prevent secondary infections. Blood or even platelet transfusions may be appropriate but require large volumes to effectively treat cattle (2–4 L blood). Although untested, treatment with granulocyte-macrophage colony-stimulating factor (used to treat aplastic anemia in humans) may also be considered.