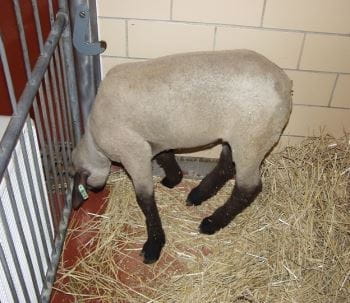 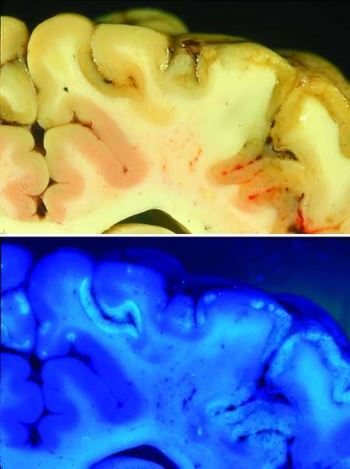 Sulfur-induced polioencephalomalacia, steer
Polioencephalomalacia is a common neurologic disease of ruminants. The main clinical signs reflect dysfunction of the cerebrum and include wandering, circling, cortical blindness, incoordination, head pressing, recumbency, nystagmus, and seizure activity. Some animals are found dead. Clinical diagnosis is often difficult and suspected based on the combination of neurologic signs, elimination of other diagnoses, and response to thiamine administration. Antemortem diagnostic tests include blood thiamine levels, erythrocyte transketolase activity, thiamine pyrophosphate, and, in cases of suspected sulfur-induced polioencephalomalacia, by determination of sulfur content in feed and water.

Polioencephalomalacia (PEM) is an important neurologic disease of ruminants that is seen worldwide. Cattle, sheep, goats, deer, and camelids are affected. PEM is a pathologic diagnosis and a common end point of several conditions. Historically, PEM has been associated with altered thiamine status, but more recently an association with high sulfur intake has been seen. Other toxic or metabolic diseases (eg, acute lead poisoning, sodium toxicosis/water deprivation) can result in PEM as well.

Polioencephalomalacia is seen sporadically in individual animals or as a herd outbreak. Younger animals are more frequently affected than adults. Pastured animals can develop PEM, but animals on high-concentrate diets are at higher risk, as are cattle exposed to high levels of sulfur, whether in water, feed (rations with byproducts of corn or beets processing), or a combination. The patterns of PEM occurrence depend on the etiologic factors involved.

PEM has been associated with two types of dietary risks: altered thiamine status and high sulfur intake. Thiamine inadequacy in animals with PEM has been suggested by several types of observations, including decreased concentrations of thiamine in tissues or blood and deficiency-induced alterations of thiamine-dependent biochemical processes (decreased blood transketolase activity, increased thiamine pyrophosphate effect on transketolase, and increased serum lactate). Unfortunately, many of these biochemical features of altered thiamine status are inconsistently observed in cases of PEM, and decreased thiamine status has been observed in diseases other than PEM.

Preruminant animals depend on dietary thiamine. In adult ruminants, thiamine is produced by rumen microbes. Thiamine inadequacy can be caused by decreased or altered production by rumen microbes (such as high-concentrate feed in feedlot steers) or factors that interfere with the action of thiamine, eg, plant thiaminases or thiamine analogues. Thiaminases can be produced by gut bacteria or ingested as preformed plant products. They can either destroy thiamine or form antimetabolites that interfere with thiamine function. Thiaminase I, produced by Bacillus thiaminolyticus and Clostridium sporogenes, and thiaminase II, produced by B aneurinolyticus, catalyze the cleavage of thiamine. The latter microorganism proliferates under conditions of high grain intake.

A neurologic disorder diagnosed in Australia has been associated with the Nardoo fern (Marsilea drummondii), which may contain high levels of a thiaminase I enzyme. Other ferns, such as bracken Bracken Fern Poisoning read more (Pteridium aquilinum) and rock fern (Cheilanthes sieberi), contain a similar thiaminase I. Although PEM has been produced experimentally by feeding high doses of extracts of such plants, field cases are uncommon, because these plants are unpalatable.

Overall, there is not a linear relation among the presence of ruminal and fecal thiaminase, decreased concentrations of tissue and blood thiamine, and development of disease.

A beneficial response to thiamine therapy by PEM-affected animals is sometimes considered evidence of thiamine inadequacy. This thiamine-responsiveness is often seen if treatment is initiated early in the course of the disease. However, the assumption that this response indicates that deficiency of thiamine is the true etiology should be viewed with caution.

PEM associated with high sulfur intake is recognized with increasing frequency. The basis of sulfur-related PEM appears to be the production of excessive ruminal sulfide due to the ruminal microbial reduction of ingested sulfur. Hydrogen sulfide (H2S) gas, which has the odor of rotten eggs, accumulates in the rumen gas cap. Concentrations can be demonstrated with commercially available H2S detection tubes via percutaneous gas sampling. Although nonreduced forms of sulfur, such as sulfate and elemental sulfur, are relatively nontoxic, H2S and its various ionic forms are highly toxic substances that interfere with cellular energy metabolism. The CNS, by virtue of its dependence on a high and uninterrupted level of energy production, is likely to be significantly affected by energy deprivation.

A variety of sulfur sources can result in excessive sulfur intake, including water, feed ingredients, and forage. Many geographic areas have surface and deep waters high in sulfate. When evaporation occurs, water sulfate concentrations increase. Water consumption by cattle is temperature dependent and increases greatly at high temperatures, leading to increased sulfur intake due to concurrent increases in water consumption and sulfate concentrations in water.

Alfalfa, by virtue of its high protein and sulfur-containing amino acid content, can serve as a significant source of sulfur. Although grasses tend to be low in sulfur, some circumstances can result in high sulfate concentrations. Certain weeds, including Canada thistle (Cirsium arvense), kochia (Kochia scoparia), and lambsquarter (Chenopodium spp), can accumulate sulfate in high concentration. Cruciferous plants normally synthesize sulfur-rich products and serve as important sources of excess sulfur. These include turnips, rape, mustard, and oil seed meals. Byproducts of corn, sugar cane, and sugar beet processing commonly have a high sulfur content, apparently due to the addition of sulfur-containing acidifying agents. PEM has been associated with the use of these types of byproducts as feed ingredients. Corn-based ethanol production has resulted in increased availability of corn byproducts that may vary widely in sulfur content. Wet distillers grains plus solubles have been shown to have sulfur content ranging from 0.44%–1.74% sulfur as dry matter. A high molasses-urea diet has been associated with a form of PEM that lacks altered thiamine status.

Polioencephalomalacia may be acute or subacute. Animals with the acute form often manifest blindness followed by recumbency, tonic-clonic seizures, and coma. Those with a longer duration of acute signs have poorer responses to therapy and higher mortality. Animals with the subacute form initially separate from the group, stop eating, and display twitches of the ears and face. The head is held in an elevated position. There is cortical blindness with absent menace response but normal bilateral pupillary light reflex. Dorsomedial strabismus may develop. Animals may show ataxia and sometimes a hypermetric gait. As the disease progresses, there is cortical blindness with a diminished menace response and unaltered palpebral and pupillary responses. Dorsomedial strabismus may develop. Head pressing, opisthotonos, and grinding of the teeth may also be seen.

Gross lesions due to polioencephalomalacia are inconsistent and frequently subtle, especially early in the disease. Acutely affected animals may have brain swelling with gyral flattening and coning of the cerebellum due to herniation into the foramen magnum. Slight yellowish discoloration of the affected cortical tissue may be present. The brains of acutely affected animals may also have autofluorescent bands of necrotic cerebral cortex evident on meningeal and cut surfaces of the brain when viewed with ultraviolet illumination. As the pathologic process progresses, the affected cerebrocortical tissue has macroscopically evident cavitation, sometimes sufficient to result in apposition of the pia meninges to the white matter.

The initial histologic lesions are necrosis of cerebrocortical neurons. The neurons are shrunken and have homogeneous, eosinophilic cytoplasm. Nuclei are pyknotic, faded, or absent. Cortical spongiosis is sometimes present in the early phases of the acute form. Vessel cells undergo hypertrophy and hyperplasia. At later stages, the affected cortical tissue undergoes cavitation as macrophages infiltrate and necrotic tissue is removed. A pattern seen in brains of cattle with early, severe, acute sulfur-related PEM features multifocal vascular necrosis, hemorrhage, and parenchymal necrosis in deep gray matter, including the striatum, thalamus, and midbrain.

Differential diagnoses for cattle include:

Differential diagnoses for sheep include:

Confirmation of etiology or pathogenesis requires laboratory testing of samples from affected animals or their environment. Assessment of thiamine status is difficult, and results should be interpreted with caution. Few laboratories are capable of routinely measuring thiamine content of blood and tissues, transketolase activity, or the thiamine pyrophosphate effect on transketolase. Demonstration of clinical improvement after thiamine therapy is not adequate evidence for a specific diagnosis.

The treatment of choice for polioencephalomalacia regardless of cause is thiamine administration at a dosage of 10 mg/kg, three to four times daily, for cattle or small ruminants. The first dose is administered slowly IV; otherwise, the animal may collapse. Subsequent doses are administered IM for 3–5 days. Therapy must be started early in the disease course for benefits to be achieved. If brain lesions are particularly severe or treatment is delayed, full clinical recovery may not be possible. Beneficial effects are usually seen within 24 hours and sometimes sooner; however, if there is no initial improvement, treatment should be continued for ≥3 days. Reduction of cerebral edema can be attempted with administration of dexamethasone at a dosage of 1–2 mg/kg, IM or SC. Symptomatic therapy for convulsions may be necessary.

Dietary supplementation of thiamine at 3–10 mg/kg feed has been recommended for prevention, but the efficacy of this approach has not been carefully evaluated. During a PEM outbreak, sufficient roughage should be provided. When the problem could be associated with high sulfur intake, all possible sources of sulfur, including water, should be analyzed and the total sulfur concentration of the consumed dry matter estimated. Dietary ingredients or water with high sulfur concentration should be avoided; if this is not possible, then more gradual introduction to the new conditions can improve the chances of successful adaptation.