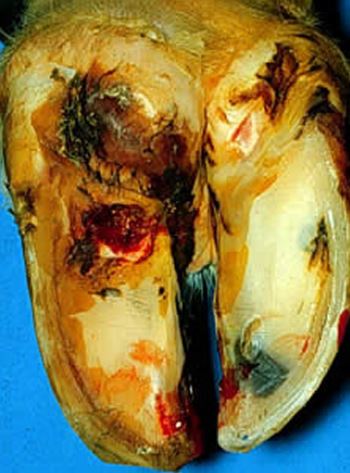 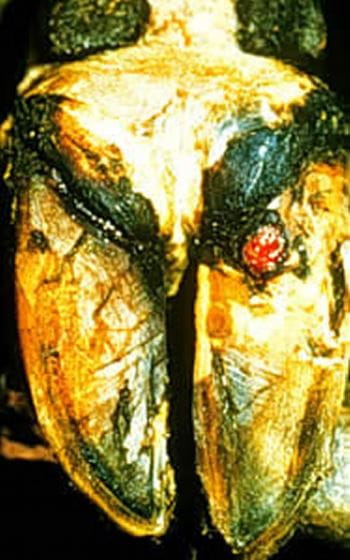 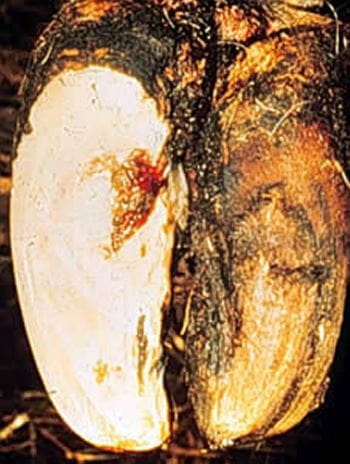 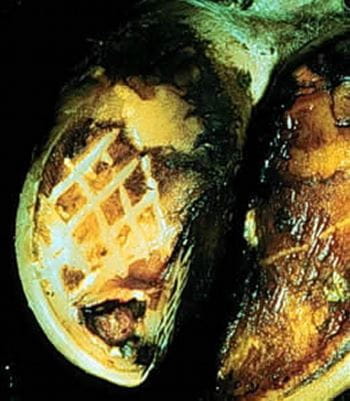 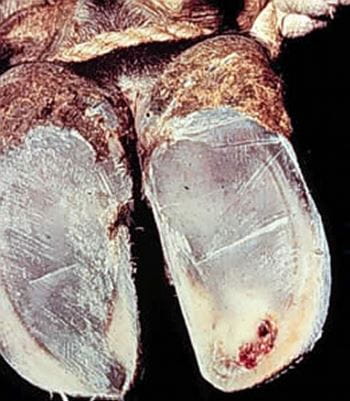 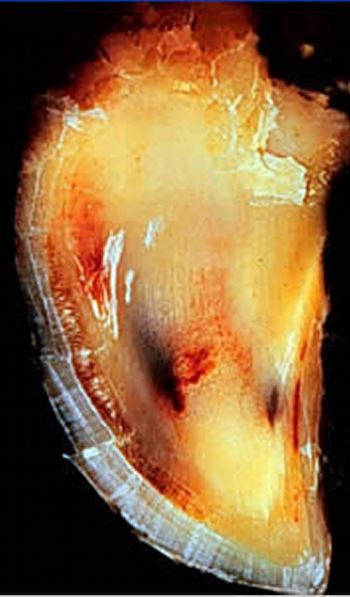 Sole ulcer is generally regarded as the most important, prevalent, and costly of the noninfectious lesions. All too frequently, it is the cause of culling. Sole ulcers commonly affect one or both lateral hind claws, predominantly in heavy, high-yielding dairy cattle kept under confined conditions. A sole ulcer is a circumscribed lesion located in the region of the sole/bulb junction, usually nearer the axial than abaxial margin. Damage to the dermis is associated with a circumscribed zone of localized hemorrhage and necrosis. The incidence is variable, but in some herds up to 40% of mature cows can be affected.

Recently, Treponema-like organisms have been identified in these lesions.

Sinking of the claw due to activation of matrix metalloproteinase, which is a feature of subclinical laminitis, is the major predisposing factor. As the space between the flexor process of the pedal bone narrows, the corium is crushed, causing ischemic necrosis and compromising horn production. This results in a hole forming in the sole. As the damaged corium undergoes repair, granulation tissues erupt through the hole in the sole. Because this condition is strongly associated with subclinical laminitis, some softening of the sole horn will occur. This increases the rate of horn wear. The sole horn also softens under very unhygienic conditions when horn is exposed to the fluid component in slurry.

Iatrogenic forms of the lesion are produced when inexperienced claw trimmers remove too much horn from beneath the heel (and/or the posterior region of the abaxial wall), resulting in abnormal pressure on the dermis. Excessive wear of the softened sole horn flattens and thins the sole.

Heel erosion is another potential contributing cause of a sole ulcer. Normally, weight is borne by the anticoncussive qualities of the bulb of the heel, but if heel erosion occurs, weight-bearing may be transferred forward to the region beneath the flexor process. Sometimes, a displaced pad of horn slips over to the vulnerable area, causing abnormal pressure over the flexor process of the distal phalanx.

The progress and severity of lameness are variable and often masked in bilateral cases, depending on the size of the lesion and extent of the secondary infection. Because the lateral hind digit is usually involved, the limb is often held slightly abducted with weight-bearing on the unaffected medial digit. In tie stalls, the hind toes may be rested on the edge of a curb in an attempt to relieve pressure on the heel-sole junction. On flat surfaces, an affected cow stands with the hindlimbs camped back. Some cows may shake the affected foot frequently, whereas those with bilateral lesions may continually shift weight from limb to limb and frequently lie down.

The earliest stages of this lesion may be discovered during routine claw trimming. As sole horn is removed from over the typical site, a hemorrhagic lesion may be exposed. The clinical lesion varies from a soft, slightly discolored area that may be painful under pressure to a distinct bright red knob of granulation tissue. This is often the stage at which lameness becomes severe enough to be noticed. Once the corium is exposed, infection can invade the deeper structures of the claw and spread proximally to involve the navicular bursa, resulting in necrosis of the flexor tendon and ligaments of the navicular bone. A retroarticular abscess may develop, which may be further complicated by infection of the distal interphalangeal joint (see Septic Arthritis of the Distal Interphalangeal Joint in Cattle Septic Arthritis of the Distal Interphalangeal Joint in Cattle Most frequently, one of the causal lesions is present and the transition from the initial lesion to the joint infection is readily apparent. However, when a swollen foot is treated before the... read more

). Rupture of the flexor tendon leads to dorsal rotation (upward) of the toe (“cocked toe”). In complicated cases, infection may progress up the deep flexor tendon sheath.

Treatment must be aimed at removing pressure from the affected area. Skillful therapeutic claw trimming is highly effective. This procedure lowers the entire bearing surface of the lateral claw, which transfers loading to the sound medial claw. Applying a “lift” has become the accepted treatment for this condition. The simplest form of lift is a wooden or rubber block glued or nailed to the unaffected medial claw, thereby removing all weight-bearing from the ulcer region. Recently, various models of easier-to-apply plastic slippers have been developed. Care must be taken when applying either a block or a slipper to avoid the sharp, hard, rear edge of the device from causing pressure under the sole. Blocks should be removed after ~1 mo to avoid causing damage to the sole.

Protruding granulation tissue need not be excised and must not be treated with any caustic agent, because this can retard healing. Bandages should not be applied, because this results in continued weight-bearing at the ulcer site. Furthermore, covering the lesion causes it to remain moist and promotes maceration and bacterial infection.

Many ulcers never fully resolve, and affected cows may have chronic, low-grade lameness and need corrective foot trimming 3–4 times/yr for their productive lives.

Because the development of sole ulcers is intimately related to subclinical laminitis, the latter should be investigated and appropriate control measures instituted (see Equine and bovine laminitis are distinctly different. Although acute laminitis occurs in both species and can be caused by grain overload, other etiologies can affect the equine laminae. A major... read more ).

Overview of Lameness in Goats

Overview of Ketosis in Cattle

Overview of Coccidiosis in Poultry