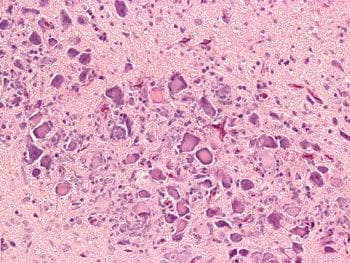 Avian encephalomyelitis, clinical signs
Avian encephalomyelitis is a viral infection affecting the CNS of several species of birds. Signs include tremors, ataxia, and weakness that progresses to paralysis. In severe outbreaks, morbidity and mortality may exceed 50%. Diagnosis is based on history, clinical signs, histopathology, and isolation of the virus. A live vaccine is available to prevent transmission and reduce egg losses.

Avian encephalomyelitis (AE) is a viral disease of the CNS of young chickens, turkeys, Japanese quail, pheasants, and pigeons. Turkeys are less susceptible to natural infection and generally develop a milder clinical disease than chickens. Ducklings and guinea fowl are susceptible to experimental infection.

AE is characterized by neurologic signs that result from infection of the CNS with an RNA virus. The virus species is Tremovirus A in the genus Tremovirus of the family Picornaviridae. Infection occurs via vertical and horizontal transmission. If a breeder flock becomes infected during egg production, the virus is vertically transmitted to the offspring, and a major outbreak occurs. The disease often appears in a series of flocks hatched from the infected breeder flock. Natural field strains of the virus are enterotropic and multiply in the intestine. Infected birds shed the virus in their feces for a few days to a few weeks, which serves to spread the infection to hatchmates. There is no convincing evidence that the virus persists in infected birds. AE virus is resistant to environmental conditions and may remain infectious for long periods.

Vertically infected chicks commonly show clinical signs of avian encephalomyelitis during the first week after hatching, although signs may be present in a few birds at hatching. Clinical signs appear later in hatchmates that are horizontally infected by the fecal-oral route. Vertical infection followed by horizontal infection causes a characteristic biphasic mortality pattern.

The main clinical signs of avian encephalomyelitis are ataxia and leg weakness that varies from sitting on hocks to paresis that progresses to paralysis and recumbency. Fine tremors of the head and neck are evident in some birds and are characteristic of the disease. They are responsible for the common name, epidemic tremors. Tremors vary in frequency and severity and are best seen after birds are disturbed or excited. This can easily be done by placing the bird on its back and letting it right itself. Cupping the bird in one's hands often results in a buzzing feeling because of rapid, fine tremors. Severely affected birds lay on their side and exhibit intermittent fine tremors of the head, neck, and legs.

Horizontally infected chicks usually show clinical signs at 2–4 weeks of age; thus, clinical disease progresses through the flock for the first few weeks, and the episode is usually over by the time the flock is ~4 weeks old. Morbidity and mortality rates vary and depend on the level of egg transmission and degree of immunity in the flock. In severe outbreaks, both morbidity and mortality may exceed 50%.

After 4 weeks of age, chickens are resistant to disease but not to infection. An exception occurs occasionally in older chickens after vaccination with chick-embryo–propagated vaccines in which the vaccine virus inadvertently becomes embryo-adapted during production of the vaccine. Chick-embryo-adapted strains are highly neurotropic and can cause clinical disease after parenteral administration. Affected birds exhibit typical neurologic signs like those seen in younger chicks.

No gross lesions are seen in the brain of birds infected with avian encephalomyelitis. Gray to white foci may be visible on cut surfaces of the muscle of the gizzard. Weeks after infection, opacity of eye lenses (cataracts) may occur in a small percentage of chickens that survive the infection. Microscopic lesions in the CNS are found in the brain (cerebral peduncle, cerebellum, brain stem) and spinal cord and consist of degeneration and necrosis of neurons, perivascular lymphocytic cuffing, and gliosis with formation of glial nodules. In the cerebellum, there are areas of necrosis or loss of Purkinje cells and replacement by glial nodules that extend into the molecular layer of the gray matter. Neuronal lesions of central chromatolysis, shrinkage and increased basophilia, satellitosis, and neuronophagia are best found in neuron clusters (nuclei) in the brain stem, arbor vitae of the cerebellum, and lateral horn (gray matter) of the spinal cord. Central chromatolysis of neurons is characterized by rounding of the cell contour and displacement of Nissl granules to the periphery. Dorsal root ganglia have multifocal nodular collections of lymphocytes.

A common microscopic lesion outside the CNS is diffuse or nodular lymphocytic infiltrates in the gizzard muscle, muscular layer of the esophagus and proventriculus, myocardium, and pancreas. Except for cataracts, microscopic lesions generally are not found in infected adults unless they are showing nervous signs, in which case they will have CNS lesions similar to those in young birds.

Diagnosis of avian encephalomyelitis is based on history, clinical signs, and characteristic histopathologic lesions in the brain and spinal cord. The diagnosis is best confirmed by isolation and identification of the virus. Tissues collected for virus isolation must include the brain and duodenum with the pancreas. Demonstration of AE virus antigen in the brain, spinal cord, and other tissues by immunofluorescent and immunohistochemical staining is a reliable method of diagnosis. The major differential diagnosis for neurologic signs in very young chicks is bacterial or mycotic encephalitis. Rickets and nutritional encephalomalacia are next in the list of differential diagnoses, although the clinical manifestations of these diseases differ from those in AE. In adults, serologic testing of acute and convalescent sera to demonstrate an increase in antibody titers helps establish a diagnosis.

Immunization of broiler breeder pullets with a commercial chick-embryo-propagated live vaccine prevents vertical transmission of the AE virus and provides progeny with maternal immunity. Vaccine is administered to broiler breeders 8 weeks or older but at least 4 weeks before start of lay. Vaccination of table-egg flocks is also advisable to prevent decreases in egg production. AE vaccine is usually combined with fowlpox vaccine and given to chickens by wing-web stab. Also available is a live fowlpox-vectored infectious laryngotracheitis and AE combination vaccine. Chicks and turkey poults with neurologic signs are ordinarily euthanized because they rarely recover.

AE virus does not cause disease in people or other mammals.

Botulism in Poultry
Others also read