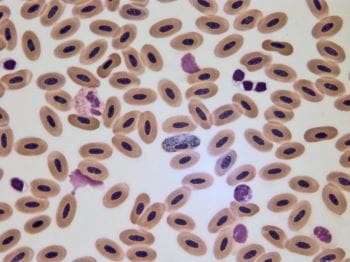 Haemoproteus, goose
Infections with Haemoproteus spp rarely cause clinical disease in quail and turkeys. Anemia, depression, and lameness can be observed. Diagnosis is made using blood smears, tissue cytology, histopathology, and/or PCR. No treatment is approved for poultry. Prevention focuses on limiting insect vectors.

Haemoproteus spp is the most common blood parasite in birds, especially nondomestic birds. More than 120 species have been reported. Haemoproteus spp are found in free-living ducks, quail, and turkeys but are rare to absent in commercial flocks, probably because of limited vector exposure or very specific feeding habits of Culicoides spp and hippoboscid flies, the invertebrate vectors. Haemoproteus is considered nonpathogenic in most avian species.

In poultry, infection with H lophortyx in bobwhite quail can cause clinical disease and increased mortality, with as much as 20% flock loss. Quail 5–10 weeks old were usually affected, and clinical signs included reluctance to move, prostration, and death. Gross lesions included congested spleen and liver and hemorrhagic streaks in the muscles. Histology revealed myositis with megaloschizonts in the musculature, especially of the legs and back, and hemosiderin accumulation in the splenic macrophages. Experimental infection in turkeys with H meleagridis resulted in lameness, diarrhea, anorexia, and depression. Histologic lesions were associated mainly with megaloschizont development in the musculature. Infection in racing pigeons with H columbae or H saccharovi (called pigeon malaria) is commonly asymptomatic but often blamed for poor performances that are due to other diseases or inadequate housing and management. Clinical disease in Columbiformes is rare.

Diagnosis is made by examination of stained blood smears and observation of large, pigmented gametocytes in mature RBCs that partially or occasionally completely encircle the nucleus without displacing it. Merozoites are not seen in the peripheral blood. Schizogony within the endothelial cells of the lung, liver, and spleen may be seen histologically. PCR tests for Haemoproteus have been developed. Little is known about effective treatment. No drug is approved for commercial use. Antimalarial drugs reduce the parasitemia but do not eliminate the parasite. Chloroquine, primaquine, quinacrine, and buparvaquone have been used in pigeons. Combinations of chloroquine and primaquine, or chloroquine and mefloquine, have been used to treat owls. Treatment is not recommended in asymptomatic birds. Measures to control invertebrate vectors, such as screening of aviaries, help prevent transmission and heavy infections.

Leucocytozoonosis in Poultry
Others also read

Flies, Gnats, and Mosquitoes of Poultry