Other Bloodborne Organisms in Poultry 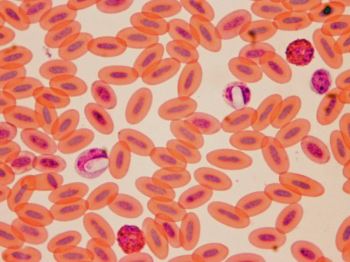 Trypanosomes have been described in several avian species but rarely if ever cause clinical disease. They are more commonly identified in organ smears, especially bone marrow, than in peripheral blood, and can be cultured. Invertebrate hosts are thought to be any of several bloodsucking insects. Treatment is not warranted.

Babesia spp are uncommon, nonpigmented, pyriform-shaped, erythrocytic protozoan parasites of birds. Natural infections of penguins, falcons, cranes, and several other avian species occur. Ticks are considered to be the invertebrate hosts. V, X, or fan shapes characterize dividing forms. Knowledge regarding their significance, treatment, or control in birds is limited. Only B shortti, which rarely occurs in falconiformes, has been reported to be pathogenic. Reported treatment in infected falcons was IM administration of 2 or 3 doses of imidocarb dipropionate (5–13 mg/kg) 1 week apart.

Hepatozoon is a protozoan parasite infrequently identified in birds. Prevalence in wild birds is 2%–5%. It produces relatively large, nonpigmented, elongated gametocytes with rounded ends that can be found in WBCs. Gametocytes are usually not located within an indentation of the nucleus, whereas Isospora is oval and partially encircled by the nucleus. The life cycle in birds is uncertain, but argasid ticks and fleas have been identified as probable vectors for Hepatozoon infecting swallows. Ixodes ticks, mites, and other arthropods may also be involved. Hepatozoon spp are not known to be pathogenic.

Isosporiasis is a disease of passerine birds caused by infection with coccidian protozoan in the genusIsospora. Canaries, finches, sparrows, and species of the Sturnidae family (starlings, mynahs) are most often affected. Very rare cases of infection have also been reported in raptors. Poultry are not known to be affected.