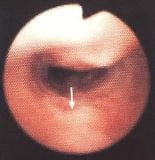 Aspiration pneumonia is a lung disease characterized by inflammation and necrosis due to inhalation of foreign material. The most common material aspirated in large animals is a large volume of liquid, due to weakness from a different primary problem or iatrogenically during oral administration of fluids or other treatments. Aspiration may also occur during induction of general anesthesia if the airway is inadequately protected. The severity of the inflammatory response and key signs depend on the type and volume of material aspirated and the distribution of aspirated material in the lungs.

In severe cases in which large volumes of liquid have been aspirated, death can occur swiftly. Other cases present with clinical signs consistent with cranioventral bronchopneumonia Bacterial Pneumonia in Cattle with Bovine Respiratory Disease Complex Mannheimia haemolytica serotype 1 is the bacterial pathogen most frequently isolated from the lungs of recently weaned feedlot cattle with bovine respiratory disease (BRD) and in dairy... read more

Key diagnostic tests include a complete history, physical examination with auscultation and use of a rebreathing bag, and Diagnostic imaging Radiography of Animals Radiography (generation of transmission planar images) is one of the most commonly used diagnostic tools in veterinary practice even though other imaging modalities such as ultrasonography,... read more

of the thorax (radiography Radiography of Animals Radiography (generation of transmission planar images) is one of the most commonly used diagnostic tools in veterinary practice even though other imaging modalities such as ultrasonography,... read more

, ultrasonography Ultrasonography in Animals Ultrasonography is the second most commonly used imaging format in veterinary practice. It uses ultrasonic sound waves in the frequency range of 1.5–15 megahertz (MHz) to create images of body... read more , and computed tomography Computed Tomography in Animals In computed tomography (CT), an x-ray tube moves around the body and continuously projects a thin fan of x-rays through the body. Electronic detectors opposite the tube continuously monitor... read more

, as indicated). Pulmonary tissue damage may not be evident on plain radiographs for several days after aspiration. Definitive diagnostic tests may also include trans- or endotracheal wash specimens for cytologic testing and aerobic and anaerobic bacterial culture and sensitivity testing. Ancillary diagnostics could include a CBC, serum biochemical analysis and arterial blood gas analysis.

Treatment mainstays start with administration of broad-spectrum(including anaerobic) antimicrobial treatment for a minimum of 10–14 days. Supportive care, including anti-inflammatory medications, oral or intravenous fluids, and nutritional supplementation, may be needed and is assessed on a case-by-case basis. Some patients require oxygen supplementation, placement of a chest tube, and more invasive measures.

Prognosis is guarded to grave and depends on how quickly treatment is instituted and how extensive this is.

Inappropriate administration of therapeutic agents is a common cause of aspiration pneumonia in large animals and more common than in dogs and cats. Liquids given by via nasogastric tube or oral dose syringe should not be delivered faster than the animal can swallow. Oral fluids or treatments should be administered to ruminants with an oral esophageal tube that is passed into the rumen; the location should be checked via auscultation.

Oral fluids and treatments administered to horses by means of a nasogastric tube should be done only by a veterinarian and with the horse properly restrained. In horses, negative pressure should be present while passing the nasogastric tube down the esophagus. If the tube is passed into the trachea, negative pressure will not develop, and the horse should cough. Additionally, it is advisable to start oral administration with water only to ensure the nasogastric tube is in the stomach and not the lung. Horses should cough if fluid is delivered into the lung.

In sheep, poor dipping technique with repeated immersion of the patient’s head may cause aspiration of fluid. Calves and lambs may inhale inflammatory debris if affected with diphtheritic stomatitis/laryngitis. The muscles of deglutition may be affected in lambs with nutritional myopathy. Pigs fed fine particulate food in dry environments may inhale feed granules.

may develop aspiration pneumonia due to central nervous system dysfunction. Both ruminant and equine neonates may aspirate meconium in situations of high fetal stress or dystocia. Also associated with dystocia and fetal metabolic acidosis, hypoxia-induced encephalopathy Neonatal Encephalopathy in Foals Neonatal encephalopathy (NE) is a common, noninfectious CNS disorder of neonatal foals, resulting in clinical signs such as lethargy, inappropriate behavior (failure to find the udder and suckle... read more can result in aspiration pneumonia from weakness or inability to protect the airway during nursing. Bacteria in aspirated material may initiate acute infection, or secondary infection later in the disease course. Bacterial infections are commonly mixed (aerobic and anaerobic bacterial species). Meconium aspiration in neonates may result in secondary bacterial infections, but the majority of tissue damage is typically from direct contact with meconium, which creates a chemical pneumonitis.

A history suggesting recent (1-2 days) aspiration of foreign material is of greatest value for a diagnosis of aspiration pneumonia. Aspiration is often due to fluids or other oral treatment administered with inappropriate technique or with sudden movement of the animal due to ineffective restraint during treatment. Aspiration may also occur during induction of general anesthesia if the airway is inadequately protected. Affected animals separate from the rest of the group and present with pyrexia 104°–105°F (40°–40.5°C) early in disease; however, fever may not be detected later in the course of disease, especially in patients with severe dehydration. Animals often show visible signs of pain, such as arched back, and reluctance to move. Animals are also typically anorexic, mentally dull, and have dark red mucous membranes suggestive of endotoxemia. They can present with increased respiratory rate (>40–60 breaths/minute), with a shallow abdominal component or extended head and neck and fulminant respiratory distress. Respiratory disease is often associated with a purulent nasal discharge that sometimes is tinged reddish brown or green, with a fetid smell. Milk yield is greatly reduced sometimes to zero in lactating animals. Thoracic auscultation reveals reduced lung sounds over affected consolidated lung regions, with increased breath sounds over normal lung. Lung sounds are especially decreased in cases with accumulation of pleural fluid.

Thoracic imaging in the field can be accomplished with use of 5-MHz linear reproductive ultrasonography probe. Typical lesions include consolidated or hepatized lung parenchyma primarily in the cranioventral lung fields and hyperechoic pleural fluid. Thoracic radiographs may show consolidated lung parenchyma and bronchoalveolar Roentgen signs; however, pleural fluid may distort images. In mild to moderate cases of aspiration pneumonia, lesions may not be immediately visible with radiography Radiography of Animals Radiography (generation of transmission planar images) is one of the most commonly used diagnostic tools in veterinary practice even though other imaging modalities such as ultrasonography,... read more

or ultrasonography Ultrasonography in Animals Ultrasonography is the second most commonly used imaging format in veterinary practice. It uses ultrasonic sound waves in the frequency range of 1.5–15 megahertz (MHz) to create images of body... read more , but this should not stop aggressive treatment of suspect cases. Computed tomography Computed Tomography in Animals In computed tomography (CT), an x-ray tube moves around the body and continuously projects a thin fan of x-rays through the body. Electronic detectors opposite the tube continuously monitor... read more

In cows that become cast due to hypocalcemia and subsequently aspirate, endotoxemia is usually fatal within 1–2 days. In ruminants or horses that aspirate oral fluids or treatments, clinical signs of disease can take longer to become apparent, especially if a small amount of liquid was aspirated. However, if aspiration is witnessed during oral administration of treatments or induction of general anesthesia, the patient should be treated as aggressively as possible with antimicrobials and supportive care for the best possible prognosis.

Superficial consolidated lung and overlying lesions of fibrous pleurisy can readily be identified on ultrasound examination by use of either linear or sector probes connected to 5-MHz machines; pleuritic friction rubs are not audible on auscultation. Cough, dyspnea, tachypnea, or exercise intolerance are seen most frequently. Thoracic radiographs generally show a bronchoalveolar pattern in gravity-dependent ventral lung lobes (right cranial and middle and left cranial lobes); however, radiographic changes may not be seen until 24 hours after acute aspiration.

Aspiration pneumonia is usually in the cranioventral lobes of the lung; it may be unilateral in animals in which lateral recumbency was the cause of aspiration, or bilateral and centered on airways. Aspiration in a standing patient often involves the right cranial and right middle lung lobes, because they are the first bronchial branches off the trachea. In early stages, the lungs are markedly congested with areas of interlobular edema. Bronchi are hyperemic and full of froth. The pneumonic areas tend to be cone-shaped, with the base toward the pleura. Suppuration and necrosis follow. The foci become consolidated and soft or liquefied, reddish brown, and foul smelling. There usually is an acute fibrinous pleuritis, often with pleural exudate. Tissues removed during necropsy examination do not deflate and do not float in formalin. Patients that survive develop chronic abscesses and fibrous adhesions between the visceral and parietal pleura. These patients typically have lower respiratory capabilities, which diminishes their ability for heat abatement and their athletic capacity.

Prevention and Treatment of Aspiration Pneumonia in Large Animals

Aspiration pneumonia is prevented primarily by preventing the primary disease that could cause weakness or recumbency. In cattle, this can be from traumatic injury, toxemia (mastitis Mastitis in Large Animals This newly calved heifer died from peracute, severe Staphylococcus aureus infection. Mastitis, or inflammation of the mammary gland, is predominantly caused by bacterial pathogens and... read more

, metritis Uterine Diseases in Production Animals ), or metabolic deficiencies that result in downer cow syndrome Bovine Secondary Recumbency Bovine secondary recumbency is defined as the inability of cattle to rise and stand for a period of at least 12–24 hours, resulting from the delayed or unsuccessful treatment of a different... read more (eg, calcium, potassium, magnesium, phosphorus). Neonates with hypoxia-induced encephalopathy or meconium aspiration are at high risk of aspiration pneumonia. Most commonly, aspiration pneumonia is iatrogenic in origin and can be prevented with proper training of personnel who administer oral fluids and treatments, as well as ensuring the patient is adequately restrained for treatment.

The main focus of treatment is to treat early and aggressively with broad-spectrum antimicrobials that include anaerobic activity. For food animals, drug choices include penicillin or oxytetracycline. More options are available for horses, including metronidazole and chloramphenicol. Antimicrobial choice can be directed further with culture and susceptibility results from trans- or endotracheal wash samples. Antimicrobial coverage should be provided for, at minimum, 10–14 days and is likely to be indicated for 21–28 days.

Supportive care is also important to maintain hydration and includes nutritional support. Oral or intravenous fluids may be indicated.

Anti-inflammatory therapy is also indicated for pain and to combat toxemia.

Humidified nasal oxygen may be needed in severe cases or in neonates, and is indicated when hypoxemia is diagnosed via arterial blood gas analysis.

Affected animals will have difficulty with heat abatement when ambient temperatures are high; well-ventilated or air-conditioned housing may be needed.

Athletic animals should be rested and not return to training or competition without veterinary examination.