Medically Reviewed Feb 2022 | Modified Oct 2022
Feline respiratory disease complex is typically manifested by clinical signs of the eyes, nose, and mouth (rhinosinusitis Rhinitis and Sinusitis in Dogs and Cats Rhinitis is defined as inflammation of the mucous membranes of the nose. In dogs and cats, it may be acute or chronic and may have a viral, bacterial, or allergic cause. Sinusitis is usually... read more 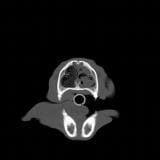 , sneezing, conjunctivitis, lacrimation, salivation, and oral ulcerations, as well as fever. The principal component infections are feline viral rhinotracheitis (FVR; feline herpesvirus type 1), feline calicivirus (FCV), Chlamydia felis, and Mycoplasma felis. The disease complex is usually self-limiting but can be complicated by secondary bacterial infections. Diagnosis is based on clinical signs and laboratory testing to isolate and identify the agent(s). Treatment is supportive, with antimicrobial treatment for secondary bacterial infection. Prevention is by vaccination.

Feline respiratory disease complex includes those illnesses typified by rhinosinusitis Rhinitis and Sinusitis in Dogs and Cats Rhinitis is defined as inflammation of the mucous membranes of the nose. In dogs and cats, it may be acute or chronic and may have a viral, bacterial, or allergic cause. Sinusitis is usually... read more

FVR and caliciviruses are host-specific and pose no known human risk. Human conjunctivitis caused by the feline chlamydial agent has been reported.

Most acute feline upper respiratory infections are caused by FVR virus, although FCV may be more prevalent in some populations. Dual infections with these viruses may occur. Other organisms such as C felis, Mycoplasma spp, and reoviruses are believed to account for most of the remaining infections or further complicate FVR or FCV infection. Concurrent Bartonella henselae also may further complicate infection.

Natural transmission of these agents occurs via aerosol droplets and fomites, which can be carried to a susceptible cat by a handler. Convalescent cats may harbor virus for many months. Calicivirus is shed continually, while infectious FVR virus is released intermittently. Stress may precipitate a secondary course of illness. The incubation period is 2–6 days for FVR and FCV, and 5–10 days for pneumonitis.

The onset of illness is marked by fever, frequent sneezing, nasal discharge (mucopurulent or serous), conjunctivitis, rhinitis, and salivation. The fever may reach 105°F (40.5°C) but subsides and tends to fluctuate from normal to 103°F (39°C). The cat may become anorectic and hypersalivate. Cats may develop ulcerative keratitis, epiphora, chemosis, blepharospasm, or conjunctival hyperemia; severely debilitated cats may develop ulcerative stomatitis. Signs may persist for 5–10 days in milder cases and as long as 6 weeks in severe cases. Generally, the mortality is low and prognosis good because the disease is usually self-limiting.

FVR infection often is complicated by secondary bacterial infections; abortions and generalized infections also have been associated with disease. FVR infections can cause osteolytic changes to the nasal turbinates and lead to longterm changes in the nasal cavity, chronic rhinitis, and predisposition to infection.

There are many serologically related strains of feline caliciviruses. They appear to have a predilection for the epithelium of the oral cavity and the deep tissues of the lungs. Some caliciviruses are nonpathogenic. Some induce little more than salivation and ulceration of the tongue, hard palate, or nostrils; others produce pulmonary edema and interstitial pneumonia. Clinically, it is often impossible to differentiate FVR from FCV infection. Two strains may produce a transient “limping syndrome” without signs of oral ulceration or pneumonia Pneumonia in Dogs and Cats Pneumonia is an inflammation of the pulmonary parenchyma that results in respiratory disturbance. It can be caused by a variety of organisms, including viruses, bacteria, fungi, parasites, and... read more . These strains produce a transient fever, alternating leg lameness, and pain on palpation of affected joints. Signs occur most often in 8- to 12-week-old kittens and usually resolve without treatment. The syndrome may occur in kittens vaccinated against FCV; no vaccine protects against both strains that produce the “limping syndrome.”

Calicivirus has also been found in cats with lymphocytic-plasmacytic gingivitis and stomatitis Feline Stomatitis Inflammation of the oral tissues can be either primary or secondary. Inflammation in the oral cavity may affect the gingiva (gingivitis), nongingival tissues of the periodontium (periodontitis)... read more

. The superficial lesions heal rapidly, and appetite returns 2–3 days after onset. The clinical course usually is 7–10 days. An acute febrile response, inappetence, and depression are common signs. Serous rhinitis Rhinitis and Sinusitis in Dogs and Cats Rhinitis is defined as inflammation of the mucous membranes of the nose. In dogs and cats, it may be acute or chronic and may have a viral, bacterial, or allergic cause. Sinusitis is usually... read more

and conjunctivitis also can occur. Persistent calicivirus infections have been linked to chronic ulcerative and proliferative lymphoplasmacytic stomatitis.

Mycoplasma spp may infect the eyes and upper respiratory passages, characteristically producing severe edema of the conjunctiva and a less severe rhinitis.

The occurrence of severe viral upper respiratory disease is rare in adult, properly vaccinated cats. These cats should be tested for other upper respiratory diseases and, less commonly, concurrent immunodeficiency diseases, including feline leukemia virus Feline Leukemia Virus Disease Feline leukemia virus (FeLV) is one of the most common infectious causes of disease of cats globally. Infection with FeLV can cause a variety of clinical signs, impacting a cat's longevity and... read more

Lesions generally are confined to the respiratory tract, conjunctivae, and oral cavity. In FVR infection, the conjunctivae and nasal mucous membranes are reddened, swollen, and covered with a serous to purulent exudate. In severe cases, focal necrosis of these membranes may be seen. The larynx and trachea may be mildly inflamed. The lungs may be congested, with small areas of consolidation; however, pulmonary changes are rarely remarkable in FVR infection except possibly in stressed, young kittens. The characteristic histologic lesion of FVR infection is the acidophilic intranuclear inclusion body. During the early stage of illness, inclusions may be present in sites of epithelial necrosis on the tongue, nasal membranes, tonsils, epiglottis, trachea, and nictitating membranes. Inclusion bodies are transitory. Inclusions are not seen in calicivirus infections.

The characteristic lesion caused by FCV is ulceration of the oral mucosa. Lesions on the tongue or hard palate initially may appear as vesicles, which subsequently rupture. Ulcerations are occasionally found on the epithelium covering the median nasal septum. The more virulent caliciviruses destroy epithelial cells of the bronchioles and alveoli, which causes acute pulmonary edema that progresses through seropurulent bronchiolar hyperplasia and interstitial pneumonia.

Early in the clinical course of feline pneumonitis, the causative organism may be identified in Giemsa-stained conjunctival smears or scrapings. The elementary bodies are intracytoplasmic. Mycoplasmas occur as extracellular coccoid bodies often seen on the surface of conjunctival epithelial cells.

The presumptive diagnosis is based on such typical signs as sneezing, conjunctivitis Chlamydial Conjunctivitis , rhinitis Rhinitis and Sinusitis in Dogs and Cats Rhinitis is defined as inflammation of the mucous membranes of the nose. In dogs and cats, it may be acute or chronic and may have a viral, bacterial, or allergic cause. Sinusitis is usually... read more

, lacrimation, salivation, oral ulcers, and, if severe enough, respiratory distress and pneumonia Pneumonia in Dogs and Cats Pneumonia is an inflammation of the pulmonary parenchyma that results in respiratory disturbance. It can be caused by a variety of organisms, including viruses, bacteria, fungi, parasites, and... read more . FVR infection tends to affect the conjunctivae and nasal passages, caliciviruses the oral mucosa and lower respiratory tract. Chlamydial infections result in chronic, low-grade conjunctivitis. These characteristics may be obscured in mixed infections. Cytologic examination of Giemsa-stained conjunctival scrapings is of value for the identification of chlamydiae and mycoplasmas. A definitive diagnosis is based on isolation and identification of the agent. The oropharyngeal mucosa, external nares, and conjunctival sacs are the preferred sampling sites. However, diagnosis of FVR infection may be difficult, because virus is shed intermittently and because seroprevalence and virus isolation rates are similar in ill and clinically normal cats. Samples of ocular, nasal, or caudal pharyngeal secretions for PCR assay may help establish a diagnosis and causative agent.

Treatment is largely symptomatic and supportive, but broad-spectrum antimicrobials are useful against secondary bacterial infections (eg, amoxicillin with clavulanic acid, cephalosporins, trimethoprim-sulfa, fluoroquinolones, tetracyclines, chloramphenicol) as well as directly against C felis and M felis. Tetracyclines and fluoroquinolones are the most effective against C felis and M felis. Nasal and ocular discharges should be removed frequently for the comfort of the cat. Nebulization or saline nose drops may aid in removal of tenacious secretions. Nose drops containing a vasoconstrictor (eg, two drops of ephedrine sulfate [0.25% solution] in each nostril, twice a day) and antibiotics may help reduce the amount of nasal exudate.

If corneal ulcers develop in FVR infections (herpetic keratitis), topical antiviral ointments containing idoxuridine, trifluridine, or vidarabine every 4 hours should be considered. Lysine (250 mg, PO, 2 to 3 times a day) interferes with herpetic viral replication and may reduce the severity of FVR infection. If dyspnea is severe, the cat may require oxygen supplementation in an oxygen cage. Fluids may be indicated to correct dehydration, and assisted feeding may be necessary, either by syringe feeding or, in severely affected cats, by a feeding tube (nasoesophageal, nasogastric, or esophagostomy).

Several intranasal modified-live virus FVR-FCV vaccines are available. Cats >9 weeks old should be vaccinated twice, with a 3-week interval. Kittens should be vaccinated at intervals of 3–4 weeks until they are ≥12 weeks old. In adult cats, revaccination with a single dose every 1–3 years is indicated.

Vaccines containing either chick-embryo- or cell-line-origin C felis are administered parenterally. A single dose is recommended for cats >12 weeks old; younger kittens should be revaccinated when they reach 16 weeks. All should be revaccinated annually. These vaccines are indicated in catteries or on premises where C felis infection has been confirmed. The chlamydial vaccines are available in combination with FVR-FCV and panleukopenia vaccines. Systematic vaccination and control of environmental factors (such as exposure to sick cats, overcrowding, and stress) provide good protection against upper respiratory disease.