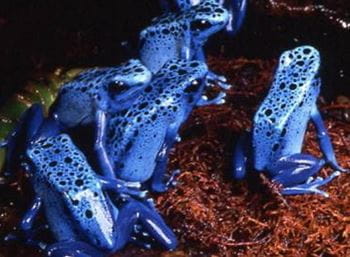 Similarities and Differences Between Frogs and Toads

Some Common Salamanders and Newts

). The order Gymnophiona is made up of >100 species of caecilians. Caecilians are wormlike amphibians that inhabit both aquatic and terrestrial environments. They are rarely kept in the care of humans. Amphibian populations are declining due to a complex mix of factors including habitat loss, climate change, infectious disease outbreaks, toxin exposure, and pollution.

Description and Physical Characteristics of Amphibians

Amphibians inhabit a wide range of ecological systems and live on all continents except Antarctica. The word amphibian comes from the Greek word for "double-life," because most amphibians start their larval life cycle stage in water, breathing through gills, before completing metamorphosis to become lung-breathing terrestrial adults. However, marked variation in the respiratory system exists between species and life stages, including respiration via skin, mucous membranes, gills, and lungs.

Amphibians have a nonkeratinized, thin epidermis, allowing for transdermal respiration, fluid absorption, and osmoregulation. This provides unique fluid and medication delivery options via immersion treatment in many species. The subcutaneous space is loosely connected and contains large lymphatic sacs. Within the lymphatic system, there are lymphatic hearts segmentally arranged that facilitate lymph movement toward the renal portal veins, where it rejoins systemic circulation.

All postmetamorphic amphibians are carnivores, although the diet of larval anurans is extremely variable. Most anuran species need prey movement to trigger feeding behavior; in contrast, Caudata and Gymnophiona use olfactory cues, touch, and movement to locate food. Fat storage occurs in the gonadal fat bodies for most species, which have finger-like projections in the coelomic cavity. Frogs have teeth only in the upper jaw; toads have none. Teeth are not generally used for chewing but simply for prehending food. These animals swallow their food whole. Full neoteny is used to describe species that remain in their larval form for most of their life, such as the axolotl (Ambystoma mexicanum). Sexually mature adults of this species externally resemble gilled larvae. Because neotenic species do not undergo metamorphosis, they must remain permanently in an aquatic environment. The amphibian immune system is poorly understood for the axolotl.

Amphibians have paired mesonephric kidneys and excrete nitrogen waste primarily as urea (during the aquatic and larval stages). Uric acid and urea are also produced by some terrestrial and arboreal species. The musculoskeletal system of anurans is uniquely modified with a pelvic girdle attached to ribs and vertebrae, known as the urostyle, to assist with saltatory (hopping) locomotion.

Most caudatan species have a notable amount of cartilage on joint surfaces. On radiographs, this should not be misinterpreted as metabolic bone disease Metabolic Bone Diseases Systemic gout due to severe renal disease in a chameleon. Note the pale, swollen kidney (arrow), and typical gout tophus (insert, 400X, H&E). Gout is seen in all orders of reptiles; visceral... read more

Endolymphatic sacs are unique structures found down the entire length of the spinal column. These sacs are extensions of the inner ear, contain crystals of calcium carbonate, and function as a calcium storage site. They should not be confused with pathological conditions.