Tumors of Melanocytic Origin in Animals

Tumors of melanocytic origin are most common in dogs, gray horses, and miniature pigs; uncommon in goats and cattle; and rare in cats and sheep. The terminology used to describe melanocytic lesions in veterinary medicine is different from that used in human dermatology. In animals, the terms melanocytoma and malignant melanoma are used to describe benign and malignant melanocytic proliferations, respectively. In humans, a benign melanocytic proliferation (whether congenital or acquired) is called a nevus, and the term melanoma, by definition, refers to a malignancy (ie, in people, there are no benign melanomas). In addition, although solar injury is a common cause of melanocytic tumors in people, actinic damage is seldom associated with development of analogous tumors in domestic animals.

Tumors of Melanocytic Origin in Dogs

Melanocytomas of the skin are diagnosed much more frequently than malignant melanomas. They most commonly develop on the head and forelimbs in middle-aged or older dogs. There may be a predilection for males. Miniature and Standard Schnauzers, Doberman Pinschers, Golden Retrievers, Irish Setters, and Vizslas are the breeds in which these tumors are most commonly recognized. They can appear as macules or patches, as papules or plaques, or as elevated, occasionally pedunculated masses. Most have a pigmented surface. Although generally solitary, lesions may be multiple, especially in the breeds at risk. These tumors are benign, and complete excision is curative.

Malignant melanomas most commonly develop in dogs somewhat older than those that develop melanocytomas. Miniature and Standard Schnauzers and Scottish Terriers are most at risk.

The mucocutaneous junctions of the lips, in the oral cavity Malignant Oral Tumors Peripheral odontogenic fibromas (previously called fibromatous epulis or ossifying epulis) are the most common benign oral tumors. These firm masses involve the gingival tissue adjacent to a... read more

, and in the nail beds are the most common sites of malignant melanoma development. Malignant melanomas of haired skin are rare, and most arise on the ventral abdomen and the scrotum. Males are affected more commonly than females. Most malignant melanomas appear as raised, generally ulcerated nodules that are variably pigmented depending on the melanin content; some malignant melanomas are amelanotic. When present on the mucocutaneous regions of the lip, the tumors may be pedunculated with a papillated surface; when present in the nail bed, they appear as swellings of the digit, often with loss of the nail and destruction of underlying bone, mimicking osteomyelitis Osteomyelitis in Dogs and Cats Osteomyelitis of the distal phalanx in a dog, characterized by severe loss of bone and soft tissue swelling. Inflammation and infection of the medullary cavity, cortex, and periosteum of bone... read more

Whenever a toe is festering in an older dog, radiographs and a deep punch biopsy that includes bone are indicated for diagnosis. Canine malignant melanomas are locally aggressive and have a high potential for metastasis; however, there is considerable variability in reported survival times. Reported median survival times for dogs with oral malignant melanomas treated with definitive surgery alone are 511 days for WHO stage I disease, 324 days for stage II, and 336 days for stage III disease. A comprehensive study found that up to 32% of oral melanocytic tumors in dogs exhibited less aggressive biological behavior, which emphasizes the need to accurately classify them in clinical trials.

Treatment for a malignant melanoma generally consists of complete excision with wide margins; however, the infiltrative nature of the tumor may make achieving adequate margins difficult. In these cases, surgery may need to be combined with radiation therapy or electrochemotherapy. When present on the digits, amputation is indicated; when present on the mandible, a hemimandibulectomy may allow for complete excision with adequate margins and an acceptable postsurgical cosmetic appearance and survival time. Lesions at rostral locations on the maxilla or mandible allowed the best survival times of 10.9 months in one study.[ 1 References Tumors of melanocytic origin are most common in dogs, gray horses, and miniature pigs; uncommon in goats and cattle; and rare in cats and sheep. The terminology used to describe melanocytic... read more 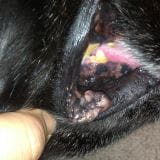 Melanomas are generally considered insensitive to radiation therapy. Chemotherapy for measurable disease has been disappointing and short-lived, with carboplatin providing the best response rate of 28%. The use of genetic testing for tumor-specific targeted therapy, combined with immunotherapy, may make a difference. Overall survival times range from 1–36 months, indicating that individual variations in host defense mechanisms and aggressiveness of the tumor may play a role in establishing a prognosis. The nuclear protein Ki67 has been established as a highly sensitive and specific immunohistochemical marker for predicting the outcome of oral malignant melanoma, with indices >19.5 corresponding to shorter survival times. A mitotic index >4 mitotic figures/10 high-power fields and a nuclear atypia score of >30% also indicate poor survival times. In one study of 117 dogs with digit masses, 24 had melanoma and a median survival time of 12 months, with 42% alive at 1 year and 13% alive at 2 years.[ 2 References Tumors of melanocytic origin are most common in dogs, gray horses, and miniature pigs; uncommon in goats and cattle; and rare in cats and sheep. The terminology used to describe melanocytic... read more

A series of novel xenogeneic gene therapy vaccinations using plasmid DNA encoding human tyrosinase can induce an immune response in dogs, resulting in antibody and cytotoxic T-cell responses that may shrink their melanomas. A canine melanoma vaccine has been shown to have potential therapeutic value for dogs as an adjuvant therapy for completely removed oral melanoma and for some advanced malignant melanoma cases in clinical trials in the New York area. It was conditionally licensed in the US in 2007; however, no benefit was found in several studies that were retrospective and lacked a control group. One such study followed 23 vaccinated dogs and 17 nonvaccinated dogs in Michigan. Clinical trials using radiation therapy Radiation Therapy or masitinib in combination with the canine melanoma vaccine in dogs with melanomas expressing mutated c-Kit, and another study that adds doxorubicin for nonmutated c-Kit, were evaluated for efficacy and shown promise. Chondroitin sulfate proteoglycan-4 is an immunohistochemical biomarker and a potential immunotherapeutic target for canine malignant melanoma, as in humans. Autologous and allogeneic tumor cell vaccines and intralesional injections with immunological adjuvants may also be helpful and may be used in combination with the USDA-approved targeted DNA canine melanoma vaccine.

Tumors of Melanocytic Origin in Cats

Cutaneous melanocytic neoplasms are uncommon and most often identified on the head (especially the pinnae), neck, and distal extremities in middle-aged or older cats. An association with the oral cavity and subungual regions is less well defined than in dogs, and a higher percentage are malignant. Excision is the treatment of choice. The therapeutic melanoma vaccine developed for use in dogs appears to be safe for use in cats.

Tumors of Melanocytic Origin in Horses

Most melanocytic neoplasms are in gray horses, in which the coat turns gray (or white) with age. They are especially common in Lipizzaners, Arabians, and Percherons, and 80% of gray or white horses of these breeds may be affected. They are generally recognized in older horses but usually begin their development when animals are 3–4 years old.

The perineum and the base of the tail are the most common sites of development; however, these tumors may develop in any location, including the parotid area. The tumors are often multiple and may appear as coalescent, frequently pedunculated nodules that often extend in a linear arrangement up the tail base. They increase in size and number over time. Although most are benign, invasive variants, some with metastatic potential, can develop. Most are black on cross-section. Many gray horses have evidence of lymph node involvement; however, there is debate as to whether this represents metastasis or whether the intranodal melanocytes and melanophages represent a stimulation of extracutaneous melanocytes that are normally present in the lymph node. Treatment consists of surgical or cryosurgical removal; however, affected horses are predisposed to develop additional tumors over time.

Little is known about the use of radiation or chemotherapy for the treatment of equine melanocytoma or malignant melanoma. Cimetidine was reported to be of value in controlling recurrence, but follow-up studies did not find benefit. Electrochemotherapy or intralesional chemotherapy with cisplatin or carboplatin after surgical debulking may be of benefit in the treatment of large or inoperable masses. Recurrent tumors do not develop resistance to cisplatin, and they can be treated a second time, sometimes with good results.

Melanocytic neoplasms of nongray horses are rare tumors usually found on the trunk and extremities of young (often < 2 years old) horses. They may represent expansion of a congenital lesion. Masses characteristically appear as solitary nodules. Most are benign; however, congenital malignant melanomas may infrequently develop. Such tumors are invasive, with little metastatic potential. Surgical excision or cryosurgery is the treatment of choice. If the tumors are benign and surgically extirpated, the prognosis is excellent. For invasive tumors, the prognosis is guarded.

Tumors of Melanocytic Origin in Pigs

Melanocytic neoplasms of pigs occur as congenital lesions and sporadically in adults of the Sinclair (Hormel) miniature pigs and Duroc and Duroc crosses. Selective breeding in these strains has increased the incidence of tumors. These tumors develop both pre- and postnatally, anywhere on the body. Generally multiple, they can appear as pigmented macules or patches with smooth borders; as raised, often ulcerated pigmented lesions; or as deeper, slightly raised, blue masses. Deeply invasive melanomas are often associated with metastatic disease. The lymph nodes and lungs are the most common sites of metastasis. Not all of these tumors become invasive, and many undergo spontaneous regression associated with an intense lymphocytic infiltrate. Melanocytic lesions in pigs are not treated; because of the heritable nature of the disease, prevention by selective breeding is recommended if lesions are frequently recognized in a herd.

Tumors of Melanocytic Origin in Cattle

Melanocytic neoplasms in cattle develop infrequently anywhere on the body. They can be found at any age but are most commonly recognized in young animals; congenital forms have been recognized. Angus cattle appear to be predisposed. Most commonly, the tumors are large, nodular masses, densely pigmented on cut surface, and benign. Excision is curative for most; however, rare malignant variants have been recognized with distant metastasis.

Tumors of Melanocytic Origin in Sheep

Melanocytic neoplasms in sheep are most common in middle-aged or older animals but have been recognized in neonates. They are most common in Suffolks and Angoras, in which they appear as multiple, densely pigmented dermal or subcutaneous masses. They should be considered malignant; metastasis is common.

Tumors of Melanocytic Origin in Goats

Melanocytic tumors in goats are rare. They are most common in middle-aged or older animals and possibly in Angoras. There may be a site predilection for the coronary band and udder. Lesions are seen as solitary or multiple masses with variable pigmentation on cut surface. Most tend to grow rapidly, and metastasis is common.