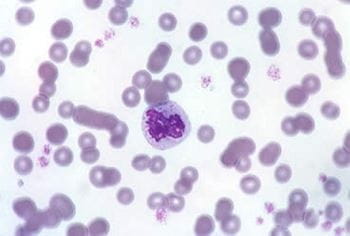 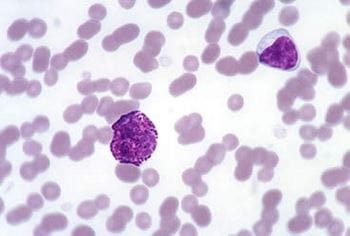 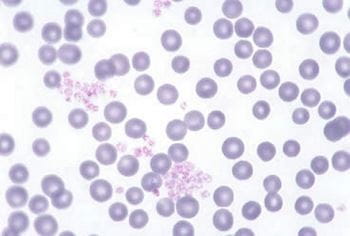 Platelets form the initial hemostatic plug whenever hemorrhage occurs. They also are the source of phospholipid, which is needed for the interaction of coagulation factors to form a fibrin clot. Platelets are produced in the bone marrow from megakaryocytes, under the influence of thrombopoietin. Platelet production begins with invagination of the megakaryocyte cell membrane and the formation of cytoplasmic channels and islands. The cytoplasmic islands produce platelets by fragmentation from the megakaryocyte.

Mature circulating platelets are packed with dense granules containing ATP, adenosine diphosphate (ADP), and calcium, as well as serotonin, lysosomes, glycogen, mitochondria, and an intracellular canalicular system. The mitochondria and glycogen are involved in energy production, and the canalicular system serves both as a transport system for granule components and as a source of phospholipid, which is found in high concentration in the membrane lining of the canals.

When vessel walls are damaged, collagen and tissue factor are exposed, and circulating platelets adhere via von Willebrand factor and undergo a change in shape with the accompanying release of ADP. Local platelet aggregation is stimulated by ADP, with the ultimate formation of the primary platelet plug. The local accumulation of fibrin and platelets is known as a hemostatic plug. The fibrin clot that then forms is consolidated by the action of platelet contractile proteins.

Platelet disorders are either quantitative (thrombocytopenia or thrombocytosis) or qualitative (thrombocytopathy). Thrombocytopenia is one of the most common bleeding disorders of animals. In general, platelet counts must fall to <30,000/μL before the risk of hemorrhage increases. Consumption, destruction, or sequestration of platelets causes thrombocytopenia associated with increased production by the bone marrow. Consumptive thrombocytopenia occurs with massive hemorrhage or with disseminated intravascular coagulation, secondary to a variety of diseases. Destruction occurs in immune-mediated thrombocytopenia, in which platelets become coated with antiplatelet antibodies and are removed from the circulation by the fixed phagocyte system. Excessive sequestration of platelets by an enlarged spleen (hypersplenism) may occur in conditions such as myeloproliferative diseases.

Thrombocytosis is rare and often idiopathic. It may be associated with primary marrow disease such as in megakaryocytic leukemia. It is often associated with chronic blood loss and iron deficiency because of increased platelet production in the marrow reacting to continued consumption and loss.

Thrombocytopathies comprise a poorly defined group of diseases in which platelet numbers are normal but their function is impaired. Von Willebrand disease is characterized primarily by a defect in platelet adhesion to the endothelium. The platelets themselves are normal. Other hereditary disorders of platelet function have been described but are relatively rare. Probably the most common platelet function defect is the irreversible inhibition of thromboxane (which is necessary for platelet aggregation) caused by aspirin administration.

Also see pet health information regarding platelets Platelets of Dogs Platelets are small, cell-like particles produced in the bone marrow and then released into the blood. They function to start the formation of blood clots. Platelets gather where bleeding occurs... read more .