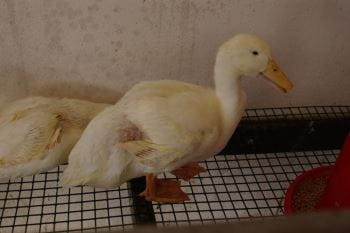 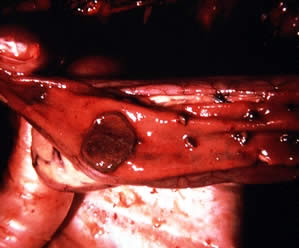 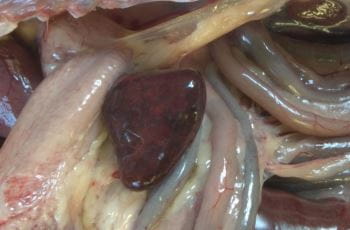 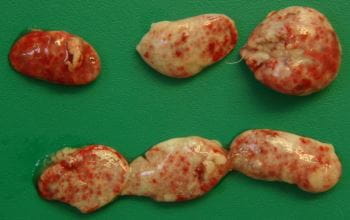 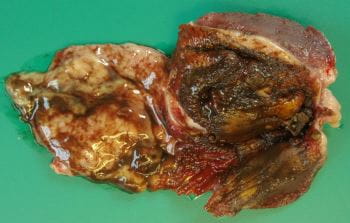 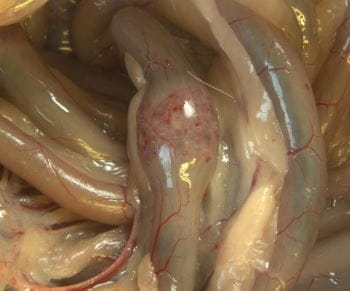 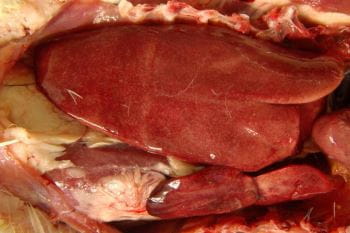 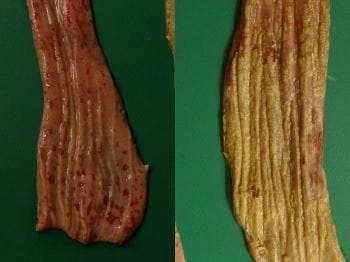 Duck viral enteritis, petechial and ecchymotic hemorrhages and diphtherit...
Duck viral enteritis (DVE) is an acute and often severe disease of both wild and domestic waterfowl induced by Anatid alphaherpesvirus 1. Lesions include generalized hemorrhages and necrosis of the GI mucosa and liver.  Prevention includes biosecurity and avoiding contact with captive waterfowl with wild birds. Some producers in the USA, Canada, and Europe use attenuated-virus vaccines to immunize breeders and ducklings.

Duck viral enteritis (DVE) is an acute, highly contagious disease of ducks, geese, and swans of all ages, characterized by sudden death, high mortality (particularly among older ducks), and hemorrhages and necrosis in internal organs. DVE has been reported in domestic and wild waterfowl in Europe, Asia, North America, and Africa, resulting in limited to serious economic losses on domestic duck farms and sporadic, limited to massive die-offs in wild waterfowl. In the USA, considerable losses due to DVE have been reported in the concentrated duck-producing areas on Long Island, New York.

Members of the family Anatidae (ducks, geese, and swans) are the natural hosts for the virus. There are differences in susceptibility to the virus, with Muscovy ducks being the most susceptible. However, naturally occurring infections have been reported in a variety of domestic ducks such as Pekin, Khaki Campbell, Indian runners, and mixed breeds. The age at infection ranges from 7 days to maturity. The infection has not been reported in other avian species, mammals, or people and does not pose a zoonotic risk.

The causative agent of duck viral enteritis (species Anatid herpesvirus 1) is a member of the family Herpesviridae, subfamily Alphaherpesvirinae, and genus Mardivirus. Field strains of this virus display differences in virulence, but all seem to be immunologically identical. The virus is sensitive to lipid solvents and heat (10 minutes at 56°C [132.8°F]). Significant titer reduction is observed at pH 5, 6, and 10; rapid inactivation occurs at pH 3 and 11.

The virus induces vascular damage, especially in smaller blood vessels, venules, and capillaries. This results in the development of generalized hemorrhages and progressive degenerative changes of parenchymatous organs. It has been proposed that apoptosis and necrosis of lymphocytes induced by this virus may result in lymphoid depletion and possibly immunosuppression. An immunosuppressive state induced by DVE may also explain the presence of secondary infections by Pasteurella multocida, Riemerella anatipestifer, and Escherichia coli, which are frequently seen in natural outbreaks of DVE in ducklings.

The virus causing duck viral enteritis is mainly transmitted by direct contact from infected to susceptible ducks or by indirect contact with a contaminated environment. Water seems to be a natural route of viral transmission. Outbreaks are frequent in duck flocks with access to bodies of water cohabited with free-living waterfowl. Parenteral, intranasal, or oral administration of infected tissues can establish experimental infection. A carrier condition is suspected in wild birds. Recovered birds become latently infected carriers and may shed the virus periodically.

DVE virus may undergo latency like other herpesviruses, and the trigeminal ganglion seems to be a latency site for the virus. Recovered birds may carry the virus in its latent form, and viral reactivation may be the cause of outbreaks in susceptible wild and domestic ducks. One study demonstrated that captive-reared and released Mallard ducks can be infected with the virus, and those latently affected may potentially transmit the virus to native waterfowl when they are released.

The incubation period is 3–7 days. Sudden high and persistent mortality is often the first sign of the disease. The mortality rate varies and can be 5%–100%, depending on virulence of the infecting viral strain. Adult ducks usually die in higher proportions than young ones, increasing the economic significance of the disease. Sick birds are unable to stand, and they show indication of weakness and depression. Photophobia, inappetence, extreme thirst, droopiness, ataxia, nasal discharge, soiled vents, and watery or bloody diarrhea may be seen. Adult ducks may die in good flesh. In contrast, ducklings frequently show dehydration and weight loss as well as blue beaks and blood-stained vents. Dead males may have prolapse of the penis. In laying flocks, egg production may drop sharply.

Lesions from duck viral enteritis are indicative of DIC and necrosis of the mucosa and submucosa of the GI tract and lymphoid tissues. Damage of blood vessels throughout the body induces hemorrhages in various tissues or the presence of free blood in body cavities. Petechial and ecchymotic hemorrhages on the heart (“paint brush” appearance), liver, pancreas, mesentery, and other organs are characteristic.

Mucosal eruptions, found in the oral cavity, esophagus, ceca, rectum, and cloaca, undergo progressive alteration during the course of the disease. Macular hemorrhages initially develop into elevated, yellowish, crusted plaques and organize into green, superficial scabs, which may coalesce into large, patchy, diphtheritic membranes. The mucosal lesions align parallel with the longitudinal folds in the esophagus. Diphtheritic esophagitis may be commonly seen in swans. Lumina of the intestines and gizzard are often filled with blood. The liver is enlarged, pale copper in color, and may have pinpoint surface hemorrhages mixed with white necrotic foci. The pancreas may have petechiation and multifocal necrosis.

The lymphoid organs are severely affected; the spleen may be normal or smaller in size and darkened due to congestion. The thymic lobes may be petechiated, and thymic atrophy has been reported with some strains. The bursa of Fabricius may be severely congested or hemorrhagic. In ducklings, the lesions of the lymphoid tissues are more evident than the lesions in other visceral organs. Hemorrhagic annular bands can be seen in different portions of the intestines, which correspond to necrosis and hemorrhage of the gut-associated lymphoid tissue. In geese, intestinal lymphoid disks are analogous to the annular bands in ducks, and “button-like" ulcers may be seen.

A lesion that can be easily detected on necropsy is a clear, yellow fluid that infiltrates and discolors the subcutaneous tissues from the thoracic inlet to the upper third of the neck. In mature hens, hemorrhages maybe seen in deformed and discolored ovarian follicles, and ruptured yolk and free blood may be found in the abdominal cavity.

Presumptive diagnosis of duck viral enteritis is based on disease history and lesions. Definitive diagnosis may require viral isolation or identification of DVE. Different diagnostic protocols based on PCR are available, either by conventional or quantitative real-time PCR. These molecular techniques provide much more rapid and efficient diagnosis of this disease than other methods. The tissues to collect are liver, spleen, esophagus, and portions of small intestine that show suggestive lesions.

Serologic tests have little value in the diagnosis of acute infections. Serum neutralization tests have been used to monitor exposure to the virus in wildfowl.

Differential diagnoses should include:

There is no treatment for duck viral enteritis. Contact with wild, free-flying waterfowl and direct or indirect contact with contaminated birds or material (free-flowing water) should be avoided. Control is effected by depopulation, removal of birds from the infected environment, sanitation, and disinfection. Prevention is based on maintenance of susceptible birds in a disease-free environment or immunization. A chicken-embryo-adapted, modified-live virus vaccine has been approved in the USA to immunize domestic ducks in zoologic aviaries and by private aviculturists. A 0.5-mL dose is administered SC or IM to domestic ducklings >2 weeks old. Breeding flocks should be revaccinated annually. The vaccine can be used in an outbreak because it elicits rapid protection after vaccination. It is not approved for use in wild ducks. An inactivated vaccine, which appears to be as efficacious as the modified-live vaccine, has not been tested on a large scale and is not currently licensed.

Hexamitiasis in Poultry
Others also read

Overview of Viral Encephalitides in Poultry